Resident Evil 5 is a great game. The art is beautiful, the control is dead-on, the challenges are well designed and the difficulty curve is just the right kind of x^2. There are some flaws–the story is bombastic and inane, the main character looks like he has hams for forearms, and the moment-to-moment game play barely resembles the games that made the series famous. But those are relatively minor flaws; over all, Resident Evil 5 is a well-made, fun, action-packed game.

It’s just not that great of a horror game.

Don’t get me wrong–RE5 tries hard to pull horror off given its action-packed game mechanics. All of the Resident Evil tropes are accounted for: zombie dogs, mysterious laboratories, people changing into giant tentacle monsters, and protagonists shooting said tentacle monsters with rocket launchers from escaping helicopters. Even many of the game play tropes have survived; the safe room / item box has transformed into a UI screen in-between levels, and the two character mode found briefly in almost every Resident Evil game (and the subject of Resident Evil 0) has been brought to the fore and online-ified. There are zombies, exploding heads, foreboding hallways, reports and diaries to read, et cetera–all of the details that you would expect from any Resident Evil game are present.

The problem is, these classic elements are all secondary traits to the game’s primary interest: action. The action-oriented game play doesn’t directly negate the horror elements of Resident Evil 5, but you can see that the development team’s focus was on making the explosions look cool rather than designing tension-inducing sequences. The spotlight is on the gun play, the enemy combat, and the (incredibly trite) epic battle between good and nonsensical evil. Which means that the horror elements, while present, feel like an afterthought.

I know that a lot of people have argued that Resident Evil 4 and 5 are not horror games because the emphasis on action robs them of their ability to scare. I don’t think that’s true; both games are capable of inducing tension, usually by throwing the player into a situation where they have limited resources and must overcome overwhelming odds by playing as perfectly as possible. That’s pretty much how the Resident Evil games have always worked–it’s just that the details have changed. “Playing perfectly” no longer means “find the fastest path between point A and point B while avoiding combat at all costs,” now it’s more like “defeat the following wave of 100 enemies given only the resources in your current possession.” But the effect is the same.

No, it’s not that horror and action are mutually exclusive elements, it’s that horror is a muscle that Resident Evil 5 simply chooses not to flex. There are a few moments in the game where the horror stuff takes over and those brief sections are a seat-of-your-pants experience. But the goal of the designers was not to make an action game with horror elements, not a horror game with action elements, and this decision shows.

Still, there are a few key design characteristics that help make the game play in Resident Evil 5 shine.

The decision to prevent movement while shooting has been decried up and down the halls of the internet as being “outdated,” but it absolutely makes Resident Evil 5 a fun game. The reason is that combat becomes much, much more intimate; the enemies are charging you and you can either run or fight, but not both at the same time. If you choose to run, you better be fast. If you choose to fight, the focus is on precision aiming and a misplaced shot could mean death. Either way the tension level induced by the combat is way, way higher than similar games in this genre, including Dead Space, Gears of War, and Dark Sector.

The inventory management has been dumbed down a lot since Resident Evil 4 (which is a shame), but the way that it fits into the death-respawn-retry cycle is genius. You get a chance to adjust your inventory and upgrade your weapons every time you start a level or restart at a checkpoint after death. This means that, while resource management is a problem in the very short term, it’s never an issue over the entire term of the game. One of the most difficult aspects of the original Resident Evil games is that you could play for hours and then suddenly run out of resources; if you didn’t have a save from far enough back in time the only solution was to start the game over and play more frugally. As Richard Rouse points out, Resident Evil 4 was designed to appeal to a much wider audience, and one of the things it did (in addition to making the control scheme and camera agree) was remove resource management as an axis for failure. Resident Evil 5 does it one better by keeping resource management gameplay as part of the equation (and rewarding people who, like me, are still in the habit of hoarding all ammo and health for some future boss), but making it a short-term, tactical problem. The player must decide what to bring into the next room, not what he’s going to need three hours from now. I commended Condemned for accomplishing the same thing by making combat very hard but sprinkling health packs all over the levels, but Resident Evil 5’s approach, while a bit more heavy handed, extends to all of the resource types in the game.

Trite as the story is, it’s well told. I commented about this while playing the game, and it’s worth mentioning here again. The game is chalk-full of details about the characters and backstory, and if the player is interested there’s a whole lot of exploring to do. Dead Space made a pretty good attempt at this too (though its story was also lame for different reasons), but I think Resident Evil 5 does it better. Both of these games are still learning how to integrate dialog, text, and other types of narrative bits into an action-centric game from titles like Bioshock, but the results are not bad.

It’s just that, when all is said and done, the game’s not too scary because it doesn’t care to be. Rather than be Alien or Aliens, it’s gone for Independence Day. And that’s fine–there’s room in the genre for big, bombastic horror games that could be more effective but choose to put their efforts elsewhere. I have to admit, however, that as tired as the old Resident Evil format was, I find myself missing many of its classic elements, especially when I see them being reused in this most recent iteration of the franchise. 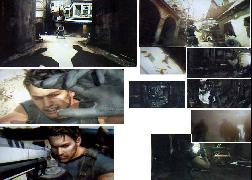