Usually when I finish a game I try to write a review for it as quickly as possible, while the experience is still fresh in my mind. My goal with reviews is to get the feeling of playing the game across to my readers–I’m not so interested in just enumerating the whiz-bang graphics features or pointing out every functional flaw in a given game. If too much time passes between my completion of a game and my review, I worry that I will not be able to capture the essence of playing the game effectively. That’s why some key horror games (such as Silent Hill 2) have no review; I didn’t write one early enough and now I don’t feel like I could without playing the game through again.

But in the case of Dead Space, I finished the game a few days ago and have had a really hard time figuring out what I want to say about it. The thing about Dead Space is, I didn’t like it all that much, but I am not exactly sure what about the game turned me off. It’s not the technical execution; that area is flawless. It’s not the game play–it would be hypocritical for me to criticize a game so similar in game play to Resident Evil 4, which I loved. There are no obvious problems with the pacing, or the enemy design, or the dialog, or anything like that. Dead Space is a very slick game, made by a team of extremely hardworking pros. And yet, something about it just doesn’t sit right with me, and I’ve delayed writing this review to try to figure out what the problem is.

Dead Space is a horror game that takes place on a derelict space ship sometime in the relatively far future. A small crew arrives to respond to a distress call and finds the ship abandoned and completely devoid of life. At least that’s what they think until the lights go out and big fleshy things with blade-arms start cutting them to pieces. The protagonist is Isaac, an engineer who, with the help of a few other survivors, must try to find a way to get off the ship and while he’s at it maybe make sure that the alien monstrosities that inhabit the vessel are driven extinct. Oh yeah, and his fiance was aboard this ship too, so it would be good if he located her as well. Basically it’s the same setup as the plot from Event Horizon.

The moment-to-moment game play is almost completely lifted from Resident Evil 4. The key differentiation points are that Isaac can move and shoot at the same time, that the way to kill enemies is to shoot off their limbs, and that he can apply telekinesis or a time slowdown effect to enemies to help him slaughter them more effectively. And in fact, it is these derivations where the game is strongest; stopping an enemy in mid launch with the time slowdown power and then leisurely shooting off its limbs to see the blood spray in slow motion is a treat. The rest of the design is very much the RE4 formula: there’s a store where weapons can be purchased or sold, a shooting gallery mini game, melee combat that acts as a way to open storage boxes and as a close-range quick attack, laser sights and a focus on localized targeting, the same over-the-right-shoulder camera system, a special, unkillable enemy, scenes of the protagonist being decapitated by enemies when the killing blow is dealt, an inventory of limited size, items that can be upgraded by combining them with other items found in the world, boss fights involving tentacles that must by individually shot, et cetera et cetera. I am sure that the basic design for Dead Space began as “Resident Evil 4 in space,” and the influence of Capcom’s revolutionary title really shows. It’s almost as if some of the design choices were made just because they also existed in Resident Evil.

Which isn’t a bad thing. RE4 is a great game and it is a great model for other games to follow. Dead Space does an admirable job of retracing the path that RE4 blazed, and it lays claim to a number of unique innovations too (in addition to the interesting combat system, the HUD system is pretty awesome and I haven’t seen the time slowdown power used outside of Viewtiful Joe). By any technical standard, Dead Space is a well-made game. And on top of that, it’s pretty fun to play. Like I said, nothing obviously wrong here.

I also need to give some serious props to the sound system in particular. The sounds in Dead Space are great, but the sound system is phenomenal. The system is capable of reacting to real-time play scenarios and it’s really good at picking out contextually appropriate sounds. I really liked how a stinger is automatically played when an enemy surprises you and the camera swings it into view for the first time; even the volume of these stingers seems to be adjusted dynamically depending on the content of the scene. I was very impressed with the sound in Dead Space, and I think it’s easily the strongest piece of the game’s attempt to build tension.

But there is something missing from the whole formula. Some key element that, in its absence, prevents Dead Space from rising above “merely entertaining.” All the pieces are in place but they just never click together. Dead Space is a deep dish pizza with all the toppings and five different types of cheeses that tastes inexplicably bland. I racked my brain to figure out what it is that Dead Space is missing, and the best I could do was decide that the game lacks soul.

But then it occurred to me that it might not just be one particular problem. Maybe there are several individually minor issues that in sum somehow suck some of the life out of this game. With that in mind I came up with the following list of reasons I think Dead Space is less compelling than it should be:

Ultimately, I think my problem with Dead Space is that it didn’t require me to think about anything. I really like seeking out the extra content in this kind of game, be it ammo packs tucked away in the corner of a level or ancillary plot content that helps flesh out the game scenario; I enjoy games that dangle little clues about the plot in front of me and let me try to piece them together in my head. Dead Space doesn’t have any of this; it’s just way too straightforward. The game play is fine, the graphics are hot, the production quality is universally high. But that’s all there is to it–there’s nothing here requiring any sort of problem solving or cognitive reasoning. Your thumbs get a work out and your eyes get some candy but your brain can fall asleep. I felt the same way about Gears of War.

I should mention that multiple people have told me that the real magic of the Dead Space design isn’t really evident on the Normal difficulty, and playing on Hard is a significantly better experience. I can see how that might be true; anything that requires the formulation of a strategy or any kind of other critical thinking would help this game be a lot more fun and a lot more scary. My experience, however, was that it’s an extremely well produced game that I had a lot of trouble staying interested in. 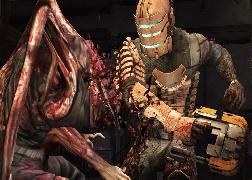 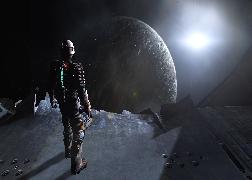 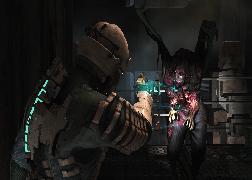 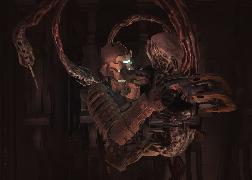