Alan Wake does not bill itself as a horror game. It’s a “psychological action thriller,” which is a label that very clearly describes what the game is about. There are supernatural elements, sure; the protagonist for which the game is named spends most of his time fighting The Taken, people who have been possessed and entirely consumed by an evil force called The Dark Presence. But it’s really not a horror game, and makes almost no concerted effort to scare. However, pending the creation of Chris’ Psychological Action Thriller Quest, I feel pretty comfortable including Alan Wake here; even if it’s not really a horror game, it’s in the company of friends.

It’s hard to write about Alan Wake without revealing parts of the story, which is very much worth experiencing in its original game form. In the interest of keeping this spoiler free, I’m going to talk about Alan Wake in terms of its successes and failures without a lot of actual examples.

The core game loop in Alan Wake is surprisingly similar to Obscure (though there’s no two-player mode, sigh). The central combat mechanic involves using a flashlight (which can be boosted for a short amount of time) to burn away a nebulous darkness that protects The Taken. Once the darkness is gone, you can take them down with regular pistols. This is very similar to Obscure, though the execution is much better than in Hydravision’s earlier example. A typical moment in Alan Wake will involve Wake running through a dark forest when he is suddenly jumped by a couple of scythe-wielding Taken. Guns are ineffective until the protective darkness has been burned away, so the moment-to-moment play consists of dodging away from attacks, keeping the light on each enemy, and then taking them down when they are vulnerable. There are a few other weapons occasionally at Wake’s disposal, such as flare guns and flashbangs, which are highly effective. But most of the game is just running around in the dark, getting jumped by guys, and shooting them.

And, as far as horror games go, that’s a pretty simple core loop. It’s very common for horror games to select simplified combat mechanics in exchange for improved narrative control, so Alan Wake is hardly alone here, but the effect of its simpleness is amplified because the main focus of the game is, unlike many other horror games, action. If you’ve seen reviews lamenting Wake as “repetitive,” it’s probably because people got tired of shooting guys in a dark forest after a while. I can see where they are coming from.

On the other hand, Alan Wake goes all out in its attempt to increase its interestingness along another axis: narrative. Unlike many of the other games on this site, Wake’s narrative is not one of these combination-of-confusing-details sort of thing; though the story itself is a little convoluted, it plays out in a very straightforward fashion. As I said in the opening, it’s almost impossible to talk about the story in Alan Wake without spoiling something, so I’ll just say that the story in Wake is pretty good. It’s got that Stephen King-esque taint-of-evil-hiding-in-rural-America style down pat, and throws in a fairly interesting twist to the whole thing (which, at the end of the game, left me wondering how it could all work out, like a time travel movie in which a character kills his father). Alan Wake’s narrative unfolds in two different, though not entirely orthogonal, directions: as cut scenes and game events which take place as you play, and as bits of manuscript that Wake finds throughout the levels. The way these two connect is pretty interesting; though lots of horror games have documents and manuscripts to find, none of them work quite in the same way as the ones in Wake.

In addition, the writing and dialog in Alan Wake is really good. In particular, Wake’s agent Barry steals the show. But even Wake himself is pretty interesting, and there are several other complicated (for a video game) characters that make their appearance. The manuscript pages themselves are excerpts from an unfinished novel of Wake’s, and remind me of the novel snippets in Deus Ex, although in this game the content is much more directly related to the events of the game. I think the narrative is easily the strongest part of Alan Wake.

Alan Wake is also one of the most beautiful games I’ve ever seen. The characters are a little weird (damn you, uncanny valley), but the environmental art is absolutely phenomenal. Seriously, I’m not really the type of gamer that cares about graphics, but Alan Wake is a really, really nice looking game.

Where things start to go astray is the level design and combat loop. The combat loop, as I mentioned before, is pretty simple, but its simplicity isn’t a problem in and of itself. Rather, the way that enemies appear is a little problematic. Wake will often be running through a forest when suddenly it gets a little darker, and shadows seem to move quickly across the landscape. This is your cue that enemies are about, and you should expect to be attacked in the next minute or two. Since the game takes place in large, open areas, enemies will often approach Wake from the side or from behind. To deal with this problem, the game has a pretty cool effect where it slows time down, pans the camera out to reveal the approaching enemy, and plays a tension-increasing stinger sound, all at the same time. The result is that you see approaching enemies, even those behind you, in a way that gets your blood pumping.

This works really well at first, but once the enemies have been revealed game waits for a while before using the effect again. During a given fight, enemies tend to come from all directions, so it’s not uncommon to be attacked by guys that are behind you. It really sucks to get hit by somebody you can’t see, and that problem is aggravated by ranged enemies that throw blades at you. Even worse, Wake can take hits while he is already reacting to another hit, meaning that if you have bad luck and are hit by two or three guys at the same time, it’s basically instant death.

The levels are also quite large; the traversable space is sometimes so wide (especially in the forest) that it’s hard to tell which way you should be going. Alan Wake actually provides a really cool HUD to solve this (something I haven’t seen before, a sort of “this general direction” cursor), but during a fight it’s very easy to get disoriented. And since almost every level takes place at night, the darkness of the environment adds to the confusion.

But the large level design actually hurts Alan Wake in another, more important way: it makes exploring for the purposes of item collection a chore. I ranted about this a bit already, but the size of the levels conflicts with Alan Wake’s collection quests. Most importantly, it makes finding the manuscript pages, which is the key element that keeps the game interesting in the face of its somewhat simple game play, pretty unfun. It turns out that most (but not all!) of the pages are placed in places that you’ll naturally run across just by playing, but as a player there’s no way that you can be guaranteed to find every page unless you carefully search each area. I went over each level with a fine tooth comb because I really wanted to read all the manuscripts, and let me tell you, walking around it a super dark forest tracing the edges of the accessible space is not very fun (and, despite my best efforts, I still didn’t find every page). These levels were not made to be ransacked–they were made to be fairly linear passages for the player as he travels from one scene to the next. But because the placement of the manuscript pages (and, to a much lesser extent, the collectable coffee thermoses) is unpredictable, a player must choose to either sweep every level for hidden items or run straight through and live with a lot less story detail. It sucks that those two are in conflict and such a decision is even necessary.

And that’s really the only major misstep that Alan Wake makes. It’s not a complicated game (other than the graphics tech–sheesh), but it also hits the mark most of the time. I felt that confusion about the levels, the placement of collectables, and some of the combat mechanics damaged the game a bit, but on the other hand I enjoyed the interesting story, I liked the presentation format that it used, and I really liked the characters that it stars. There are no problems with controls or anything like that–Alan Wake doesn’t waste any time on pedestrian design flaws, but it does get bogged down with a few meta-flaws.

Still, it’s a very fun game and, despite being steeped in classic American horror, it’s pretty unique in this genre. Though simple, I think it’s the kind of thing that pretty much every horror fan will enjoy. 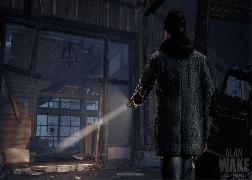 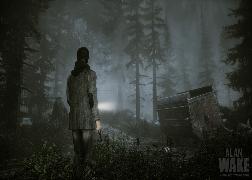 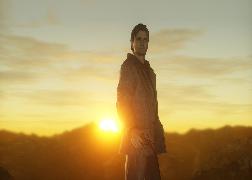 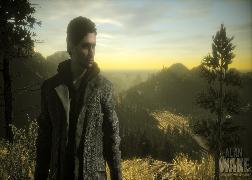 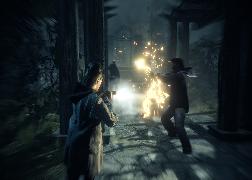 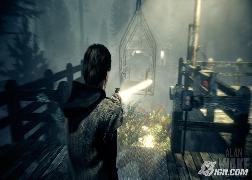