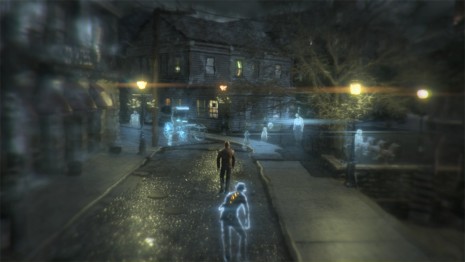 The intertwining of the ghost and human worlds is fantastic.

I wasn’t planning on buying a next gen console, at least not for a while. I have a giant stack of games for older consoles that I should play first, and besides, I’m out of HDMI ports.  But when a friend offered me his Xbox One for $100, I couldn’t pass it up.  The only game on the platform that I really wanted to play was D4: Dark Dreams Don’t Die, which was worth the cost alone (seriously, if you read this site and haven’t played D4 yet, go correct that now).

After playing some frustrating bits of The Evil Within and finishing Outlast, I moved on to Murdered: Soul Suspect.  Murdered got pretty mediocre reviews, but I had a good time with it.  The conceit is that you’re the ghost of a cop who’s been murdered and must now track down his killer.  The actual tracking down involves walking around through walls, possessing people to hear their thoughts and manipulate them, and solving mystery puzzles by gathering clues.

The basic ghost mechanics in Murdered are the real draw here: walking around through walls never felt so good.  The world is also densely populated with little snippets of story–other ghosts to talk to, spooky dialogs that can be unlocked by finding hidden items, the thoughts of the living, not to mention the main story arc, which is steeped in Salem, Massachusetts’s legitimately crazy history.  For me, wandering the world as a ghost, picking up bits and pieces of other people’s lives on the way, and searching crime scenes for clues was the entertaining thing about Murdered.  There are times when I would simply ignore the main path and venture off into the world in search of small stories. 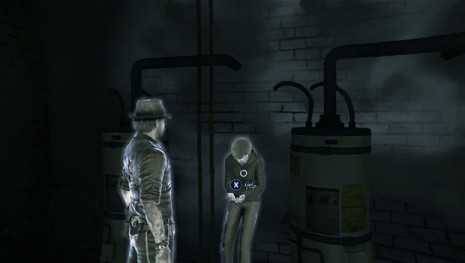 Finding other ghosts and hearing their stories is a treat.

Less fun, and less carefully implemented, are the “gamey” parts of the game.  As a ghost, the main character (an unlikely ex-con-turned-police-detective named Ronan) occasionally has to contend with demons, select the correct answers to quizzes, and figure out how to traverse past areas that ghosts cannot touch.  These bits, particularly the demon segments, are pretty frustrating.  The demons look cool, but to kill them you have to sneak up behind them and do a quick timer event, which is easy to flub.  You can sneak past them at first, but later in the game you have no choice but to take them out.  It’s a pretty shallow mechanic to begin with, but it’s spread way too thin over the course of the game.  Similarly, the cool crime scene investigation mode is followed by a lame connect-the-clues puzzle where the real challenge is to figure out what question the game is trying to ask.

As I played I felt increasingly convinced that the game would be better with less game play.  What I want is to walk around as a ghost and discover stories, either by meeting other ghosts or eavesdropping on the living. Murdered is almost the most AAA walking simulator ever made.  But then it goes and tries to inject some mechanics, mechanics which really can’t support the entire weight of the game, but are given the task nonetheless.

Looking at the reviews of this title, it’s clear that some journalists only saw (or only considered) the mechanical aspects of Murdered in their review.  Others, like me, enjoyed the real mechanic (story snippet exploration) and came a way with a more favorable impression, despite the flaws.  It’s a shame, really.  Airtight Games closed its doors immediately after Murdered shipped, and it will probably be a long while before we see another non-indie walking simulator (or, as I like to call them, exploratory non-combat horror games) of this scope or pedigree.