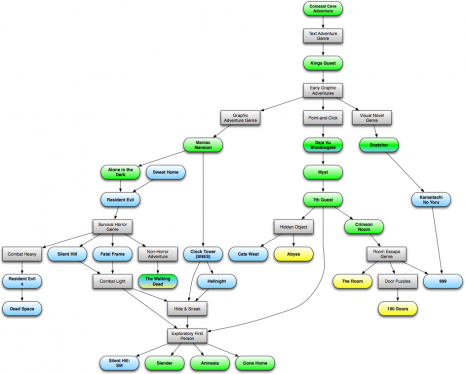 I gave an IGDA talk a few years ago about the horror genre’s roots in Adventure games.  You can draw a line of influence, I argued, from Colossal Cave Adventure and King’s Quest all the way through modern titles like Slender and Amnesia: The Dark Descent.  This line, which crosses through all of the survival horror classics, is best understood in terms of feature iteration: each new derivation adds new features and drops some of the traits of its predecessors, and the rest stays the same.  Resident Evil is an iteration of Alone in the Dark which added item rationing, inventory management, and puzzle interfaces to the formula.  Alone in the Dark itself was an iteration of early Graphic Adventure games like Maniac Mansion that added real-time combat and third-person player-centric control to the mix.  Like Y-Chromosome DNA tracing, we can understand the lineage of these games by following the addition and removal of features to the core design over time.  If you’re interested in this idea, you can download my slides from this talk.

Looking at game design this way, at the mutation of a core feature set over time, reveals some interesting patterns.  One thing I learned was that horror games reached “peak complexity” with Resident Evil 4.  Resident Evil 4 has nearly every feature of its predecessors and a few more to boot.  Part of what made that title so outstanding, and so difficult to duplicate, was the shear volume and intricacy of its game systems.  After Resident Evil 4, popular horror games tended to shed more features than they added.  Silent Hill: Shattered Memories, Amnesia: The Dark Descent, and Slender were all part of a new wave that removed as many design features as possible, starting with combat.  The Resident Evil titles went the other direction, adding features and game modes until they became top-heavy and nonsensical.  Unable to find a balance between the various game systems it wanted to include, Capcom duct-taped four mediocre games from different genres together and called it Resident Evil 6.

It is within this context, then, that Resident Evil 7 is something of a revelation.  It is unquestionably the best Resident Evil game since Resident Evil 4 (which is over a decade old now!), and it can easily compete with some of the earlier gems of the series like Code: Veronica.  What is most impressive about Resident Evil 7 is how simple it is.  The game system tropes are all there, but in miniature.  Combat, puzzles, item management, keys items, and locked doors all make an appearance, but only as supporting actors.  The focus is on exploration above all else, and nearly all of the game design effort has gone into making the environment detailed and intimate.  Put in terms of my feature variance chart, Resident Evil 7 is the equivalent of shaving your head, giving up all of your worldly possessions, and becoming a monk.

This is particularly significant for a series known for bombast rather than subtlety.  The over-the-top tentacle creatures and daring helicopter escapes that have been a mainstay of the Resident Evil series for twenty years still make an appearance, but like other hallmarks they have been reduced to a footnote.  The focus in Resident Evil 7 is intimate environments and high fidelity interactions, and in that respect it has more in common with Amnesia than its predecessors.

Indeed, similarities to the seminal PC horror title abound: in addition to being a first-person flashlight crawler with maximum drawer-sifting game play, RE7 forces you to run and hide from relentless, unkillable enemies.  Resident Evil has a history of exceptionally tough and occasionally invincible antagonists designed to knock their superhuman protagonists down to size.  But in RE7, the protagonist is already disempowered, often has no weapons, and his recourse is almost always to run for cover.  And like Amnesia, cover isn’t always easy to find.  There are no Clock Tower-style pre-determined hiding spots: you just cower behind a rotting couch or something and hope that Leatherface’s dad runs out of gas for his chainsaw before he finds you.  This isn’t just a mutation of the core feature set, it’s a significant shift in tone. 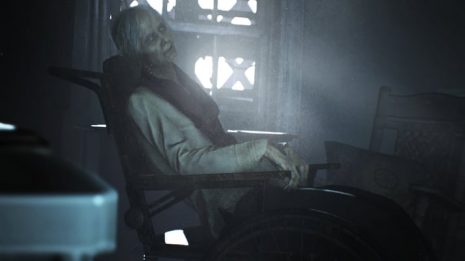 This doesn’t look like a Resident Evil game, and that’s great.

Resident Evil 7 is a contemporary horror game that is hyper aware of the other players in its genre.  In addition to Amnesia, we can see clear influence from P.T., primarily in the awesome playable videotape system, which is used to foreshadow areas the player will subsequently explore.  P.T. was also the obvious influencer of Capcom’s early Kitchen demos (which displayed a VR scene using RE7 settings and characters without revealing the connection to the RE license), as well as the release of a “playable hour” demo six months early.  This is the first Resident Evil to flirt with an etherial, supernatural antagonist (before eventually, and somewhat awkwardly, tying everything back to yet-more-corporate-bioweapons), which has become a common conceit in modern indie horror.  And it’s the first Resident Evil to include complex, multi-step escape-the-room style puzzles (most obviously in the form of Lucas’ birthday cake puzzle).  I wonder if this title features a scary version of the folk song Go Tell Aunt Rhody because Until Dawn has a scary version of O Death.  For a series that has alternated between radical innovation and dated chunkiness, Resident Evil 7 feels uniquely current.  On the Influence Lineage chart, Resident Evil 7 would appear way down at the bottom, directly descended from modern PC horror design.

It goes without saying that the production quality of Capcom’s latest endeavor is, as usual, exceptional.  What is more interesting to me, and significantly more surprising, is how far down the genre spectrum they were able to move Resident Evil 7 without losing its soul.  Resident Evil 7 is a tight, contemporary game that is designed to modernize the dated trademarks of its predecessors, a task that it executes with significant skill.  It is the rare title that has retained much of its core DNA and yet shed its sequel baggage like a snake discarding its skin.