Though it’s not a hard and fast rule, I almost never play games the moment that they come out.  I’m too busy, or I’m in the middle of something else, or (more often than I’d like to admit) I don’t even realize that a game I’m interested in has shipped.  I miss out on a little of the zeitgeist that surrounds the launch of important games, but generally I feel better equipped to analyze (and enjoy!) a title with a little distance.

Here are some of the games I played in 2018.  Not all of them shipped in 2018, but I played them last year so they are 2018 titles to me.  I’ve omitted VR games from this list as I work closely with many of the developers who produced my favorite VR titles this year, and so calling them out seems a little disingenuous.

Zero Time Delimma is the third game in the Zero Escape series.  Like its predecessors (999 and Virtue’s Last Reward), it is a puzzle-laden visual novel that operates on a (genius) trick.  This series is the most self-aware video game series I have ever played.  Not only is it built around the way games are actually played, it takes advantage of those patterns in fascinating ways.

Danganronpa 2 and Danganronpa V3. Like the Zero Escape series, Danganronpa grew out of the visual novel genre, and alternates between wacky characters and deadly serious murder mysteries.  These games try different approaches to world exploration, but the real magic (and massive frustration) is all in the class trials that reveal the killer behind every murder.  This series has struggled with finding ways to mix mechanical challenges with the long expository sequences common to visual novels, and though it’s not perfect, the story itself carries it through the rough patches.

OK, you’ve got my attention.

MUVLUV Extra.  The jury is still out on this one.  After hearing that Hajime Isayama got the idea for Attack on Titan from a video game, I was determined to figure out what it was.  I was surprised to find out that he was referring to a visual novel series called MUVLUV, specifically MUVLUV Alternative, the third game in a series that started off as an adult visual novel.  These days the naughty bits have been removed and the series ships for consoles and Steam.  The Steam reviews for MUVLUV Alternative are fascinating, with many players with hours and hours of game time on record claiming that the title fundamentally changed their life.  I am not a fan of visual novels (with the massive exception of the two series I just wrote about above, and Kamaitachi No Yoru), but after reading all that my interest was piqued.  Apparently the third game can only be understood after the first two have been completed, so I dove in with the first MUVLUV this winter.

So far the results are pretty disappointing.  MUVLUV Extra is exactly what you would expect from the visual novel genre: you play as a high school boy who must select one of his busty classmates (all of which are secretly in love with him) as his mate.  The writing is funny and the characters are not entirely one dimensional, but yep, it’s a visual novel dating game with no hint of turning into something more.  I’ll report back after I’ve finished the other two games in the series.  Fingers crossed this time investment pays off.

Doki Doki Literature Club is a parody of what MUVLUV Extra is exactly, with some fun twists and a couple of super great puzzles.  It’s free and you should play it.  It takes a little too long to become interesting, but stick with it.

World of Horror.  A Japan-themed game that looks like an old B&W Mac game?  This is so, so my jam. 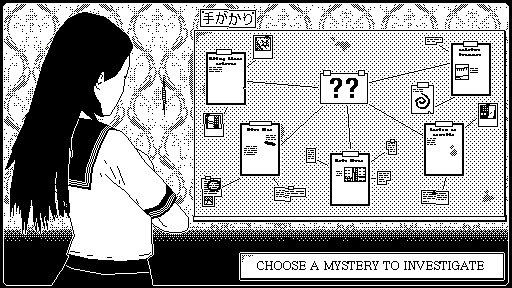 White Day is a remake (by the original director) of a 2001 Korean horror game by the same name.  These days it’s cleaned up nice and you can play it on a PC or PS4.  It’s exactly the kind of game I want to play (and pretty similar to the types of games I want to make), but suffers from a punishing stealth system that blocks all progression for hours at a time.  Meh.

Yomawari 2.  It’s exactly like Yomawari, which I adored.  These games do not care about you.  You will die.  Don’t let the cute RPG art style fool you.  These games are out for blood.

Detention. A Taiwanese side scroller horror game that is a) super scary and b) super interesting.  Exactly the combination I am looking for in an horror game.  Play this.

The Evil Within. My entire review of The Evil Within is summed up by this screenshot of a bird with a collectable item on its back standing in the middle of the air where the item cannot be collected. 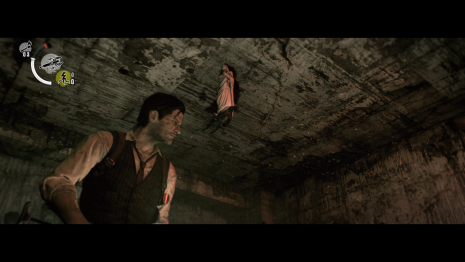 The Evil Within 2. Much better than its predecessor.  Some really nice scenes.  Story doesn’t matter.  Too long.

Stories Untold. A series of interactive puzzles that, over time, become a single narrative.  The presentation quality is top notch (if a little too Stranger Things) and the puzzles themselves are pretty fun (I liked the text adventure the best).

Thimbleweed Park. A great adventure game by the guy who invented adventure games.  So many lovely modernizations and little innovations to fans of the genre.

Virginia. Lots of game designers secretly wish they were film directors, but  this is probably the first time I’ve played a game that actually is (pretty much) a film.  Super interesting approach.  I wonder if this style is repeatable.

Zelda: Breath of the Wild. Amazing achievement in the history of video games.  The first Zelda game I have ever enjoyed.

Hidden My Game By Mom 3.  This is what your phone was made for. 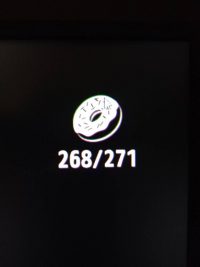 These last three fucking doughnuts are going to kill me.

The MISSING: J.J. Macfield and the Island of Memories.  The first release from SWERY’s new studio is a queer platformer in which the protagonist has to intentionally hurt herself by jumping into spinning blades and setting herself on fire in order to progress.  Like all SWERY games, the mechanical challenges (which are good and hard) yield new story details, which in turn make the level mechanics more interesting.  One of the best bits is the story reveal mechanism itself: you learn about the protagonist and her friends by reading text messages on her phone, complete with stamps, memes, and emoji.  Add in some Twin Peaks dream talking and puzzles that involve rolling around as a decapitated head and you’ve got a title that is fun, weird, and thought provoking.