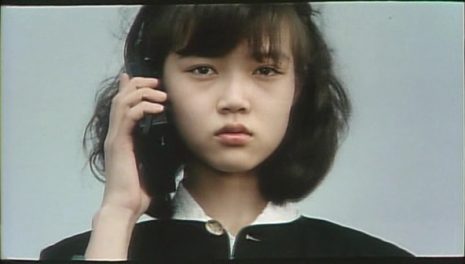 In 1967 yakuza filmmaker Seijun Suzuki was fired from his job at Nikkatsu Company for being too weird.  He made 40 films in 12 years for Nikkatsu, each allocated less than 40 days of production from start to finish.  Steadily his movies got stranger and stranger.  At one point in Tokyo Drifter (1966), the entire set inexplicably turns white.  In Branded to Kill (1967, his last film for Nikkatsu), the contract killer protagonist becomes roommates with his target, who is also trying to kill him.  Although Nikkatsu produced a huge volume of films during the 1950s and 1960s, today Suzuki’s are the only ones that anybody remembers.

In the 1970s Nikkatsu burned through the yakuza film crop and switched to pinku eiga soft porn.  This effort saved the company, and by the 1980s they were willing to fund just about any film as long as it met its nudity quota.  Junior filmmaker Kiyoshi Kurosawa produced two movies for Nikkatsu in the early 1980s, including The Excitement of Do-Re-Mi-Fa Girl (1985), which he wrote, directed, and edited.  Nikkatsu probably expected Do-Re-Mi-Fa Girl to be a sexy movie about a naive girl who learns about sex from free-spirited college students, but what they got instead was a weird art film about shame and personal boundaries.  Like Kurosawa’s later films, The Excitement of Do-Re-Mi-Fa Girl has a dream-like quality to it, and it’s never clear if the events on the screen are to be taken literally or as a metaphor for something else.[1]  Nikkatsu fired Kurosawa, who eventually bought the film back and released it himself.  Twelve years later, Kurosawa appeared seemingly out of nowhere with Cure (1997), the first in a series of weird and very scary films that established him as one of Japan’s most interesting contemporary directors.

Suzuki and Kurosawa were working on pulp films that came with a lot of restrictions, both in terms of genre expectations and production logistics.  Yet both directors tried to do something interesting within their form.  They met the guidelines of their genres but found ways to subvert the content of their work.  Perhaps the constraints themselves helped them produce films that are startling and creative.  It’s clear that Suzuki and Kurosawa used their pulp genres as a cover for their more complex ideas.

I can’t help but wonder if the same is true for the Muv-Luv series.  The visual novel series consists of three games (Muv-Luv Extra, Unlimited, and Alternative), which must be played in progression to be understood.  Like all visual novels these games are nearly all dialog between the protagonist and other characters in the story, which are depicted as flat images against a background.  As with many visual novels, the initial setup to Muv-Luv involves a male protagonist surrounded by women, each of whom is a potential conquest.  But like Kurosawa and Suzuki, Koki Yoshimune, the author of the Muv-Luv series, seems to have more complicated ambitions for his pulp. 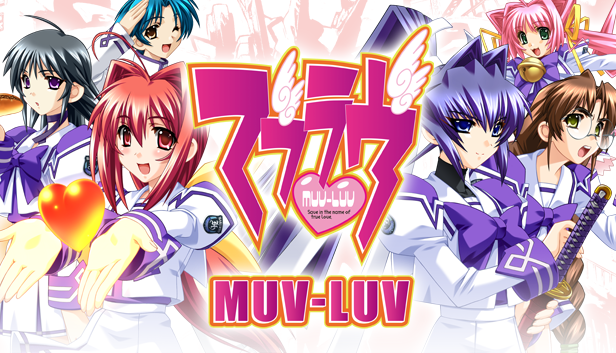 Pretty much what you’d expect, right?

I have to admit that I was a little uncomfortable with the first Muv-Luv game (now titled Muv-Luv Extra, a variant of the original adults-only release that has had its explicit bits removed for international and console releases).  It’s well-written and funny, but it plays exactly to the dating game visual novel form.  Every choice in the game is a proxy for selecting a woman from the cast that fits your personal preferences.  Every member of the cast (which is entirely women) seems to be there primarily to give you a wide range of sexual conquest options.  And to make this narrative work, the characters all have to be secretly in love with the protagonist.  It’s a transparent, and frankly pretty boring, male power fantasy.  “Maybe you shouldn’t play this one in public,” my wife advised me after looking over my shoulder at my Vita. 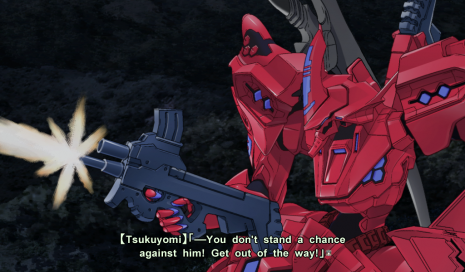 The moment Muv-Luv Unlimited booted up, I knew my initial time investment had been worth it.  In Unlimited, Takeru Shirogane, the protagonist of Extra, wakes to find himself in an alternate dimension where humanity is fighting for survival (with big mechs) against alien hoards.  His high school is a military base, his classmates are cadets, and he’s the only one of them that didn’t grow up learning how to be a solider.  The male power fantasy is immediately turned on its head: instead of being the object of desire of every woman within a 5 mile radius, Takeru is the loser of the group.  He can’t keep up with the other girls in his squad.  They can out run him, out shoot him, out-everything him.  In fact, they think he’s dead weight that is holding them back from graduating into full-fledges soldiers.  Most of Unlimited is Takeru getting his butt realigned by a cadre of capable women who are tired of his bullshit.  Every once in a while the game will remember its roots as a fan service dating game and put one of the female characters in some compromising position, or force them all to wear revealing battle suits.  But most of the time it can’t be bothered: Yoshimune is too busy world-building with mechs and aliens and complex ethical questions to spend time on cheesecake.

By the time Muv-Luv Alternative rolls around, any hint of the series’ dating game roots has been thrown entirely out the window.  If Unlimited is about cutting Takeru down to size physically, Alternative is a litigation of his failures as a human being.  It is unmitigated misery, mostly of his own making.  The number of choices available to the player also fades away, and the game becomes an almost entirely linear story.  Alternative forces Takeru to deal with his own privilege as somebody from a world where he was safe enough to be a carefree idiot.  It forces him to untangle sticky ethics dilemmas, find a personal reason to fight, and cultivate his relationships carefully.  It’s an emotional rollercoaster, a mecha war epic, exceptionally detailed and complex, about the last thing you’d expect from a series that began as a lacrosse team love triangle. 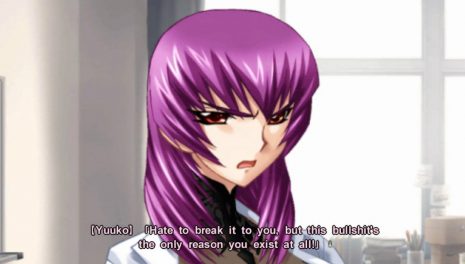 Alternative is where Yoshimune’s design really starts to shine.  It takes a long time (I’m guessing that I clocked somewhere in the neighborhood of 50 hours between all three games), but eventually he has eased you into an insane world that is populated by characters that you know exceptionally well.  He uses the tropes of the dating game genre to establish detailed characters (because, like horror, an emotionally-relevant dating game needs characters that you actually care for), then puts those characters into an extreme situation to see how they respond.  The protagonist is forced to grow up, and the player might be asked to do a little maturing of their own along the way.

Like Suzuki and Kurosawa it is clear that Yoshimune is using the visual novel dating format as a stealth transmission system for a much more complex topic.  I might even go as far as to say that it’s something of a slap in the face to fans of the types of games that Muv-Luv Extra is modeled after, an idea which Yoshimune seems to corroborate.  The Muv-Luv series isn’t perfect (and it’s a shame that it’s been saddled with such a terrible name), but it’s worth playing to see how visual novels can support works that are much more complex than the genre is known for.

[1] For the record, my money is on Do-Re-Mi-Fa Girl being about university as a transitional period, where young adults are free to experiment with their identities and personal boundaries before eventually being assimilated (as the movie depicts, by force) into adult society after graduation.  A sort of Japanese Rumspringa.