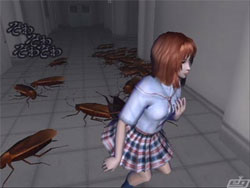 Thanks to Kotaku for pointing me to a preview of Tairyou Jigoku (lit. “The Overwhelming Hell”), a game apparently about making a school girl run away from giant insects. As you might have guessed, this title is by D3, publisher of ultra-budget titles like THE Zombie VS Ambulance.

Now, normally I would just sort of laugh and continue the daily trek I make through the underbelly of video game news sites, but this entry caught my eye. As you might have read, I started this site to learn about games that are designed to provoke an emotional response in the player. Though it may be trite, this title is clearly designed to make the player feel as uncomfortable as possible, and for that reason only it looks sort of interesting. At its best, it might succeed in making some skin crawl. At its worst, it may be that the bugs involved are simply another iteration of Generic Antagonist X (that certainly seemed to be the case with the somewhat similar Necro Nesia). I guess we’ll have to wait and see; D3 certainly does not have a reputation for making fun games.