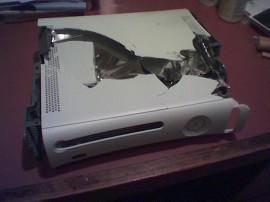 At least for horror gamers, 2006 was pretty much the worst year in a decade. Excepting games with horror themes but no intent to scare (like Dead Rising), only two games classifiable as horror were released. One of them, Siren 2, was restricted to Europe and Japan. The other, Rule of Rose, got awful reviews.

Nightmare Creatures and Enemy Zero were all that was available. But both 1997 and 2001 saw the release of five games, and while none of them were all that great, horror gamers at least had some selection to tide them over. In 2006, we got one game (or two, if you live in Europe), a catalog more paltry than any other year since 1994.

What have we done to deserve this? In 2005, 15 games were released with us horror gamers as the target audience. On top of that, some of those games really good (like Resident Evil 4). How can the well have dried up so fast?

The answer? “Next Gen.” Those two small words spelled doom not only for horror games, but for all kinds of niche genres. Developers were hunkered down with their new development kits, spending millions on the creation of new titles for the Xbox360, PS3, and Wii. It was time for them to spend more than they have ever spent before on development (as next gen development is much more costly than current gen), but also a time for developers to assume much more risk than usual. The launch of any new console, not to mention consoles retailing at exorbitant prices, can be hard for developers, as the installed base does not yet exist and

Next gen complaints are frequent on this site, so I’ll spare you that particular rant. Suffice to say that in the grand scheme of things, horror games are small potatoes. With the exception of the Resident Evil series, most horror games don’t move enough units to really warrant interest from the publishers. I mean, compared to main stream blockbusters, Resident Evil 4 was a pretty successful game. But the sales of Silent Hill 2, 3, and 4 combined can’t match it. Games like the Fatal Frame series are way behind that. And Rule of Rose? It has sold so badly that it barely even shows up in my graph.

In the context of the video game market as a whole, survival horror is barely a blip on the radar. Horror games are released when niche genres can still do well. That is to say, they are an indicator that risk (and cost) is low. The absolute absence of horror games in 2006 indicates that they are just too risky for publishers to pursue at the moment, especially as the next generation consoles have yet to fall into an obvious ranking. That’s not to say that the genre is dead, just that it’s too small to rate with most publishers. When every release must be a mega-hit to make money, genres like this aren’t even worthy of consideration. But when the market sways back into balance (as it will when the next gen consoles begin to reach a larger and larger audience), we’ll see them return. And the big guns, the Capcoms and Konamis, sell well enough that they can assume the risk presented by next gen.

But we may have to wait a little while until the little guys, the games with new ideas and crazy new game mechanics, are able to return to the market place.