If you liked the first Fatal Frame, you’ll enjoy Fatal Frame 2. The mechanics are almost identical, the strategy remains unchanged, and the most annoying ghosts have been fixed. And everything is bigger and better in Fatal Frame 2: the game takes place in an entire village rather than a single house, the story is complicated and disturbing, and the cool rendering effects are even better than before.

If you never played the original Fatal Frame, the game works as follows. Your character is stuck in some very scary place with a very bad history. There are ghosts haunting the area, and they are pissed off about being dead. They can attack you, but you have a way to defend yourself: an antique camera. When you use the camera the game switches from third-person mode to first-person mode, so targeting is pretty easy. Taking a picture of a ghost will hurt it, but you can do a lot more damage if you time your shot correctly. Just before a ghost attacks you, there is a small window of opportunity to take a “fatal frame” shot, which will deal heavy damage to the ghost and win you a lot of points. You can use points to power up your camera and do even more damage. The games take place in extraordinarily Japanese locals, which makes the ghost angle work even better (seeing a woman crawl out of a kimono box is some pretty scary stuff). The atmosphere generated by the Fatal Frame series is some of the best in the genre, and the horror component is quite well done.

In Fatal Frame 2, twin sisters Mio and Mayu get trapped in a mysterious village named All God’s Village. The village was apparently abandoned a long time ago, because there is nobody around and everything is dilapidated. But when Mayu disappears, Mio must save her by uncovering the secret (and horrific) past of the village, armed only with her mini skirt and antique camera. Over the course of the game, Mio will visit many different houses and explore the areas surrounding the village, making the game much larger than the original Fatal Frame.

The thing that Fatal Frame 2 does better than any other game is scene composition. The atmosphere is excellent, and the Japanese themes make it even more disturbing. The camera placement in Fatal Frame 2 is top notch, easily the best of any game in the genre. Fatal Frame 2 is technically a “fixed camera” game, meaning the camera doesn’t adjust its position based on the direction that the character is facing, but Tecmo (the developer) has gone out of their way to use their 3D engine to make intriguing shots. Many of the cameras move with the player, and often they will twist and use odd perspectives to increase the uneasiness that the player experiences. Fatal Frame 2 also makes excellent use of alternate rendering methods, such as high-contrast black and white rendering, and super-heavy-film-noise rendering. Mix in a very well modeled character and some excellent ghost effects, and you have one of the best visual designs in a game ever.

The camera functionality has been improved over the first Fatal Frame as well. The Fatal Frame 2 camera itself hasn’t changed much, except that the HUD is more informative and there is a slight delay between the motion of the lens and the motion of the world, which gives the player a lot better feeling of movement. New to Fatal Frame 2 is the ability to add and equip special items that add permanent functions to the camera. While some of these are cool (like the one that shows you how much life a ghost has left), some of the others seem useless. You can also power up your camera by “purchasing” special lenses with Spirit Orbs (an item found throughout the game) and points. These special lenses take spirit points (accumulated when you do shots worth a lot of points), but they give you special abilities that can help combat the ghosts. As with the first Fatal Frame, the strategy for fighting ghosts with the camera is to learn their pattern, wait for the fatal frame shot, take it, and then move away.

The ghosts themselves are very similar to the ghosts in the first game, though the designers have thankfully toned down some of the behaviors that made the first game so annoying. Ghosts will no longer circle around you faster than you can move, nor will they vanish and appear behind you. You do get into fights with three or more ghosts sometimes though, which can be tough because you can only keep an eye on one ghost at a time. However, using the camera upgrades can help you quickly put ghosts out of commission. The ghost designs are pretty cool. My favorite is the ghost of a woman who died by falling about three stories down onto her neck; every time she appears there is a horrible scream and you she her body crash into the ground in front of you. Then she crawls toward you upside down using her shoulders, which is particularly creepy.

The controls are pretty good. Fatal Frame 2 follows the Resident Evil mold, but they have also mapped the run button (Square on PS2) to mean “move forward,” so you can hold it down and continue moving forward even if the camera changes angles dramatically. However, I found myself automatically turning around each time I went through a door, probably because I have trained myself to automatically compensate for new camera angles.

The plot in Fatal Frame 2 is similar to the first game, and while interesting is somewhat under-developed. You’ll find plenty of manuscripts describing the plot throughout the game, but there’s never really any point to the plot other than to describe what happened to the village. Your goal is always to rescue your sister, so the back story of the village is somewhat secondary. There are three possible endings, but you can’t get the “real” ending unless you beat the game on Hard mode (which is only unlocked once you beat it on Normal mode). They did this in Fatal Frame 1 as well, and it bothers me. The Normal Mode ending is commendable because Tecmo has chosen to try something new with the story, rather than reverting to the Hollywood cliche trap of solving all problems and killing all bad people by the end. But the Normal Mode ending is also very sad, and is a bit of a downer after all the energy required to beat the last boss. I don’t have time to play the game again and get the “best” ending, which is too bad because it sounds much better.

When I wrote about the first Fatal Frame, I noted that it was “sufficiently” scary. That probably applies to the sequel as well: the atmosphere is very well done and the game has some really good scares in it, but above and beyond the scary locations and scary ghosts, there’s not a whole lot going on. Fatal Frame 2 avoids pop-out-of-the-dark scares, and the environment is done well enough that opening doors can cause you to catch your breath. But if you get over the ghosts and the creepy locals, there isn’t a lot of scary content left over. Though the protagonist is quite vulnerable-looking (which is usually an easy way to make a game scary), the game itself isn’t very hard, so you never really feel like she is in danger.

Speaking of difficulty, Fatal Frame 2 is pretty easy. Though the camera can be powered up, doing so isn’t really necessary until the very end of the game. I actually finished the game having never used any of the special camera power-ups or powerful film until I got to the end boss. The puzzles are pretty simple as well, and like the original Fatal Frame, they either take the form of navigation puzzles or of move-icons-around puzzles. I finished the game in 9 hours (Rank E! damn!), but I suspect that a dedicated gamer who wasn’t interested in exploring much could finish much quicker. Really the only place where the difficulty level changes dramatically is the end boss, and that’s only because the end boss doesn’t follow the regular rules of the game (I wrote about this in a news post).

Overall, Fatal Frame 2 is an example of excellent execution of a so-so concept. The atmosphere is great, the graphics are great, the controls are great, and the visual style rocks. The story is ok and the scares all follow the same format, but these are not really failures of design, just aspects of the game that are a little simplistic. The series remains rather unique in the genre for both its combat system and its choice of enemies, and I recommend anybody who loves horror games check it out. 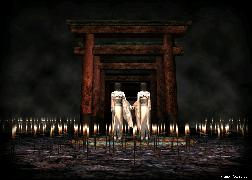 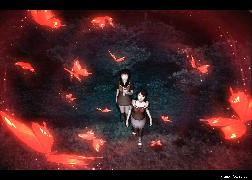 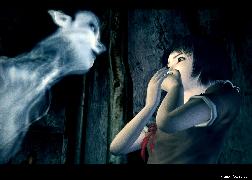 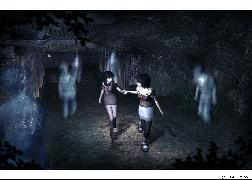 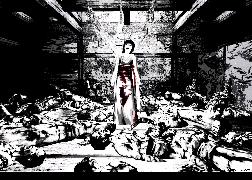 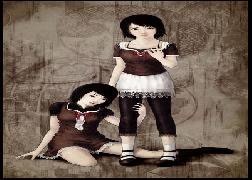