Translated by IGN as “Kyoufu Shimbun (Heisei Version): Mystery! Spirit File.” This game sounds like a blend of Kamaitachi No Yoru and Fatal Frame.

The game is based on a manga series about a mysterious newspaper that reports on deaths and calamities that will occur in the future. Unfortunately, reading the newspaper also shortens one’s life to 100 days. The game was created based on input from the original mangas author.

The game has two modes: a text-based conversation mode and a third-person exploration mode. Interestingly, the second controller is used as some sort of enemy radar: you place the controller on a special sheet and apparently it warns you (presumably by vibrating) when enemies are near. The game apparently works this feature in by claiming that the controller is possessed by protective spirits.

It is very difficult to find screenshots for this game… Konamis site only contains very small thumbnails. If you come across a good source for images of this game, please let me know! 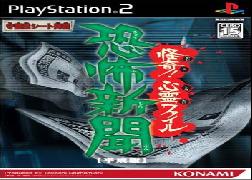