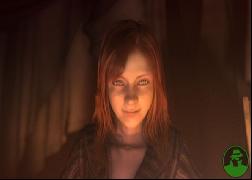 Nice art, but where’s the game?

I tried to play Rule of Rose again today after almost a year hiatus. I don’t know exactly how to put this, as I know a lot of horror fans enjoyed this game, but I think that it’s terrible. There are so many problems with it I don’t even know where to begin. The game mechanics are simultaneously trite and poorly implemented; though you spend most of the game running around and investigating, the areas you visit are very similar (boring) and the running mechanics themselves are flawed. Combat is a joke; getting accosted by even the most under-evolved enemy peon is likely to result in your death because the melee mechanics are absolutely terrible, and each enemy hit does about three times more damage than any single health item can restore. The game design seems to be thus: find an item, give it to the dog so that he can use it to find the next item, repeat until you find everything or get really angry and turn the machine off. Finally, the promising premise of adolescent girl cruelty taken to the extreme seems to be wasted on meaningless dialog and repetitive missions.

The only thing that Rule of Rose seems to have going for it is its style. The game looks pretty phenomenal, especially the cut scenes (though the game is dark enough that I had to adjust my TV to maximum brightness). The style of 1930’s Victorian England works pretty well, and it’s backed up by some great art and music. The style is also cohesive across the whole game, from the user interface in the pause menu to the locales.

And maybe, for some people, style is enough. I touched on this idea in my review of Kuon, another game that has plenty of nice art and terrible game play. I suspect the people who are enjoying Rule of Rose like the style and the art and the premise enough to give the game play aspects a pass.

However, I’m not one of those people. I faulted the Silent Hill movie for being too much style and not enough substance, and I’m going to go ahead and fault Rule of Rose for the same offense. I should note that I’ve not finished the game yet, so my impression may yet change (it’s certainly happened before), but at the moment I’d much rather watch Rule of Rose the movie than try to drudge my way through Rule of Rose the game.

6 thoughts on “Rule of Rose Impressions”