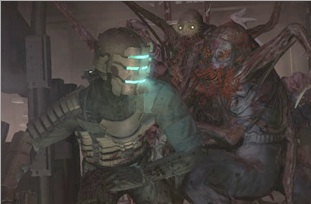 A bunch of horror games have been announced this year, so I thought I’d take a step back and see what we can look forward to in the near future. I think this list is pretty complete, but please post information about upcoming games that I miss. Also, until the titles actually ship it will be pretty hard to tell if these games are really horror games or just some other genre in gothic trappings. With that, here’s what’s on the horizon:

It is interesting to note that all of these games except for Resident Evil 5 are being developed by Western developers. Japanese developers haven’t announced any horror games lately, which might have something to do with the absolute dominance of the Nintendo DS and Wii in Japan (those platforms are dominating here as well). I know for sure that there is another as-yet-unannounced popular Japanese horror franchise headed to the Wii (again, via an American developer). On the other hand, it seems like the Wii is particularly suited to horror gaming, as the Wiimote would make a perfect flashlight and Resident Evil 4 for the Wii kicks ass. I’m hoping that we hear about some new games for those platforms early next year.

8 thoughts on “Crawling Up Through the Topsoil Sometime Soon”