Based on the movie of the same name, Halloween is a very early survival horror game. Players must run through a large (and apparently unfurnished) house rescuing children from the evil knife-wielding Michael Myers. Collected children follow the main character, and they must be deposited at one end of the house for points. Certain rooms have lights that flicker on and off, making them more dangerous to pass through.

Halloween may be the first horror game to feature beheadings and child murders, complete with a few pixels sprinkled in for blood. It may also be the first horror game (though unfortunately not the last) to use annoying music whenever the enemy appears. Actually, the music is quite well done, especially in the “title screen” (in quotes because there is no title ever displayed). However, the in-game music consists of a single bar from the main theme looping endlessly as long as Myers is near.

Interestingly enough, Halloween feels a lot like the original Clock Tower, though it is much more primitive.

Check out tons of information on this game at AtariAge: http://www.atariage.com/software_page.html?SoftwareLabelID=229. Notice that nowhere on the official game documents (manual, box, cart label) is Michael Myers’ name mentioned, suggesting that this game may have been developed without access to full rights to the Halloween license. 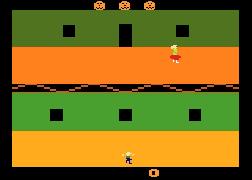 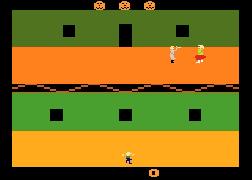 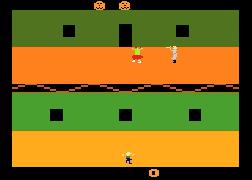 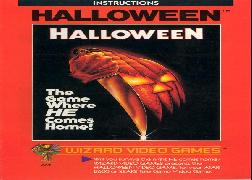