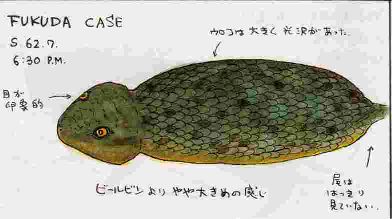 It’s been a while since the last Creature Feature, so I think it’s high time for a new one. This time around the creature in question is the tsuchinoko, a mythical snake from Japan. Unlike previous Creature Feature entries, the tsuchinoko is hardly a monster or supernatural entity; though some versions of the story suggest that they enjoy drinking and are capable of speech (but should not be trusted), most accounts paint the tsuchinoko as just an extremely rare species of snake.

Tsuchinoko are said to have short, wide bodies and triangular faces. They are sometimes described as being able to jump long distances or form a rolling wheel by biting their tail. Apparently, some people in Japan actually believe that the tsuchinoko exist and have simply managed to elude scientific categorization. Several cities in Japan have offered rewards for the capture of a live tsuchinoko (up to $200,000), but so far the creature has not been caught. The Phantom Tsuchinoko is a pretty comprehensive page (in Japanese) about the creature.

For whatever reason, tsuchinoko show up in a lot of video games, often as secret items. There’s actually a whole section in Siren about the tsuchinoko. For some reason this creature continues to interest many Japanese, perhaps because it’s difficult to be sure if it is an actual species or simply legend.

One thought on “Creature Feature: Tsuchinoko”