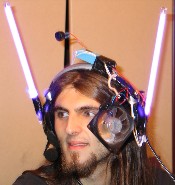 A while back I posted a short and completely off-topic piece about wireless headphones. Basically, good wireless headphones are not cheap, and though there are pretty good alternatives, some of them (like the Sony IR headphones I ended up buying) get interference from plasma TVs (hooray!). Despite the color-induced static, I toughed it out with my IR ‘phones for several months; though many of you suggested that I just get a nice long cable and forget about the whole wireless business, my TV’s lack of headphone port kept that option out of reach. I played through all of Bioshock with the IR headphones, I watched several movies with them, and I used them to improve my Rock Band singing. I was hoping that I’d just get used to the wavering layer of static that my TV caused, but I didn’t. The wireless headphones weren’t totally useless, but I was pretty disappointed with them.

Then yesterday I happened across a Sharper Image store. If you’re not familiar with Sharper Image, it’s a store that sells random gadgets and techie thigamagigs that you didn’t know you needed for exorbitant prices. As the name suggests, Sharper Image is all about techie fashion; it’s a place for people who want a gadget that looks cool go to be relieved of their cash. Actually, I have often enjoyed browsing the random contraptions for sale at Sharper Image, but I’ve never actually considered purchasing anything there.

Anyway, Sharper Image is exactly the kind of place that people stop going when the economy is bad, and so they ran out of money a couple of months ago. Yesterday while tooling around Burlingame looking at expensive baby stores, I noticed that the local Sharper Image was having a going-out-of-business sale. I looked around inside but was unimpressed; I don’t need a $500 pair of nightvision goggles, or a memory card that fits in your phone, or a set of spoons with digital displays in the handles, or any of the other crap they had for sale. Just as I was walking out, however, I noticed that they had wireless headphones! Upon further inspection it turned out that the ‘phones were Blue Tooth, came with a transmitter (which is a non-trivial addition), and were going for about $80, marked down from $199. And to top it all off, these headphones had big, wrap-around ear pads, the kind that I like.

So I bought them. I don’t need two pairs of wireless headphones, but on the other hand the Sony IRs should work better away from the TV, so maybe I can find a use for them. I hooked up the Blue Tooth headphones and am extremely happy to report that they sound phenomenal (at least, compared to the IRs). There’s no static, the sound is crisp and clear, and unlike the infrared headphones they don’t require line-of-sight to work. Ok, so the volume controls are pretty unresponsive and I couldn’t get the damn things to pair with my computer, but who cares: these headphones are exactly what I was looking for. My quest for wireless headphones has, for the moment anyway, come to an end.

Which means, just so you know, that I can get back to playing horror games on a more regular basis. I’m most of the way through Hellnight and I’ve put some serious time into Siren 2. I’ve been temporarily distracted by the hilarious (and very fun) No More Heros, but I’m closing in on the end of that game pretty quickly. Thanks to new (non-sucky) wireless headphones, I hope to retire and review another game or two in the next month.

2 thoughts on “My Quest to Find Affordable Wireless Headphones, Part 2: The Cerulean Molar”