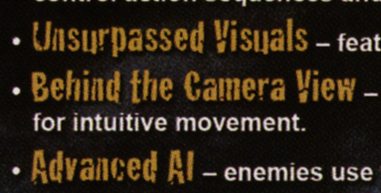 In the last post I talked about how game reviewers often approach their reviews of games as if the games are consumer products. They evaluate each feature in isolation from the others, and at the end assign a score based on some attempt to objectively determine the “quality” of the game. This is in stark contrast to reviews of other media, such as books and film and music, which are reviewed based on the reviewer’s subjective opinion of the work.

Actually, it’s not just reviewers that assume this attitude. Just look at the back of the box of any game: the game is invariably described in terms of the features that it contains. Consider the “Product Features” section from Amazon.com’s page on Resident Evil 4 for the Wii:

Now, in addition to being pretty poor English, this list of “features” fails really dramatically to effectively describe Resident Evil 4. They are similar to the back of the box (though the box at least contains a few plot details). Now compare that list of features with the product descriptions of the first Resident Evil film (a synopsis of the plot is given), the Resident Evil soundtrack CD (samples can be listened to), and even this Resident Evil book (the first page can be read). All of these other forms of entertainment give some sort of information about the content of the work, not just a sterile description of “features.” The game page is much more similar to the page for the Resident Evil 4 Chainsaw Controller, which is a consumer product and, as such, contains a list of product features.

So the games-as-products mindset doesn’t begin and end with reviewers. Games are advertised this way, and marketing makes a big deal out of the special features that each game contains (consider the common tactic of releasing a “game play video” to show off some unique mechanic; Alone in the Dark 5 is a recent example). Reviewers are not solely to blame for this product-oriented approach (and actually, I think that many reviewers try very hard to give readers good information without realizing that their style of writing is vasty different than other forms of media).

The real question is, why does this discrepancy exist? Why are games treated differently than other types of products? Maybe it has to do with the persistent association with toys. The Nintendo Entertainment System’s primary competitor in 1985 was Teddy Ruxpin, and to this day many people consider video games a branch of children’s toys rather than a medium (which is also the cause of a lot of controversy surrounding video game violence, I think). Or it might have something to do with video games being interactive: perhaps by enumerating features that are related to how the game is played, marketing is attempting to show how playing this game will be better than playing anything that you’ve ever played before (which, if you think about it, makes game reviewer’s tendency to compare games to other titles make more sense). Or maybe it is because games are sold with PCs and game consoles (which are certainly consumer products), and the product-ness of these host platforms “rubs off” on the media as a whole.

Those aren’t bad explanations, and they probably are at least partially true, but I think that there’s a more important reason that trumps them all: the price point. Games cost too much, both to develop and for the consumer. High development costs push the street price up, and the street price is extremely high compared to other media. Here in California, it costs $10 to go to a movie in a theater. Renting a movie is around $3.00. Buying a DVD is usually around $15. A new novel costs between $8 and $30 (hardbacks are more expensive, but paperbacks are always available eventually). CDs cost $15, and though that form of media is on the way out, it is being replaced by digital distribution models like iTunes that work out to just slightly less. But a new game for your Xbox360

Now, some might make an argument here about the length of a given game vs a movie or book. But I think that “length” is just another technical detail, not a real metric of quality. If you read the reviews of The Orange Box, you might have noticed reviewer after reviewer harping on the amazing “value” that the set provides (several high-quality games for the price of one). But no reviewer rewards a long book for having “value” because it takes you longer to read it; in fact, excessive length is often considered a negative when books and films are reviewed. And other media isn’t priced based on its length; Neal Stephenson’s excellent Cryptonomicon only costs $8.99 despite its lengthy 1168 pages. His interesting In the Beginning… There Was the Command Line is a thin volume (160 pages), and it still costs about the same. No, the “duration of entertainment” isn’t a factor in pricing other types of media, and I don’t see why it should be for games either (and, as an aside, 100-hour RPGs don’t cost more than 5 hour adventure games, so even within the game market length doesn’t seem to be a factor).

The problem with expensive games is that a lot of games are actually pretty bad, and the consumer can’t tell which are good and which are bad by looking at the box. When I did research for my article on sales vs game scores, I found that, across all PS2 games, the majority of titles got a rating lower than 80%. About 20% of all PS2 games got “good” reviews and the rest got mediocre to poor. That’s in keeping with Sturgeon’s Law, which stipulates that most things are really crap, which I think applies to movies and books as well. The difference, of course, is that for $8 – $20, the amount of risk that the consumer assumes when buying a book or movie that they know nothing about is very small. $50 – $60 is a much larger investment, and therefore the consumer is likely to be much more careful about what he buys.

My theory is that the high price point of games moves them out of the “disposable media” category and into the “product investment” category in the consumer’s mind. In that context, the consumer needs to know if his purchase is really going to be worth the money. And as I mentioned in the last post, things like plot are subjective and are not guaranteed to be liked by everyone, so marketing, reviewers, and in turn, consumers, fall back on objective facts about the game in an attempt to define where that $59.99 is going. You can see this mindset everywhere in the game industry if you look for it; consider, for example, the customers who got angry that Halo 3 only supports “640p”, as if 80 pixels of screen real estate have any tangible effect on the quality of the game. You can see this mentality in the way that games and game hardware is marketed: the PS3 had better be able to make games that we’ve never seen before; otherwise what’s the point of spending all that money for it? And I think that endless flame wars amongst fanboys usually boil down to insecurity about a purchasing decision; once a fan has made up his mind to drop his cash on a specific game or system, it’s common to really want to believe that the decision was correct and the money not wasted.

The price point for games, and, to a lesser extent, game systems, changes the tone and context within which games are perceived in the market. If all games cost $15 new, I don’t think we’d have very many discussions about quality in terms of feature sets; at a lower price, the risk of failure is lower and people will be more willing to try new things, and I think the conversation would shift to being about the content rather than being about the technology. Alas, until games can reach a much larger market, or until they can break out of the never-ending technical arms race, there’s not much hope that the street price of video games will fall any time soon. You can see, though, that some companies are trying; Nintendo’s strategy of cheaper hardware, cheaper games, and a wider target audience is definitely designed with these goals in mind. The jury is still out on whether or not they’ll actually be able to make a long-term difference, though some people think that the evidence is already clear.