Darkwatch is a first-person shooter developed by High Moon Studios and published by Capcom. During the development of Darkwatch, High Moon transitioned from being a subsidiary of Sammy to an independent studio, and I think that it is rather amazing that the transition didn’t doom this game. The game that shipped is not perfect, but the developers got a lot of things right.

Darkwatch is best described as Old West Horror. You play as Jericho Cross, an outlaw who picks the wrong train to hijack and ends up turning into a vampire. You must join a secret underground organization, the Darkwatch, to destroy the evil you have unwittingly unleashed and try to become human again. The game is filled with old west towns, trains getting hijacked, horseback riding, and gunfights in the desert. The thing is, your enemies are always supernatural: skeletons with hatchets, floating banshees, etc. It’s an odd mix of Western themes and horror elements, but for the most part it works. Though the story is pretty trite and predictable, I have to give High Moon props for picking a setting that is all but nonexistent in games.

Darkwatch definitely comes from the Halo school of FPS design. Some of its mechanics are so similar to Halo that you might even call it a knock-off. For example, you have a shield that automatically regenerates when you are not taking damage; in the middle of the game, you’ll be asked to drive around on a physics-controlled dune buggy thing that drives exactly like the Halo Warthog; you can only hold two weapons at once, and picking up a weapon causes you to drop your current one on the ground; weapons include a crossbow, which sticks into enemies and then explodes, just like the Halo splinter gun; all of the guns can be used as clubs for close-range melee attacks. It’s very clear that the designers of Darkwatch really liked Halo, but since the context of the game is so different, the places that were obviously copied didn’t really bother me. Actually, they’ve done a good enough job of copying Halo that the mechanics remain pretty fun within Darkwatch. As with most console FPS games, you control with both analog sticks and use the triggers to shoot. Darkwatch doesn’t seem to do a lot of lock-on assistance for you, but I found the controls smooth and intuitive.

The best thing I can say about Darkwatch is that it has really nice art and sound. The levels and enemies all look fantastic, and the animations are really well done. Though most of the game takes place at night, the environments are lit well and diverse, and the art is stylized without looking cartoony. Some of the cutscenes are also extremely well composed. Though the game is not scary at all, the environments set the tone very well: there are a lot of really nice moonlit scenes in the game, complete with shafts of light and wisps of smoke. The sound design is pretty good too: as you move you can hear the subtle clinking of your spurs as well as the gurgling and groaning of approaching enemies.

So we have all the right elements here: great art, good sound, and well-implemented (if somewhat unoriginal) controls and mechanics. Unfortunately, Darkwatch falls short of being a really fun game and ends up alternating between boring and frustrating. One of the main problems, I think, is that enemies can attack you from any side. As with all FPS games, you have almost zero spatial awareness: you can see what is right in front of you but nothing on the periphery. In this game you will die many, many times for no apparent reason… you’ll just be running along in the middle of a fire fight with close to full health and a full shield and then BAM! you’ll be dead. Chances are that an exploding enemy ran up behind you, or that the stick of dynamite you threw bounced off of something close and blew you up. You won’t have any idea, though, because you were not able to see your attacker. It’s extremely frustrating to get into a good rhythm in the middle of a fire fight and then suddenly die for no obvious reason, and it happens all the time in Darkwatch.

Another annoying thing about the combat is the way that the game heavily promotes head shots. There is a pretty cool feature where you can blow off an enemies limbs, but it is ultimately annoying because some enemies take 10 times more ammo to kill if you can’t quite target their head. The primary example of this is the banshee, an extremely annoying enemy that appears in pretty much every level of this game. This enemy shoots bolts out of her head that will stop bullets, so shooting her in the face is pretty hard. Sometimes she’ll swing in close and let you get an easy head shot, but otherwise you’re stuck trying to shoot her in other places. Even worse, this enemy can fly, so dynamite isn’t effective and you have to constantly move your view up into the air to target her, which means you can’t see where you are going.

This brings me to my last frustration about combat: since you have zero spatial awareness, it is trivially easy for enemies to sneak up on you. You’ll be pointing your view in the direction of one bad guy and then suddenly begin taking hits from a guy who somehow has shown up right next to you. This problem is aggravated by the fact that enemies warp in, and there may be warp points that are not within your field of view. A radar would have fixed this problem.

So the combat can be frustrating, especially towards the end of the game. There is a section towards the end of the game that took me something like 30 tries to complete, which is sort of ridiculous. This section was far more difficult than the end bosses because it occurs in an area where guys can be attacking you from any direction. You can’t stand your ground or you’ll be hit by seeking projectiles, but you can’t move backwards or to the sides reliably because you’re likely to hit a wall or another enemy who is trying to chop you. Charging enemies doesn’t work, because in this section the main enemy type as a devastating close-range melee attack. This section was like an example of all the problems with combat in this game, and I was exasperated by the end of it.

However, even with all the annoyances, combat can still be pretty fun in Darkwatch. The second major problem I had with the game was that after a while, it’s pretty boring. I think this is the fault of the level an enemy design: the levels are amazingly linear, and they follow a predictable pattern. You’ll enter an area and a bunch of guys will spawn. You’ll shoot them all, then go to the next area and repeat. There’s very little diversity in the types of challenge presented (as opposed to games like Half-Life, where the challenge changes dramatically with every section), and after a while it all feels the same. A related problem is that there isn’t much diversity in the enemy designs. Enemies come in three flavors: guys who run up to you and try to hack you, guys who move around at a distance and shoot at you, and sniper guys who don’t move much and shoot at you. There are a number of enemy types (skeletons, banshees, undead cowboys, snipers, undead indians, skeletons carrying TNT, big fat guys with shotguns, bigger fat guys with knives, and teleporting lizard men), but most of the levels use the same types over and over. You’ll kill craploads of skeletons, banshees, and snipers throughout the game, but you’ll barely see any undead cowboys. The lack of diversity (excepting a few levels that take place during the day) really eats into the fun factor of this game, because every level is the same except for the background level art.

Given these problems, I can’t decide if Darkwatch is too short or too long. As games go, it’s pretty short; I was able to complete it in about 5 hours, even though I continued a couple hundred times. On the other hand, the mechanics probably cannot sustain a longer game… it felt a little overlong as it is. So I guess the duration is about right, but the pacing of the game is all wrong. There are no bosses until the end of the game, the story itself is pretty boring and predictable, and the game mechanics really don’t give you a reason to continue playing. I wish I could say that I was “hooked” on this game, but actually I got bored of it pretty quickly and just plowed on through so I could say I finished it.

Darkwatch is not a terrible game. It has great graphics, a cool art style, and a really unique theme. The controls are smooth and responsive, and the rules of the game make a lot of sense. But the game content itself is lacking, and even though the technical execution is spot on, I didn’t find it very fun. If you are ready for some old west action or really like first person shooters, you’ll probably enjoy Darkwatch. If you’re interested in horror games, Darkwatch may leave you a little bored. 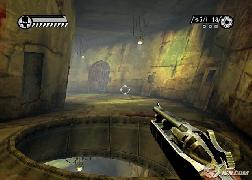 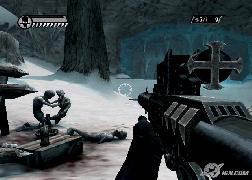 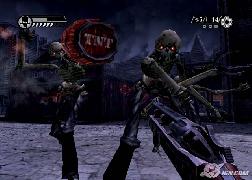 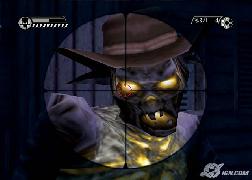 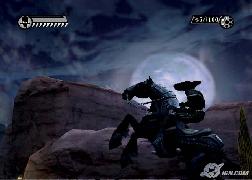