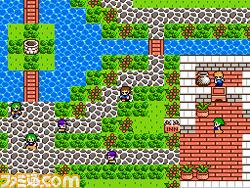 My train ride to work only takes 30 minutes, but it often feels much longer. I ride Denentoshi-sen, a line that runs from Shibuya all the way down into Yokohama, and has the unfortunate distinction of being Japan’s second-most crowded train line. Even a a short ride like mine is exhausting when you spend the trip crushed up against other commuters. But for the last couple of days the trip has gone by so quickly that I almost missed my stop. I’ve been completely engrossed with SquareEnix’s DS horror title, ナナシノゲエム (Nanashi No Geemu, lit. “Nameless Game”).

My first impression of the unnamed game was, I must admit, a little cool. The game at first appears to be Yet Another Visual Novel Adventure: the introduction consists of white text on fuzzy backgrounds and a crush on a girl who is already taken by an upperclassman. In other words, it starts off as just about every other visual novel ever made does. Don’t get me wrong, there are some real classics like Kamaitachi No Yoru within the Visual Novel genre, but most of the games are trite Choose-Your-Own-Awkward-Romance adventures with little or no actual game play. Not to mention that the story involves a cursed video game that kills those who play it in seven days; though this sort of premise pre-dates The Ring, it’s so often used in Japanese horror that it’s pretty worn out. So I was a bit disappointed to see the game open with a bunch of text describing a routine story.

But I knew from the trailer than that lurking somewhere in this game was a 3D mode and some sort of NES-era RPG, so I decided to stick around for at least the length of my train ride to work before giving up on Squeenix’s first horror game since Parasite Eve II. The story is that a new kind of game machine called the TS has become extremely popular in Japan. The TS is a combination portable game machine and phone, and its killer feature is that games can be exchanged over the air, and can be played online. There is, however, a rumor about a strange TS game that causes the death of those who play it. Since TS games are exchanged amongst friends over the wireless network, nobody really knows what this cursed game is called or if it even exists, but the rumor persists nonetheless.

For the first five minutes I was sure that Nanashi No Geemu was going to be lame. And then the aforementioned cursed game showed up. What’s so awesome about it is not just that there’s a Dragon Quest-like RPG embedded inside this DS game, it’s that the developers have gone all out in their attention to detail. In my initial post about this game, I noted that the game appears to show corruption errors that are common on tile-based game consoles like the NES. As the screen scrolls around, little bits of junk tiles appear off on the sides, which back in the day indicated some sort of mismatch between tile indexes and the actual contents of VRAM. This is a pretty hard-core detail, and I love it. But the attention to detail doesn’t stop there. The whole presentation, from the moment the game boots up, is expertly done. There’s even a fake DS launch screen (appropriately renamed to say “TS”) from which the nameless game (nameless because the name appears all garbled) is opened. Everything from the difficult-to-read 8×8 pixel Japanese font to the background music has been meticulously recreated for this title. If I saw just the RPG running without any context, I would easily believe it to be a title from the mid 1980s.

What’s so fantastic to me about this is that the developers are using a game-within-a-game to generate a plausible world within which horrific events can occur. Dragon Quest is possibly the most well-known game franchise ever in Japan; I’d wager that the vast majority of Japanese people between the ages of 15 and 30 have played at least one DraQue game. So what SquareEnix is doing here is tapping into a familiar, believable, even nostalgic memory shared by most gamers in Japan, and using that to legitimize the otherwise unbelievable otherworldly events that occur in the game. The game and its surrounding context is the axis by which they are able to help the player suspend their disbelief. The story is about a person playing a corrupted game on a handheld gaming device, and it is presented by giving you a corrupted game to play on your actual handheld gaming device. This is, to me, an excellent example of how horror can be developed without graphical prowess, or gore, or even any sort of scary monster. All Nanashi No Geemu provides is a convincing context and a story, and it works really well.

Fortunately, Nanashi No Geemu also uses a 3D first-person exploration mode. The interface is similar to the one created by Cing for Hotel Dusk: Room 215, and while it is pretty good the only reason it works at all is because the story context has been set up by the corrupted NES RPG. The majority of the game play seems to be moving around an area, looking for things and trying to solve minor puzzles. The nameless game interrupts these searches periodically, and playing it either gives you hints about how to progress or causes things in the real world to change. I’ve only put a few hours into the game so far, but it seems like a pretty neat formula.

But by far the most impressive thing about this title is the use of another game to make the story events believable. I’ll post a full review when I am done, but so far I am hooked. My only concern is that playing Nanashi No Geemu may cause me to miss my station and be late to work.

2 thoughts on “Nanashi No Geemu Impressions”