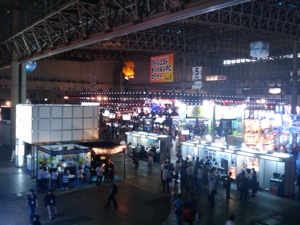 Not too crowded, but the waits are still pretty killer.

Please, my dear readers, accept my apology for a recent lack of updates. While things have been happening on the Survival Horror front, my attention has been diverted to more pressing matters, namely working my ass off and visiting other countries to see my (recently enlarged–congrats Adam and Sarah) family.

Yesterday I attended the Tokyo Game Show 2009. I don’t know why they call it the “Tokyo” Game Show–it’s actually in Chiba, which is a long-ass way from everything. It took me two hours to get there and two hours to get back. I gave a talk about my work (which sadly isn’t horror related, though I was able to work in a shout-out to Mystique: Chapter 2), visited with some friends, and had a tiny amount of time left over to check out the actual show floor. I have never been to a TGS before, but my impression was generally favorable. It’s a smaller show than E3 (and this year it is particularly small, I gather), which means you have a chance of actually seeing everything without wearing holes in the soles of your shoes. The problem with it is that even when there are not many people around (as was the case on the first day, which is open only to developers and press), you have to wait for a long-ass time to actually play, or even get a good look at, games. I waited a total of 1.5 hours in line to play just two games (described below). When the show opens for general admission on Saturday, I am sure the wait times will be counted in hours. Ugh.

I don’t know if this is just me getting old or what, but I have to admit that I was totally uninterested in 99% of the titles on display. This year seems to be YEAR OF THE DEVIL MAY CRY KNOCK-OFF, which is actually YEAR OF THE GOD OF WAR KNOCK-OFF, except that God of War itself is based on Devil May Cry. I mean, sure, there’s a new God of War that was playable, and a new Ninja Gaiden, but there are also a bunch of other similar games like Darksiders that I have absolutely no interest in. I already played a bunch of Devil May Cry and God of War games; just changing the character and the name of the game isn’t enough to interest me in a new one. The only exception seemed to be Bayonetta, which looks slick, fast, stylish, and fantastic, despite being clearly aimed at 16 year old males exclusively. There were also a number of Samurai Warriors/Devil Kings/Too Human knockoffs, but they also looked exceedingly dull. There was a pervasive sameness about many of the games on display; at one point while I was standing in line waiting to play, I realized after 30 minutes that the game to my left and the game to my right were not, in fact, the same game.

I played two horror games: Silent Hill: Shattered Memories and Heavy Rain. Alan Wake wasn’t playable (and I couldn’t find a video reel for it, though apparently one was hiding somewhere), there was no demo for Calling (though I did speak to the president of Hudson for a bit about that game–can’t wait) or many of the other titles I was interested in. Left 4 Dead 2 was being shown but I couldn’t be bothered to wait 40 minutes for it; same deal for the new Metal Gear Solid except replace “40 minutes” with “3 hours.” Basically, there were not a lot of horror games on display this year.

The Silent Hill Shattered Memories build I played was the Wii version. It was clearly an early build; some of the UI was placeholder debug menus, and there were a few glitches with streaming upcoming rooms. But basically the game was playable. I found the setup very cool (it seems like pretty much a new game with a few common plot points with the original Silent Hill) but the camera and control scheme were hard for me to wield. The camera system is a close-in Resident Evil 4-style follow cam, with the Wii remote controlling the character’s flashlight hand and the nunchuck driving him around. As with other games that use this method, I sometimes found myself looking straight up at the ceiling and unable to recenter my view. The demo level had some generic flesh monsters jump out and grab you, and since you can’t fight at this point in the game the only thing to do is run away. If they grab you the remote and nunchuck can be shaken in a specific direction to get them off. Sometimes the game would show you what motion to perform, but other times not; I died several times in the first few minutes because some flesh thing grabbed me and I couldn’t figure out the right movement to shake him off. Combine that with the camera issues and a sort of same-looking blue palette and the result was, I’m sorry to report, a fairly frustrating experience. However, we must remember that a) this is an early build, b) in a real play environment, you would not start on this level with no previous tutorial or training, and c) some cues (like sound) were totally shot due to the loudness of the show floor. So I’m holding out hope that this game will be pretty good. I think that the version I played would have been much better with a few minor fixes, which it’s reasonable to expect the developers to actually perform before the game is released.

Heavy Rain was exactly what I hoped it would be. If you played Indigo Prophesy (or Shenmue 2, for that matter), you have a good idea what to expect. The basic form of those games (which, if you haven’t played, is third-person-adventure-as-a-film) has been improved and polished to a shine. The controls, as usual, are non-standard but correct for the system. It lives somewhere between the full analog control that most 3rd person games provide and the highly-scripted quick timer event approach. It works really well. I played a segment in which a police detective visits a store looking for clues, and happens upon an in-progress robbery. There’s got to be a ton of ways to get through this part, but I mostly screwed them all up. I snuck up on the guy and planned on hitting him with a bottle, but I went for the bottle too quickly and ended up dropping it. Then I had to talk him down, which I also did poorly, and while the situation ended without anybody getting killed, I felt like I wanted to try it again. The characters, acting, and script were all fantastic; I can’t wait to play this game. In fact, other than Metal Gear Solid 4, this is the only PS3 exclusive game that I’ve felt any real excitement for.

And that is pretty much all I got to see in my short time at the show.