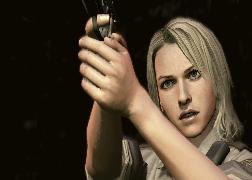 This is part two of a series of articles about Deadly Premonition. You should read Part 1 first.

The August 2010 issue of Game Developer magazine has a lengthy post-mortem review of Deadly Premonition, written by SWERY (the game’s director) and several other staff of Access Games. The developers select five areas in which they feel Deadly Premonition was most successful: character building, story and world building, distinctive music, casting and voiceover work, and the team’s hardcore passion for the title. I think this is an extremely honest review (the “what went wrong” section is all about the technical aspects of the game that didn’t work out very well, which I mentioned at the start), and I agree with the developer’s selections. In particular, I think that they have hit the nail on the head by naming characters, story and world, and music as the three most important elements of Deadly Premonition.

Deadly Premonition is a mystery, and it revolves around its characters. The central character, Agent York, is highly eccentric; his eccentricity makes him a fun character to play, and gives the story a reason to exist. His approach is unwaveringly serious, whether he is describing the mechanics of the relationship between Tom and Jerry (yes, the cartoon) or inspecting the teeth of a corpse. He’s constantly smoking, something we rarely see in heros today, but for York smoking is a kind of meditation.

One of the key elements of this game that propels it to such absolute quality is the way that York’s character is delivered to the player in the game. York talks to himself constantly, and these conversations serve to reveal much depth in his personality. Even better, the conversations appear to be with the player himself; York addresses you, the person holding the controller, in a way that few games have ever attempted (Metal Gear Solid 2 is the only somewhat similar title that I can think of). These moments of dialog are fantastic, but I particularly enjoyed the discussions York has with Zach (the name he uses to address the player, and eventually an important character himself) while driving. Greenvale is a large area, spread out over a 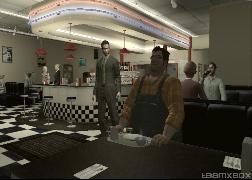 five mile region, and it takes a while to drive around. While in the car, York speaks to the player about his past, his relationships with other characters, and old movies. Few games, let alone open world games, are able to work this much dialog in without stopping for cutscenes; according to the developers, York has over 3000 lines of dialog in Deadly Premonition, accounting for half of the total dialog in the game. Other games have used dialog this way before: Bioshock used reams of dialog to teach the player about key characters and the surrounding world, and Silent Hill 3’s world descriptions are all written in Heather’s voice, teaching us much about her personality. But Deadly Premonition does it better than those games. By the end of the game we feel not only great empathy for York and some of the other characters, but also that we understand his eccentric personality.

I also enjoyed the story in Deadly Premonition. Unlike another game I played recently, Deadly Premonition kept me guessing as to the real identity of the Raincoat Killer (though I did suss another, more important antagonist very early in the game). The story is interesting, and well told. It revolves around Agent York himself, and becomes intensely personal in its final act. It’s a fairly complicated tale, and one that requires a few stretches of the imagination, but it’s pretty interesting. And that’s the point.

The third success named by the developers is music, and I wholeheartedly agree. The soundtrack for Deadly Premonition goes with its content very well. Remembering that this game is directly descended from Twin Peaks, there are a few tracks that are clearly designed to fill the same ominous-yet-strangely-uplifting role that is filled by that show’s main title theme. There’s a lot of acoustic guitar, piano, jazz sax, and humming in the musical landscape–not what you might expect from a horror game. My favorite track has to be the Red Tree theme, which includes a “lunatic improvisational section” to describe the madness that grips the Raincoat Killer’s subconscious. It fits right into freaky Red Rooms, angel twins, old men in wheelchairs and gas masks, and all of the other uncanny imagery that the game throws at you.