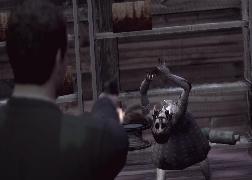 This is part three of a series of posts about Deadly Premonition. You should read part 1 and part 2 first.

Most of the technical issues with Deadly Premonition are not true problems, just systems that seem to be too simple compared to the modern state of the art. The textures and animation, for example, are pretty low quality. The aiming system is unwieldy, and for some infuriating reason the targeting reticle vanishes once you start to fire. The collision detection is pretty strict and angular. The movement of the enemies makes for challenging gameplay until a certain weapon is acquired, after which the combat is trivially easy (with the exception of one truly annoying enemy that took me five minutes to kill each time). The camera seems jumpy because it always aligns itself with the angle of the floor. These are the sorts of technical issues that crop up in Deadly Premonition; not really bugs so much as areas lacking in the polish we’ve come to expect from modern games. There’s nothing here that really gets in the way of the game play either–no fatal flaws or deal-breaking mechanics. Just technical roughness.

There is, however, a real problem that is worth mentioning. Deadly Premonition swings wildly between closed-off linear game play modes and open world, free form modes. Both are interesting in their own right, but the free form mode in particular has a lot of fascinating features, specifically, the way it manages time. The town of Greenvale is tied to a clock that controls when stores open, how characters move around, when the sun rises and sets, and there’s a huge amount of content here. You can sneak up to a character’s house and look in the window to see what they are up to at any given time. If they are home, they’ll be moving around, doing chores or watching TV. The town feels alive.

But the progression between these two modes is unpredictable. Most of the game is fixed and linear (though sometimes occurring within the open world), but at a few points the player finds himself with no immediate goal and is free to explore. The timing and frequency of these undirected sections is off. The first open world segment appears early in the game, before the player has had a change to grasp how the whole time-of-day system works yet. The player must be at a certain location at a certain time, and indeed, can choose to simply sleep in the hotel until that time approaches if they wish. I think most players are 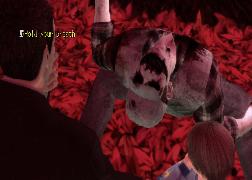 excited to get out and drive around.

Only, there’s not much to do at first; many of the shops open at odd times, and time in the open world mode progresses extremely slowly. Shenmue had a similar system and users complained enough that in Shenmue 2 they added a way for the player to accelerate time while they wait for a specific appointment. This first open world section seems to go on forever–I spent several hours of play driving around the city, running errands, finding items, and talking to characters. There are a few side missions that you can accomplish, but there’s no way to get anywhere close to beating all of them in this early section. Instead, the mode seems to drag on until finally, thankfully, the meeting time approaches and you can get on with the story. And as it turns out, that moment is the only time in the game where the player is given such freedom; every other open world segment is tied to a specific goal, or a short time limit. After spending so much time in the open world mode, I wasn’t excited to go back to it–I wanted to see the story progress, find the killer of the beautiful young girl. When I had a chance to do open world stuff again, I instead opted to beeline for the next obvious goal so that i could see what was going to happen next. Nothing forced me to do this, but since everything is tied to a clock, missing the next deadline would mean a whole ‘nother 24 hour cycle in the open world. That didn’t seem acceptable to me–I was hot on the trail of a serial killer and goddamn it, I’m going to catch him. There was just no time to waste.

I think that the long initial open world section, combined with the subsequent velocity of the plot, sucks a lot of the life out of Deadly Premonition’s dual mode design. I probably only experienced 1/5th of the total content available in the game (though it still took me close to 25 hours to complete) because I was more interested in advancing the story than driving around completing side missions. Perhaps that was the goal–to allow me to select the type of game play mode that I prefer–but it was still annoying.

But that’s the only real complaint I have with Deadly Premonition. The technical flaws were not a problem for me (though I do have a bone or two to pick with the aiming system and instant-failure quick timer events), and the rest of the content was so good that other minor flaws are easy to forgive. And really, when discussing the mechanical parts of the game design, Deadly Premonition gets much more right than it gets wrong.

Next time: Part 4: Deadly Premonition’s Otherworld and Wrap Up