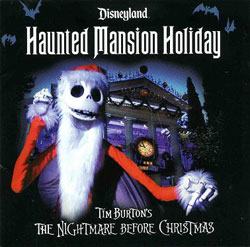 My daughter turns three this week, so we celebrated by visiting Tokyo Disneyland (which, like Tokyo Game Show and the Tokyo International Airport, is not actually in Tokyo). The place was packed with families and couples (the latter of which take total control of the park after nightfall), but otherwise strongly resembled my blurry memories of the Disneyland in LA that I visited as a kid. The number of rides that are enjoyable by an almost-three-year-old are a bit limited, and the line for Dumbo rarely fell below 50 minutes, so we visited a random selection of attractions. Most of the rides amounted to a tour of a particular brand, rendered in black light, animatronics, and luminescent paint.

In my memory of Disney LA, the best attractions were the roller coasters and the rides that weren’t tied to movie brands. Pirates of the Caribbean, for example, was fun to my 12-year-old self because it had clunky robot pirates with squirt guns. My favorite, of course, was The Haunted Mansion, which dumbfound me with its 1960s plate glass projection and rubber door technology. What impressed me most about that initial visit was how well-realized the various worlds in Disneyland are; though it’s obviously all sets and props, there’s a level of internal consistency that is extremely high quality, and lends an aura of convincingness to the whole affair. Many years later I read an essay about the rise of GUI operating systems by Neal Stephenson entitled In the Beginning was the Command Line, and I was struck by a passage about this very consistency.

Americans’ preference for mediated experiences is obvious enough, and … it clearly relates to the colossal success of GUIs and so I have to talk about it some. Disney does mediated experiences better than anyone. If they understood what OSes are, and why people use them, they could crush Microsoft in a year or two.

What Stephenson is talking about is something he calls the “Sensorial Interface”–Disneyland as a user interface that serves to simplify complicated concepts and topics into easy-to-consume packages, just as graphical user interfaces on computers hide the complexity of running an operating system from the user. When I first read this passage it made a lot of sense: if you buy into the Disney version of the world, you can enjoy an afternoon in a simplified version of reality–a fantasy place where “dreams come true.” Not unlike a good video game, really; it occurred to me during one of the many rides we went on that there’s not so much difference between a Disney attraction and say, a rail shooter (and actually, some of the new rides are rail shooters). Consider the intro to Half-Life. Or any game that is intent on giving you a convincing looking but ultimately thin backdrop upon which to build its game play, which describes most games nowadays.

But after this last visit, I’m not so sure that Disney is firing on all cylinders anymore. Yes, all the pieces are there: Tokyo Disneyland is still a carefully constructed exercise in world building on a massive scale. But something has changed since I was 12, or perhaps it’s just that I’ve grown up enough to notice the seams in the carefully-constructed faux stone walls that border the property. But like a terrible script can mar a game with the greatest of graphics, something 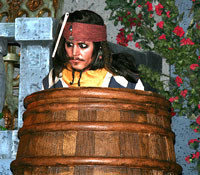 is rotten in the land of Disney, despite its impeccable construction.

The marketing of creative works seems to follow a predictable spiral; when a creative work becomes popular, it becomes a vehicle for monetization, usually via advertising, merchandising, and cross branding. Successful creative works have a tendency to attract complicated marketing apparatuses, which in turn require more creative work–or at least something resembling creative work–to continue to operate. Often, the marketing itself becomes the main vector of effort, until the core of the idea that originally made it popular–that spark that made it resonate with audiences to begin with–is lost. All that remains is a self-perpetuating marketing machine that operates on nothing but the lifeless husk that is the brand. The internet has provided a fantastic term for this transition: Jumping the Shark. I have discovered through my daughter that many famous films and books for children jumped the shark long ago: witness the series of Curious George books that were not actually authored by H.A. Ray, or the Miffy book that my daughter, at age two, correctly identified as a copy-paste job from several different stories by Dick Bruna. Absent any new content, the marketing machine can only press forward until it finally drives the brand into the ground.

I’m not suggesting that Disneyland itself has jumped the shark; as I wrote above, it’s still a marvel of engineering, and a lot of fun for kids. But certain aspects of the park have definitely sailed over that fanged fish and are now beyond recovery. That Dumbo ride with the 50 minute wait? It’s just your standard spinning rocket ride, available at any local carnival. It doesn’t even have a single black light.

Pirates of the Caribbean is a fascinating example: here we have the marketing machine spinning as it does, attempting to generate content from a thin but well-known brand (the original Disneyland ride), and against all odds the result is actually well received by critics. When handed this ultra-rare success, what does the marketing machine do? It replaces the old brand with the new one defined by the film, re-themes the original ride to make it look like the movie, and then goes about its merry way trying to drive this new film-based Pirates of the Caribbean into oblivion. The clunky pirate robots from my childhood have been replaced by ultra realistic Jack Sparrow clones that are incredibly articulate and yet lack all of the charm of their predecessors. The original ride survived unmodified for 40 years; will the Johnny Depp movies still resonate with audiences 40 years from now?

Which brings us, finally, to The Haunted Mansion (you knew I would end up here, didn’t you?). Apart from my obvious soft spot for things with horror themes, I particularly enjoyed The Haunted Mansion when I was a kid because it is rare to find so much energy put into something that is rather sinister. Stephenson’s point about Disney being experts at interface is strong here: the original Haunted Mansion carefully hits all the right thematic notes, while surprising and entertaining its attendees without actually being very scary. Nobody else knows how to make a sinister-yet-fun-and-not-scary theme 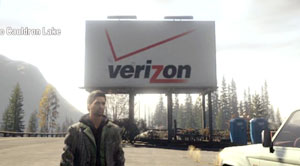 park ride; hitting that balance without scaring all the kids or coming off as corny is incredibly difficult. The consistency of theme and execution of the ride are top notch.

Or at least, I remember it being top notch. This time around The Haunted Mansion was easily the most disappointing ride that I tried (thankfully I spared my daughter; she was freaked out as it was by the Winnie the Pooh and Who Framed Roger Rabbit rides). In a blatant attempt at cross-branding, The Haunted Mansion is re-themed every fall to be a Nightmare Before Christmas ride. The Disney marketing machine initially attempted to recreate its Pirates of the Caribbean success, but when that failed they turned to the quirky (and generally fantastic) 1993 stop-motion animated film for branding backup (a cynic would note that Disney had no hand in the original production, which is perhaps why the movie was good in the first place). Anyway, despite being based on a pretty good movie, the Nightmare Before Christmas / Haunted Mansion mashup is a total failure because the combination of the two brands serves no purpose. The Nightmare Before Christmas characters appear instead of regular ghosts, snowy christmas trees are inserted into already existing scenes, and around every corner is a Jack Skellington auto-animatronic; clearly the goal here is to service the Nightmare brand. The Haunted Mansion isn’t improved–to the contrary, its careful balance of theme consistency and entertaining spooks is completely destroyed by the injection of this foreign brand. The result is a mess–it’s not very fun, it’s not very spooky or sinister, and it’s not even a very good vehicle for the Nightmare characters because it doesn’t play to any of the strengths of that brand. It’s a combination borne, I think, of convenience; there are no other Disney rides that have sinister themes, and thus no other place that the marketing machine could conceivably plaster the Nightmare brand.

If there’s a point to all this, it’s not just that marketing often serves an anti-creative purpose. It’s that horror in particular, being a genre defined by theme rather than by content or presentation, is vulnerable to this kind of careless brand pollution. Disneyland works very hard to present to you a believable world, but its work is sabotaged by its need to somehow integrate modern brands into existing attractions. Nowhere is this more evident than The Haunted Mansion, and I think the horror theme of the ride itself relies on a carefully calculated, easily disrupted combination of elements. The insertion of an unrelated brand destroys this balance, and renders the entire ride pointless.

The takeaway implications for horror games are that world consistency is key to believability. When the seams start to show, be they jarring juxtaposition of brands or, say, bugs with collision detection, they instantly render the fiction of the game moot. Other types of games can get away with a few flaws; some might even benefit from a little real-world branding (Wipeout XL?). But horror games rely on world believability above all else, and often trade other important elements (such as tight player controls and complex combat systems) in order to increase that believability. Just as The Haunted Mansion is rendered impotent by the grafting of the Nightmare Before Christmas, when a horror game suffers damage to its fiction, there’s no reason to keep playing.

9 thoughts on “What Disneyland can Teach us about Horror Games”