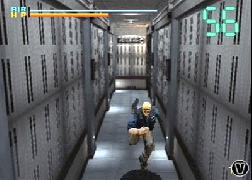 As soon as the camera cuts he’s going to be running the opposite direction.

One of the ancillary benefits to moving is that it gives me an opportunity to reconfigure my home AV setup. I’m sure lots of people dread the process of trying to figure out which cable goes in which port and how to best plug everything into a single wall outlet, but I enjoy it. I’m never satisfied with my setup, but once it’s all up and running even the most minor adjustments require moving furniture and sorting through a mass of tangled cables. Moving gives me the opportunity to pull everything apart and put it back together again, a chance to reorganize.

My setup isn’t high-end or anything. It’s just a lot of game consoles, a receiver, and a DVD player. Still, there are a bunch of decisions to make, like how best to orient my consoles within the TV cabinet without having to worry about them overheating. During this last move I was able to create some new space by putting both Wiis (yes, I have two; region locking can die in a fire) on end and adjusting the height of one of the shelves. This opened up just enough space for my Saturn, which has been sitting in a box for the last two years.

I have a white, Japanese Saturn. Saturn games can still be found in good used game stores in Japan, usually for a few bucks a piece. The problem is, I’m not interested in a lot of the library; NiGHTS is fantastic, I own various Virtua Fighter and Fighters Megamix editions (mostly for nostalgia), and there are a couple of other gems here and there, but maybe not enough to warrant using my precious TV cabinet space for the console. The majority of Saturn games that came out in Japan appear to be dating games or virtual novels, two genres in which I have zero interest. But there is one game that I’ve wanted to play for a while that is exclusive to the Saturn: Deep Fear.

Deep Fear is pretty much a Resident Evil clone, as far as I can tell, but it’s sort of interesting to me because it’s the first of many “horror on a ship/oil rig/underwater platform” games (others include Carrier, Cold Fear, etc). I don’t have high expectations for it, and playing a game made for the Saturn in 1998 on a high-def TV here in 2011 is pretty rough on the eyes, but the first few minutes are pretty promising. There’s some standard RE controls, an interesting-sounding oxygen/air lock mechanic, and plenty of zombies or flesh monsters (at this resolution, I can’t quite make out the details) to shoot.

Actually, to tell you the truth, the control scheme is much more interesting to me than the game itself. I’ve written about the evolution of control schemes before, and Deep Fear is 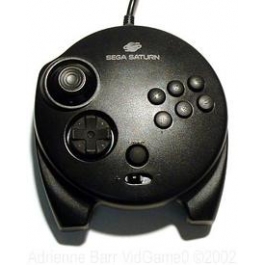 an interesting link in the evolutionary chain between the original Resident Evil tank controls and the more modern systems in use today.

Using a regular Saturn controller, Deep Fear controls exactly like Resident Evil. Turn in place, R1 to aim, another face button to shoot. Standard stuff. But when using the NiGHTS analog controller, control suddenly becomes camera relative; the direction you push the stick is the direction the character walks, which is similar to how most modern 3D games work. In case you never heard of NiGHTS, it’s a pretty phenomenal Sonic Team game that originally shipped with a special controller. The NiGHTS controller is a precursor to the Dreamcast controller–the two look extremely similar–and was the first console controller to ship with an analog stick (as far as I know, anyway). There’s actually a little switch at the bottom of the controller that lets you switch between digital and analog mode, just for backwards compatibility. As a post-NiGHTS game, Deep Fear supports both.

What’s interesting is, Deep Fear doesn’t support camera-centric controls very well. It controls beautifully when using the analog stick to move within a single camera viewpoint, but when the camera cuts the analog stick input is immediately recalibrated, causing the protagonist to suddenly change direction. You can easily get into a situation where the character walks out the edge of the shot, triggers a camera cut, and then immediately walks off the edge of the new shot back into the area you just were because the rotation of the camera between shots causes the character to rotate as well. When you consider that each new camera angle takes a few seconds to load, you can see why this problem is so annoying. Every time the camera cuts one must train himself to release the analog stick until the new view appears and the new definition of forward is clear.

This is exactly the problem that Resident Evil’s oft-decried control scheme is designed to avoid. The same year Deep Fear came out, Parasite Eve came along and solved the problem with smart heuristics. The best that the developer, ISCO, was able to achieve is Resident Evil-style tank controls as a fallback. (As an aside, GameFaqs reports that ISCO is also the developer of one of my favorite NES games).

I didn’t get very far in Deep Fear yet, as it turns out that my Saturn controller’s R-Trigger doesn’t work. For those of you who remember the Resident Evil control scheme, you will immediately recognize why this is a huge problem. Once I have acquired a replacement controller, I’ll give it another go. I think it’s probably worth using half-assed camera centric controls rather than trying to dredge up the memory of character centric movement from the recesses of my brain.

Update: Thanks to @necrosofty for pointing out that NiGHTS isn’t just Yuji Naka–Naoto Oshima probably deserves more credit. They both worked on it, so I changed the text to read Sonic Team.