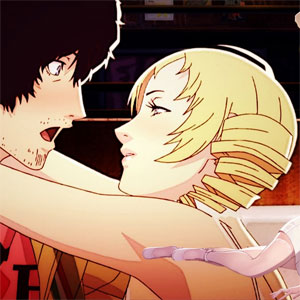 I happened to be in Japan a few weeks ago when Catherine hit the shelves. I didn’t really know what to expect from it, other than it is some sort of sexy, stylized horror puzzle game, or something. Against my better judgement I bought the game for full price. The stylistic rendering and promise of a highly-weird, somehow sex-infused plot were worth the price of admission. Any developer willing to take that much risk deserves a purchase, I figured.

First: the art and rendering tech is phenomenal. Best cel-shading I’ve seen in a video game, except for maybe Ni no Kuni. It’s difficult to tell when the cutscenes end and the realtime stuff begins. The art style is a really nice manga chic, and it goes well with the excellent soundtrack. Turns out that part of the game really is a puzzle game; Vincent the protagonist must survive a nightmare each night consisting of climbing a structure of movable blocks. The puzzle sections are quite difficult, though a recent patch made it slightly less aggravating to continue.

But the star of this show is the story, the characters, and the game play based around the mechanics of the narrative. Vincent is being pressured by his long-time girlfriend to get married, but he’s having trouble with commitment. One of his friends married young and is now divorced, while the others are single and can’t relate. Katherine is a good woman, he says, but he can’t get over this fear of marriage. And though he can’t remember it during the day, his dreams at night sometimes involve what appears to be her giant hand, reaching up from the darkness to drag him down from his block tower into the depths.

Vincent’s situation takes a dramatic turn for the worse when he has too much to drink one night and wakes up next to a strange girl lying naked in his bed. The new girl, Catherine, is cute, energetic, and much younger, and though he tries to tell her that he’s made a mistake and he’s already in a relationship, it never quite seems to work out. Vincent’s nights are plagued with horrible, possibly life-threatening dreams, but his waking hours are spent trying to figure out a way out of the web of lies and infidelity that he’s found himself trapped within. Oh, and he’s starting to hallucinate a little as well.

As you can imagine, things go downhill from there. The story is designed to make the player feel uncomfortable. From Vincent’s perspective, he never intended to cheat on his girlfriend or to lie to his new lover–things just sort of worked out that way; the situation is beyond his control. Every scene is related to the push and pull between Katherine and Catherine. He gets e-mail from them on his phone, to which he must carefully respond (Catherine is the first game I’ve ever seen that lets you write a “hope-this-doesn’t-anger-her-further” mail to your girlfriend). If he stays out too late, he risks running into Catherine again, but if he goes home to sleep he’s back in nightmare hell. His number one priority is ensuring that the two women in his life do not find out about each other.

Of course, there’s more to it, I’m sure. Even only a few hours in the whole thing is fascinating. I mean, have you ever played a game like this? Ok, maybe there’s some crappy dating game or visual novel out there with a similar premise, but I’m talking about a non-text-based game with this kind of story. Any takers? I can’t think of any. The whole thing is so out of left field. While Catherine has no real nudity, it has plenty of suggestive scenes, but none of them are titillating in the least. On the contrary, given the situation that the protagonist finds himself in, those scenes are absolutely nerve-wracking. That sort of narrative pull is rare, and extremely difficult to produce in games.

Did I mention that there’s a sort of Everybody Votes online quiz component? Or that you can spend time walking around a bar, talking to other patrons and playing video games in-between puzzle sections? Or that other people trapped in the nightmare puzzle world appear to Vincent as sheep?

I don’t know what’s going on here, but I like it.