I have written before about how product marketing for video games and everything else appears to be driven by enormous, autonomous, self-propelling machines. Huge apparatuses, employing hundreds of people, designed to pounce on any work that catches the fancy of the public, capitalize upon it, and keep it at the forefront of public consciousness until it has been stripped of all value. Marketing behemoths, like the industrial washing machines in The Mangler, sucking in creative work and spitting out all manner of spin-offs, advertising, and cheap plastic toys. They perpetuate a property (not just a work–it’s now a brand) long after it should have been put to rest, forcing it to stand up and perform tricks until its skin sallows and its teeth fall out and it becomes disgusting.

Sometimes this iron lung works for a while. Perhaps the original creators use the opportunity to continue to create interesting work. Perhaps they leverage their new-found fame and resources to make something more interesting than before. Perhaps they’ve had plans for a series of works all along. Perhaps they were smart enough to negotiate for creative control of their art. But very often the work was never intended for serialization (we need look no farther than the sequels to The Matrix to see this phenomenon). The concept cannot survive significant extension without change, and change is exactly what the marketing machine does not want. In the mind of that metallic beast, the magic formula’s already been found; now they just need more of it so the promotion engine can be perpetuated. Even if the original authors quit the project, the marketing machine must continue. At some point, the marketing, promotion, t-shirts and keychains have become more important than the work that originally spawned them. As far as the marketing Neubaufahrzeug is concerned, any extension of the content is acceptable. In fact, if the original authors have left, they might as well make the new content themselves. And that’s when things start to get weird.

After my daughter was born I became aware of a rather sickening trend in the world of children’s books. Many authors of famous children’s characters (think Curious George) are no longer alive, but their books remain in high demand. In order to fill that demand, the marketing apparatuses attached to each character have spun their wheels, exhausted some steam, and produced new books by cutting and pasting pictures from other books and then making up some story to go with it. In some cases they’ve even hired artists to draw in the original author’s style. H.A. Ray wrote about seven Curious George books. He died in 1977. But Amazon has 109 Curious George books for sale, most of which have a publication date of 2008 or later. 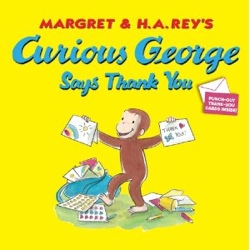 The titles cleverly proclaim that this is “H.A. Ray’s Curious George,” with no other author name in sight, but are careful to avoid actually attributing the work to Ray, since he is long dead. Predictably enough, these modern Curious George books are terrible; they are nonsensical and condescending to their audience. I mean, if you had any talent at writing children’s books, would you take a job ghost writing Curious George Saves His Pennies?

The faux children’s books are pretty bad, but occasionally the marketing machine gets so excited about something that their behavior becomes almost incomprehensible. Readers older than 30 will probably remember the absolute mania that gripped the country when the first Batman movie was released in 1989. There was a Bat-symbol in every storefront, a guy in the full movie getup peddling Bat-keychains on every corner. Stores unaffiliated with Warner Bros. made up their own unauthorized marketing materials just to get in on the action; I remember seeing a used clothing store that featured hand-painted Joker coat hangers in its window. America drowned in Batman merchandizing that summer long before the film was even released. In the end, the merchandizing pulled in almost twice as much as the movie’s box office sales. The guys who drove that particular marketing behemoth were probably high-fiving each other for years afterwards.

Something similar was afoot in Japan this spring. There’s a new movie in the Ring series, and to say that its marketing is aggressive is quite the understatement. Sadako 3D, as the film is titled, is a continuation of the Ring series. This time the curse infects people through an internet live stream, conveniently hosted (and prominently referenced throughout the trailer) by Nico-Nico Douga, a real social video site. Though ostensibly based on a novel by Koji Suzuki, it’s clear that this film exists because some slumbering marketing device woke up suddenly and saw an opportunity to wring more money from the series. Like Batman, Sadako is a character that is a part of the public consciousness. The target audience, as far as I can tell, is high school and college students; people who were probably too young to see the Ring when it was first released in 1998 but are nonetheless aware of the character. Who is Sadako? She’s a monster with long hair and she comes out of your TV. This is common knowledge.

In in attempt to exploit this knowledge the marketing machine behind Sadako 3D has apparently decided that they should remind the citizens of Japan of Sadako’s character with a coordinated media blitz. Only, we’re not just talking guys in Bat-suits selling keitai straps on the corner. We’re talking an army of people dressed as Sadako (complete with a TV on their chests for her to come out of) terrorizing Shibuya 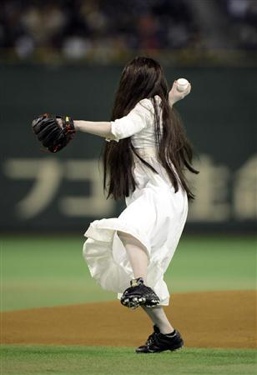 on the last day of a national holiday week. A giant Sadako is driving around on the back of a flatbed truck. Sadako apparently joined a boy band and attended the first screening of her new movie. Sadako has a tie-in with Hello Kitty. Sadako has even been recruited to throw the opening pitch at several baseball games. Though the movie appears to be serious, the film is being promoted as a parody of itself; Sadako has come an ironic symbol of a (slightly) older generation.

I bought a Sadako 3D mug. I had to have it. A parody of a parody, if you will. It’s a mug with a dark blue box on it and the words “404 File Not Found” printed near the top. When you put hot liquid in it, the blue vanishes to reveal an advertisement for Sadako 3D underneath. I drink my coffee from it every day to remind myself that the logical extreme for marketing isn’t logical at all–it’s absolute lunacy. We are watching a marketing behemoth systematically drive an already lifeless work (thanks to the original series of terrible sequels that came out years ago) further and further into the ground. It’s so far gone already that the only way they can continue to extract money from it is to turn the husk of the original story into a joke. Who knows if the movie or the novel it’s based on are any good; the effect of the marketing machine’s blitzkrieg is the total devaluation of The Ring as a series.

Hideo Nakata’s 1998 film set itself apart by rejecting the tropes that marketing machines drove to the forefront of horror in the 1980s and 1990s. It had no blood, no nudity, and no violence. There were no teenagers, no shower scenes, no stalkers, and no metal music. It was surprising and effective because it was simple and focused. It was the antithesis of the contemporary horror film mold at the time, a disruptive force that raised the quality bar for horror films around the world for several years. Now, thanks to relentless efforts to squeeze as much blood from this particular stone as possible, The Ring property has become everything it originally was not.

If we look to Batman as an indictor, increasingly terrible Sadako films will probably continue to be made as long as they can pull in a profit. Only when the franchise has been completely exhausted will it be allowed to rest in piece at the bottom of a well. That is, of course, until the inevitable reboot.

12 thoughts on “Slash and Burn”