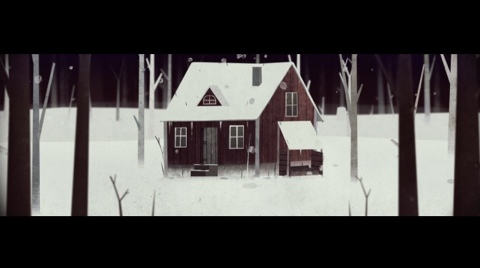 Given the tremendous glut of mobile games available today, it surprises me that there aren’t more horror games. There are a number of zombie shooters, a bunch of Halloween-themed games, and some interesting text adventures, but very little designed to actually scare you. Other than End Night and amateur-hour Slenderman knock-offs, serious attempts at horror are all but nonexistent on Android and iOS. Don’t even get me started about Dead Space Mobile.

Until now, anyway. Recently Swedish developer Simogo has released Year Walk for iOS devices, and it’s pretty dang awesome. The premise involves an ancient Swedish tradition of “year walking,” walking through the forest at night on a certain day of the year after fasting in order to have a vision of the future. You’ll explore a confusing landscape by scrolling and swiping to move in first person, and along the way puzzles will present themselves. The game even has a companion app that explains in more detail the mythical characters that appear in the game, and you really must download that as well.

As far as horror games go, Year Walk is pretty good. It has some flaws–I’m not sure about swiping down to move forward and several of the puzzles are just pattern memory things–but they are minor. The art and sound is very strong, and the story is very interesting (though I can’t tell you why). It’s a little bit light on the horror aspects, to tell you the truth, though horror is by far the best genre to describe this game. All in all, the design is solid, interesting, innovative, but not revolutionary.

What makes Year Walk so special is that the core gameplay has been architected around a tablet interface. This isn’t just a horror game on a tablet, it’s a tablet horror game. Everything from interesting multi-touch puzzles to the presentation of the world itself to the integration of the companion app fits naturally with the host platform. Year Walk is a native citizen of mobile, and its design works because of this deep understanding of the types of interactions that only a mobile device can provide. I can’t give you too many details without spoiling it, but it’s hard to imagine this game running on any other platform.

If you have an iPad, give Year Walk a go. I hope we see a lot more like it.