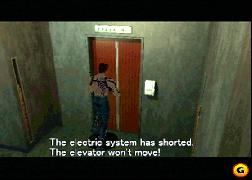 Ah, reconnecting the power to the elevator. So much fun every time.

So here is that blog post. Thomas and I have racked our brains to produce the following USEFUL TIPS FOR HORROR GAME DESIGNERS.

A few people have commented since we posted this today that there are a lot of complaints about Resident Evil in here. That’s true! But we worked to ensure that each tip addressed a trope that can be found in multiple game series. None are exclusive to Resident Evil, and most are employed by five or six different games. Read the feature here..