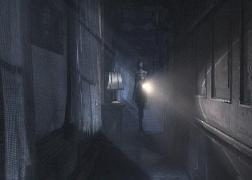 Fatal Frame 4, which I keep coming back to every few months but never seem to complete, has a neat item pickup mechanic. Your character, a young woman trapped in a dilapidated hospital on a forbidden island full of moon ghosts, slowly extends her hand to reach for an item when you hit the A button. In fact, you need to hold the A button down or she’ll draw her hand back. As you hold the button down, her hand extends and the camera moves to follow it. There is a slow approach, a pregnant pause, and then ding!, a Shinto bell indicates that she’s got the item.

Except sometimes, every tenth item or so, a ghostly hand will shoot out of the darkness and grab her wrist just before it reaches the item. A stinger plays and the camera cuts to an animation of the protagonist fighting to get the hand off. And then the game resumes. It’s a pop-out scare built right into the item pickup mechanic.

player from feeling confident and in control.

The Resident Evil games have, from time to time, used the inter-room door loading animation as an Interaction Feint. A clutch of zombies appear and attack in the middle of what appears to be another boring room load. There are other examples, but they all serve a similar purpose: to keep the player from falling into a comfortable routine.

Even non-horror games use Interaction Feints. One great example is the Mimic in Dragon Quest 3 (and his jerkwad counterpart in Dark Souls). This is a monster disguised as a treasure chest that attacks the player when he tries to open it. It’s a great Interaction Feint because the player opens many chests and is excited to find them. He is thinking of what might be inside, and is (ideally) caught completely by surprise when the Mimic attacks. The Mimic can be pretty scary, too. In Dragon Quest they can often kill a party member instantly. Maybe next time the player won’t approach a chest so carelessly.

I think that pop-out scares have value in extreme moderation. The best pop-out scare is the kind that forces the player to wait for the next pop-out event, which should ideally never come. A good pop-out can coil the player like a spring, and then force them to stay that way, with no chance to unwind.

The Interaction Feint is a particularly insidious form of pop-out scare because it forces the player into a state of hyper vigilance. The player must now be careful no matter how routine the operation. If he forgets and relaxes, the Feint can achieve the shock value of a good pop-out scare. But it’s even better if the player doesn’t forget, because in that case he must worry about every single item he collects, every door he opens, every chest he investigates. Now a routine, nonthreatening, uninteresting interaction has been transformed into something that induces tension. That’s pretty cool.

12 thoughts on “The Interaction Feint”