The plastic plate affixed to the entrance to the changing room says “Automatic,” but I have to press it anyway.  The door glides open, a Star Trek gateway 245 years early, and quieter too.  After removing my shoes I pass through a cloth curtain hanging over a entry into the main changing area, where I strip down to my skin and leave my clothing in a wicker basket.  At the end of the room is a dark glass door, fogged by condensation, that emits a suction pop when I open it.  Beyond is the main bath area, several shallow pools separated by hard tile floor, each glowing quietly in the dim light.  I sit on a squat stool and shower, making sure to rinse my station when I am done.  Then I slip into the silk of the closest pool and feel my skin light up with the almost-but-not-quite needle pain of 43° C water. 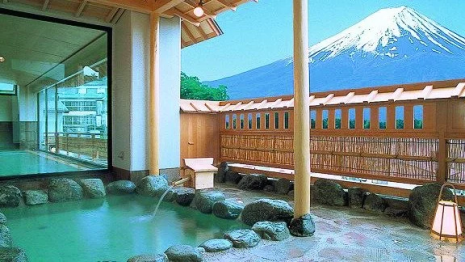 “Westerners can’t handle Japanese onsen,” a high school teacher once told me.  Star Trek: The Next Generation posters adorned the walls of her classroom.  Mrs. Howell had returned from an extended sojourn in Japan armed with a level of fluency that I now recognize as exceptional.  “Five minutes, tops.”  I looked at the poster of Jean-Luc Picard that bordered a hiragana chart and decided that, when I eventually got myself to Japan I wasn’t going to wimp out with the rest of the foreigners.  If Japanese people could do it, so could I.

Fast forward to me at 20, mid-way through a year of study abroad, gingerly stepping into a hot pool at a remote bath house just east of The Great Seto Bridge.  It is a shocking level of heat, so hot that it feels cold, frostbite jaws sinking into my calves.  The water hasn’t yet reached my knees but I’m unable to continue, so I sit down on the edge of the pool and hope that this is a necessary step in the process of acclimatization.  Perhaps once the outer layer of skin has filleted away the nerves below will deaden.  On the other side of the pool a Japanese man sits neck deep in the magma.  His glasses have fogged up so I can’t see his eyes, but he appears to be asleep.  Or dead.  Or possibly meditating.  Firewalking Yogi have nothing on this guy.

Slowly, painfully, I lower myself into the water up to the waist.  The initial Hellraiser needle attack has passed but in its place is an unrelenting heat, a sustained, drawn out sting, a synthesizer note held too long.  Like having blood drawn.  Set phasers to hematidrosis, people.  After two minutes I eject and find that the lower half of my body is cosplaying as boiled shrimp.  I am self-conscious about being naked in public but there’s no way to hide my eggshell whiteness here.  The Yogi turns to look at me as I leave, alive after all and apparently unable to feel pain.  Shucking my weaksauce foreigner onsen tolerance was clearly going to be a lot harder than I thought.

Later that year I have another chance, this time in a hotel on an island near Hiroshima, the one with the famous torii gate standing in its bay.  I was able to abide the circular marble pool in my hotel up to my navel for almost five minutes.  In Tottori, I tried my first outdoor onsen at a ryokan.  The cool night air helped regulate the water’s rough-play acupuncture and I was able to sink in up to my neck.  I shared the pool with a grandfather and his two-year old granddaughter, who giggled as she splashed hot water at him from the safety the edge of the bath, submerged only to her ankles.  It dawned on me that the key to enjoying this practice might be repetitive exposure.  Despite managing to dip deeper into the pool I was still unable to remain in the water for more than a few minutes.

I am envious of how Japanese people describe their bath experience.  The feeling of ultimate relaxation, of ejecting pollutants from the body through sweat.  They speak of an end of muscle pain and an opportunity to think deeply.  Even the home bathtub, a deeper and more advanced contraption than the ceramic casks we have in the West, sounds rapturous when described by the Japanese.  But underlying my desire to bathe like the Japanese is a deeper, more primitive motivation: pride.  Pride that I can operate within a foreign society correctly.  A challenge to myself to learn the rules and execute them, as if culture was just a computer program for which the proper input will return a success code.  To boldly go where no foreigner has gone before. 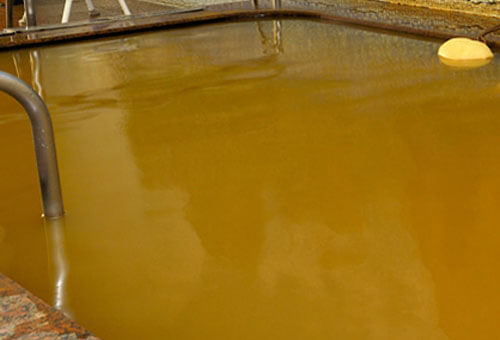 The arrogance implicit in that train of thought is not lost of me.  My experience abroad as a student was one of normalization, of figuring out how to find my balance on an unfamiliar cultural surface.  I like to think that I exited that process with significantly more humility than I had going in, but a quiet voice in the back of my head wonders not-so-subtlely whether the process has ever really ended.  Surely, the voice whispers, there is no greater display of hubris than claiming freedom from arrogance.  Captain Kirk came in peace, but that didn’t stop him from treating the remote planets he encountered as lesser than himself, mired in their own weird ways, a puzzle for him to decipher.

Still, I have returned to Japan and visited an onsen nearly every year for the last two decades.  In Hakone I enjoyed a private rotenburo, an outdoor bath attached to a hotel room.  In Okayama I tried yakuto, a medicinal bath, which came with a warning that my “important bits” would “tingle,” a description that wholly undersold the level or duration of pain the yellow water had to offer.  In Tottori I submerged myself in a lightly irradiated sodium chloride concoction that is supposed to help with everything from high blood pressure to gout.  One evening after dusk I got into a kawaraburo, an outdoor, mixed-gender, zero-privacy hot springs in the middle of a river.  I expected to find mostly old men there and was surprised by a clientele of young couples.  I talked to some guys who built industrial ships in Shimane and were visiting for a company offsite.  Once, in an attempt to survive a brutal 36-hour business trip to Tokyo, I checked into a sento in Roppongi, an artificially heated bath and sauna, and quickly decided that Roppongi is not the best place for public bathing.  My wife and I even tried a few rounds of ganbanyoku, which eschews the bath altogether and instead involves wearing pajamas and laying on a very hot slab of rock and void yourself of moisture through your pores.

This year, sitting in an outdoor bath in Hokkaido, with snow lazing just beyond the thatched awning, I realize that I have, at some point, gotten used to the heat.  The delta of time between my birth and my first onsen attempt is now shorter than the subsequent term between that initial dip and today.  Oddly, the conquering of my foreign “weakness” doesn’t seem so important any longer.  I can’t even remember when I stopped thinking about whether or not I had cleared Mrs. Howell’s five minute threshold.  With age my waistline has rushed forward while my metabolism has retreated, but even so I’ve lost the awkward self-consciousness about my body that plagued young adulthood.  When I bring my son to the onsen he splashes and swims around and switches pools every few minutes, but he doesn’t seem to mind the heat.  I make him submerge his body up to his neck and count to ten before he gets out, a practice I’ve seen other fathers enforce.  Hopefully he’ll never feel that an enjoyable evening in a bath is about having something to prove. 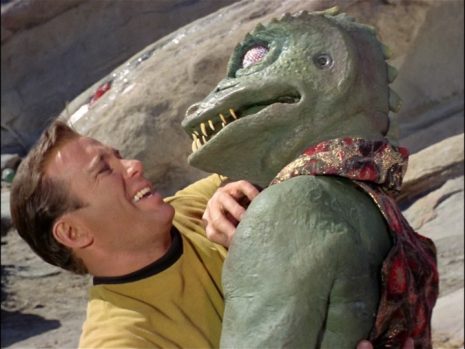 Come on, Kirk. Just one smooch.

Maybe this is what real cultural normalization is about.  Maybe it’s about not worrying if I can execute a traditional procedure with rigid precision, not kicking myself when I should have said gobusatashiteorimasu instead of ohisashiburidesu, not feeling self-conscious on the train, and not timing how long I can sit in a hot bath.  Perhaps normalization is having the confidence to ignore the script and the humility to do it without making an ass of myself.  I’d like to think that my onsen experience is an indication that I’ve achieved some level of real normalization, a feat that doesn’t have so much to do with tolerance to hot water after all.  Cue Captain Kirk embracing his latest alien conquest as she swoons in his weird, foreign arms.

Then again, that little voice whispers, maybe I’m not quite there yet.