In Resident Evil, zombies have taken over a big mansion and you have to stay alive by shooting them and solving puzzles.  You have to conserve ammo and read documents to uncover the mystery behind the mansion and the zombies.

While technically true, this sort of description doesn’t actually describe what you do from moment-to-moment in Resident Evil.  A more accurate description might be:

In Resident Evil you visit a large number of rooms. When you enter a new room, you look for zombies and shoot them.  Then you run around the edges of the room and press the search button to find items and documents and keys and puzzles. By finding items and solving puzzles you can open up doors to new rooms. Eventually you visit all the rooms.

This description isn’t sexy, and it ignores the narrative elements of that game, but it’s accurate.  If you recorded all the button presses used in a Resident Evil play session I’m sure you would find that “search” is one of the most common operations, second only to movement.  Resident Evil, and almost all horror games from that era, spend a lot of energy on the ransacking of the game world.  In these games, missing a hidden item can cause difficulty to increase or even stall progress completely.

Ransacking a room isn’t a very exciting game mechanic, but it is one of the pillars upon which many horror games are built.  The side-effects are numerous: the pace of the game is slowed, players treat the environment as an area to be systematically swept, and item collection becomes synonymous with survival.  Ensuring that every single item has been collected becomes an important, as missing even one could have consequences later.  For example, Silent Hill has items that ruin the ending of the game if missed.  The message is clear: search everything, everywhere, or run the risk of negative repercussions.

On the upside, ransacking forces the player to pay attention to the environment. Resident Evil and its ilk love puzzles that involve opening up a secret area or revealing a previously hidden compartment because these force the player to pay attention.  If you want all the items you’re going to have to open all the doors which means you can’t just go running around shooting zombies haphazardly.  It’s a mechanic that requires focus, and as a result, gives the designer a lot of opportunities to inject story information into the player’s consciousness.  You had better pay attention to the details of that painting and read all of the text in that document if you want to ensure that you’ve found every last nook and cranny there is to find.  Resident Evil in particular doubles down on this approach by making health, ammo, and save items rare commodities that must be collected at all costs. 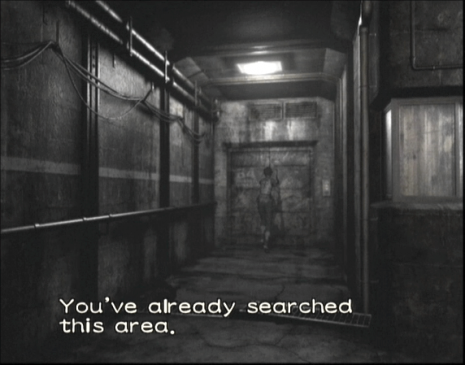 Hope I found everything.

On the other hand, ransacking can make you play the game like an idiot.  The mechanic encourages you to believe that every item must be found, and so you traverse the corners of every broom closet and alleyway just to ensure that nothing is missed.  It creates anxiety: whenever a ransacking game closes an area off without warning (e.g. in a cutscene), you feel uncomfortable about items you might not have found.  Even worse, collectors going for every item must anticipate upcoming game events that might restrict their access to a segment of the level map.  The problem is exacerbated when the map is large.  The way forward is obvious, but you always take the alternate path, never forget to look under the stairwell, and methodically check every stall in every bathroom.  Each time there is a branch in the map you have to guess which direction is the “real way” and which is likely to dead-end in an item room.  This pattern is especially frustrating when it conflicts with a narrative that wants you to move forward.  The level design in The Last of Us and Alan Wake suffers from this: the story says, “GO! GO! GO!” but the map design is like, “hey, maybe check out this door over here?”

Ransacking encourages the player to think about his environment as a puzzle rather than as a real place.  We’re checking mental checkboxes as we clean rooms out, taking note of rooms we’ll need to return to, maintaining a ledger of tasks completed and tasks outstanding.  Obscure has a character who’s special power is to declare whether all the items in a room have been found, and this power is the most useful of all the characters in the game.  This mode of thinking is not the most conducive to scaring the player.  In fact, it often becomes an annoying chore.  We’re paying attention, but only because we don’t want to be burned later.  Horror games about ransacking and collection must find ways to give the player breathing space, where the pressure of finding every last thing is eliminated and they can enjoy the story for its content.

One mitigation strategy is simply to make items of interest flash or sparkle.  This approach releases the stress of ransacking by making the operation much easier: you can simply look at a space and see if there’s anything to do there or not.  When there’s nothing to see, the player can swiftly move on to something else.  The problem with this method is that it removes the focus element that ransacking provides, and makes it more difficult for the game to grip the player with its narrative.  Fatal Frame and many other games thus employ an uneasy middle ground where some items sparkle but others do not, thereby affording narrative detail for players who wish to consume everything while releasing others from the need to exhaustively search.  Still, when I play these sorts of games, I can’t help but worry that I’ve missed something important, and end up turning the whole place upside down just to be sure.

Resident Evil 4 threw ransacking out the second-floor window by removing the need to find specific items.  There are very few keys or puzzles in that game, narrative sequences tend to be built into the core progression path, and consumable items such as ammunition and health are available in infinite supply from fallen enemies.  There are still item boxes to find hidden away for players who go exploring, but by removing the need to search an environment for items the design ensures that nobody worries that they missed something. 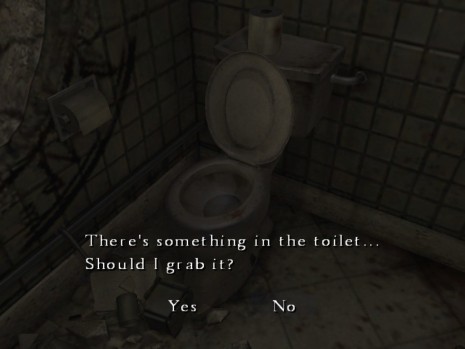 More recently, Amnesia takes an even more dramatic approach by simply eliminating items altogether.  Sure, there’s an occasional key to find, but with no combat and no ammo, very little item management is required.  Lamp oil is rationed to force the player to turn out the lights, but if you do so then oil supply is not a major concern.  In Amnesia, every drawer of every desk can be opened, but there’s almost nothing to find because ransacking is not the mode of thinking that the developers wish you to assume.  The Amnesia school of thought dictates that by removing your ability to think of the environment as a system, you’re forced to think about it as a real place.  That’s probably one of the reasons why that game is so much scarier than most games from the Resident Evil era.

In Dead Secret, the VR murder mystery game I’m building with my team at Robot Invader, exploration of the environment is the primary mode of play.  There is no combat or health, but we do have other sorts of items, and you’ll need to search every room throughly to find them all.  To prevent ransacking from becoming a chore our approach is to put a high concentration of items and documents in each area.  You will not spend your time barraging through a series of rooms, fingers crossed that you haven’t missed anything.  On the contrary, you will take your time in each room to discover the interesting clues it has hidden away, and you can come back later if you want.  Our items do not flash, but sweeping the environment is not difficult because the reticle changes when it passes over items that can be collected.  When experienced in virtual reality, physically looking around your environment becomes one of the main modes of play.

My goal is to get you to focus, to think about the content of the rooms, without forcing you to exhaustively check every single corner.  It’s a careful balance, and hopefully it works.