Life is Strange is, hands down, my game of the year.  The premise is easily explained (My So-Called Life + mysteries + time travel), but the feeling of playing this game is nearly impossible to put into words.  I write a lot about meaningful decisions on this blog, and Life is Strange is a game designed to make every single decision weighty.  The game revolves around the feeling of decision ownership: though you have a lot of power when it comes to making and revising choices, eventually you must own up to the effects of all of your decisions.

Life is Strange works because it spends nearly all of its time on character development.  The people in Life is Strange are real, and when they suffer because of something you did, it hurts. 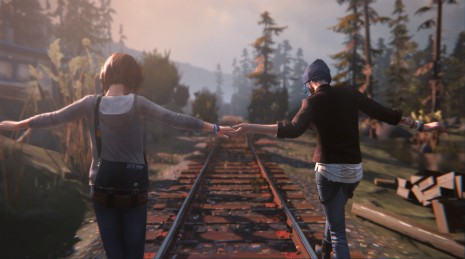 Life is Strange is about replaying a moment to see how else it could of come out.  That’s the central gameplay mechanic: short-term time rewinding. Yet, when I finished it and got one of the two endings, I couldn’t bring myself to go back and get the other.  I made my choices.  Now I have to own them.

As regular readers know, I think that Silent Hill: Shattered Memories is one of the best games ever made.  When I heard that the writer/designer of that seminal title had released an indie murder mystery called Her Story, the money in my wallet crawled out and made the purchase autonomously.

Her Story only has one screen: a ’90s era computer terminal that hosts an aging video database system. You can search through the stored videos by entering keywords.  All of the videos are clips of a woman giving a statement about the disappearance of her husband.  It’s up to you to identify clues and decipher what really happened.

The best mystery novels make you feel like you are the detective, tracking the clues and piecing together what happened before the author reveals the truth.  Her Story evokes that feeling with incredible craft.  Satisfaction comes not from reaching the end and finding out what happened, but ending the game when you reach the point that you are confident in your own theory.

That’s all I’m going to tell you about Her Story.  The rest is up to you.

When you’re done, go back and read Thomas Grip’s blog on horror games.

Other really good games I played this year: Metal Gear Solid V, Splatoon, TIS-100.  Add to that titles I really want to play but haven’t yet (Until Dawn, Galak-Z, Everybody’s Gone to the Rapture, Fatal Frame 5, The Room Three, Fallout 4, Among the Sleep, etc), and 2015 seems like a pretty good year.  Here’s to the next one.