In 2013 I had the opportunity to chat with Steve Gaynor about his then in-development mystery game Gone Home.  A playable version was on display at the Game Developer’s Conference’s Indie Megabooth, and while I was interested in some of the other titles being shown (like Thirty Flights of Loving), I was there to see his game.  We were far enough into the development of Dead Secret to realize that it might have significant overlap with Gaynor’s title, and I’d come to check it out. 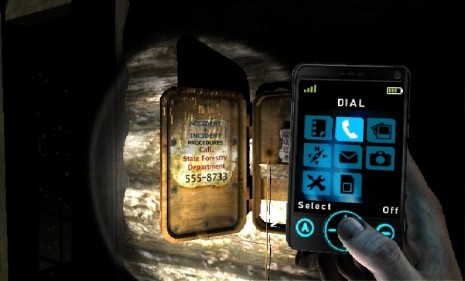 To my relief our respective games were quite different, though we’d both made a lot of similar decisions.  Chatting with Gaynor I found that we’re both big fans of Silent Hill: Shattered Memories and have both spent a bunch of time in Portland, Oregon. Midway through our conversation I turned to Steve and asked him if he had set Gone Home in the mid ’90s to deal with “the cell phone problem.”

“Yep,” he said. I didn’t have to define the term–he knew what I was talking about immediately.  There are a lot of other good thematic reasons to set Gone Home in the 1990s, and if you’ve played the game you know why, but my interest was functional: the cell phone problem is hard, and I am interested in what other game designers think of it.

If you play a lot of mystery or horror games you might have noticed that there are not a whole lot of them that take place after the year 2000.  There are many that take place in the 1980s and 1990s, as well as those further in the past (including Dead Secret) or in the far future (SOMA, Alien: Isolation).  But the last decade and a half are underrepresented in scary games, and I think the reason is simple: cell phones.

The problem with cell phones is that they are lifelines back to the real world.  Hiding under a bed as a deranged killer searches the house for you?  With a cell phone you can call the cops.  Arrive at your rendezvous point only to find your confederate hasn’t shown?  With a phone you can just call them.  Wondering how to open an antique lock with a screwdriver?  If you have a cell phone you can just look that shit up on the internet.  Phones are ubiquitous and incredibly powerful ways to communicate regardless of your physical location. That power throws a giant wrench in a large number of mysteries that operate on the idea that you are isolated and must rely on your wits alone.

I mean, take The Shining.  The entire film operates on the basic premise that the roads are snowed in and nobody can get in or out of Overlook Hotel.  The protagonists are pretty lucky that one of them is a psychic because that’s how they are finally able to issue an SOS to the outside world.  If they’d had cell phones they would have noped the fuck out of there about 30 minutes into the film.

The need to isolate the protagonist is common in horror and mystery literature.  And Then There Were None, one of Agatha Christie’s most famous novels, involves ten people trapped on an island from which there is no escape. Firewatch takes place in the Wyoming wilderness in 1989 because many of the protagonists’ problems would be trivial to resolve with modern technology. 999 involves nine people trapped on a giant, trap-laden boat with no means to communicate with the outside world.  The mystery of these titles operates on the idea that the protagonists are isolated, and cell phones just chuck all that thrilling infrastructure right out the window.

Of course, there are ways to defang the portable phone. It could be out of batteries, or your protagonists could find themselves beyond the range of the closest cell tower.  But these contrivances come with a lot of conditions of their own.  I mean, you have to be pretty remote to lose a cell signal in the United States these days.

More interesting are titles that subvert the phone itself.  Ju-on, a 2002 Japanese horror flick, spends a lot of screen time proving that technology can’t save you from a killer curse.  It does this in order to isolate its victims even within their own home.  If you can’t trust the voice coming out of your phone, what can you trust?  Silent Hill: Shattered Memories actually features a cell phone as one of the game’s central mechanics.  And yet, the protagonist is still isolated: he has nobody to call, no friends or family that he can get ahold of, and he cannot trust the police.  This seems much more horrible than being trapped on an island. Shattered Memories’ Harry isn’t just alone in Silent Hill, he’s alone in his life.

Of course, the Cell Phone Problem isn’t really limited to cell phones.  Modern technology affords us all kinds of ways to circumvent the mysterious.  With the internet, GPS, digital cameras, and Google Maps, the average joe can access volumes of information on almost any topic, record his experiences in high definition, and reach out to millions with ease.  Observing authors of suspense and horror address this challenge in new and unique ways is a pleasure.

13 thoughts on “The Cell Phone Problem”