Platforms: PS2
Release Date: 2003-12-05
Regions: USA Europe
Chris’s Rating: ★★★☆
A light-hearted shooter dressed up as horror that’s more fun than it should be.

I expected Ghosthunter to be a pretty terrible game. The design of the main character was boring (goatees usually equate to angst and generic rage), the title seemed uninspired, and the back of the box made the game look like a shooter with some horror trappings. Still, some of the monster designs were fairly unique and the art looked quite nice, so I thought I’d give the game a chance.

So it was somewhat surprising to find out that Ghosthunter is actually a pretty fun game. It’s not rocket science and it’s not very scary, but you can tell that the developers put it together with a lot of care. It’s clear that this project was somebody’s baby, and though it’s got its share of flaws, the vision of that anonymous developer is enough to carry the title (most of the time, anyway). Ghosthunter is a shooter with horror trappings, but it’s done with enough skill that I was happy to play it though.

Ghosthunter is probably the best Ghostbusters game on the market. It is as if the developers wanted nothing more but to make a Ghostbusters game, but lacking the rights to the Ghostbusters brand, settled for something extraordinarily similar. The protagonist in Ghosthunter, the awkwardly-named Lazarus Jones, is clearly modeled after Peter Venkman, Bill Murray’s character in the original Ghostbusters film: he’s sort of a loser who bumbles his way through events that he is unprepared for, wisecracking all the way. The combat system involves shooting ghosts until they’ve weakened them and then capturing them with a trap so that they can be stored in a large round containment unit in the basement of an old building. It’s quite common to see developers try to model movie games after other, non-licensed titles, but it’s rarer to see a non-licensed game stick so closely to a well-known brand’s formula.

That said, Ghosthunter mostly works as a half-scary half-humorous shooter. It isn’t really the type of game to burden itself with a comprehensible plot or deep characters, but there are a large number of cut scenes and the dialog isn’t half bad. There are a few occasions where the plot makes so little sense that the game is actually harmed, including the last two hours of play (the ending is something of a disaster). But most of the time, the crazy antics of the main character and the people he meets are acceptable because of the title’s rather light-hearted approach. As with old-school games, Jones visits a variety of unrelated world that each have some sort of theme (swamp, school, junkyard, prison, etc), and in each of these places he gets the opportunity to extinguish new foes and make new jokes at their expense. The story serves to tie these events together (very loosely) and the action just good enough that the paper-thin plot is easy to ignore.

Speaking of action, Ghosthunter passes the time in two basic ways: shooting ghosts and exploring levels. The shooting system follows the Western 3rd-person-console-shooter standard: left analog stick to move the player, right analog stick to focus the crosshairs, L1 to shoot. Ghosthunter requires the player to go in and out of gun mode when shooting, causing the camera to focus on the target and preventing the player from moving quickly while firing. If you’ve played The Suffering or its ilk, you know what to expect. There are several kinds of guns to choose from, but as in many shooters like this, it’s difficult to tell which weapons are the most powerful. You will probably pick a weapon and stick with it throughout most of the game.

The shooting mechanics are pretty solid. Fighting groups of enemies that can shoot projectile attacks can be annoying because when in shooting mode your field of view is dramatically reduced. It’s also difficult to tell when enemies are invulnerable. Shooting bad guys produces health and ammo, which is cool until you run out and realize that there is no other way to acquire health or shells. I played the last several hours of the game with very little health, which was really annoying. Though this is a horror game, all the regular guns that you would expect in a shooter (the unlimited but weak handgun, the sniper rifle, the shotgun, etc) are present, and each weapon has a level where it is particularly applicable. In order to defeat enemies you must throw a trap at them (a metal disc that flies like a frisbee and sticks on ghosts), which is a nice addition but doesn’t significantly alter the strategy. Overall, the shooting system in Ghosthunter is pretty good, if extremely run-of-the-mill.

Other than shooting, a lot of time in Ghosthunter is spent exploring levels. Most levels in the game are linear affairs with a small amount of back tracking and a few simple puzzles. The puzzles themselves range from easy-and-fun to annoyingly-obfuscated (more on that in a bit), but they serve as a nice change of pace between heavy action sequences. One of the coolest ideas in Ghosthunter is the Astral mechanic: in certain levels, Jones is able to summon Astral, a ghostly woman who has somehow bound herself to his being. As Astral, the player can fly through the air, under water, and into other places that would be unreachable on foot. Astral has a few skills that allow her to influence the world, such as opening doors and throwing switches, and these abilities are used to create traversal puzzles. The Astral sections are great because they give the player a rest from shooting and allow him to explore the environment in detail.

The levels themselves in Ghosthunter are extremely well-realized. This game has every whiz-bang graphics feature ever, from inverse kinematics on Jones’s legs to environment mapped water to shadows and particle effects. And if you don’t know what any of those things are, you will hardly notice them at all. Suffice to say that the game looks pretty good and some of the artwork, especially the level and character artwork, is of very high quality. The art style lends itself to characters that are slightly more cartoonish than you might expect, but that in turn keeps the art looking fresh and interesting. There were several times during the game when I stopped and looked around at the scenery because it was just so damn cool.

The monsters are also pretty cool. Being a Ghostbusters clone, Ghosthunter has chosen to make almost all of its antagonists ghosts, and then make them look like whatever crazy manifestation they like. The results are pretty good: the game plays host to some of the most original and interesting enemy designs I’ve seen in a long while. One of my favorite enemies is a girl who carries a teddy bear before changing into a giant, deformed teddy bear that carries the husk of the girl around. A few of the enemies are pretty lame (the ghost cops and the sniper dudes must have been done by the intern), and a couple of the monsters are damaged by the need to be transparent, but most of the enemies in Ghosthunter are very well designed and animated. I’d say that along with the level art, the monster designs are one of the strongest parts of this game.

Where Ghosthunter breaks down is in the area of player communication. Far too often I found myself in a large area with nothing to do and nowhere else to go. Too many times the solution to a puzzle seemed obvious but proved difficult because of some implementation glitch. There were many, many places where a checkpoint occurs before a long, unskippable cut scene that leads into a difficult, multi-stage boss fight. There are a lot of points in the game where only one action can be performed to progress and that action isn’t obvious at all. Furthermore, the levels get worse as the game wears on, and the last few levels are a disaster of unfocused goals, sprawling, open-ended levels, and miscommunicated rules (it’s pretty clear that the development team ran out of time, as these levels lack the level of polish found earlier in the game). Though I expect all games to have a few points of frustration like this, Ghosthunter had way more than its fair share.

Another knock against the game is that the controls are too complicated. After putting the game down for a week, I would constantly have to go back to the manual to remind myself of how to use the goggles, how to turn on the flashlight, or even how to switch weapons. The context-sensitive action button seems like a good idea, but it loses a lot of its power because every single wall in the game pops up an icon letting the player know that if they push action they can hug the wall. Not only is the wall hug an entirely useless move, the constant appearance of the action button makes it difficult to tell when other, useful actions might show up while traversing the level.

Finally, there’s just nothing going on in the Ghosthunter levels. The levels are so well modeled and textured that I had a great urge to explore them in detail, but I was disappointed to find nothing at all off the main path. There are quite a number of areas that can be safely skipped, but if you enjoy exploring and wish to visit them, you’ll find that there’s really nothing to be found. Game content only exists along the main play path, and stepping off the track means that you’ll be wandering around in a well-crafted but barren landscape.

Ghosthunter is a better game than I was expecting, but it’s still not anything that is going to change the world any time soon. I found it to be a solid shooter with extremely nice art, high quality monster designs, and a few too many frustrating moments. It makes a pretty decent stab at humor and thankfully doesn’t take itself too seriously, and it doesn’t suffer from rookie mistakes or bugs. It is also clear that Ghosthunter is the result of somebody’s vision, and it’s is kind of neat to see that vision carried to its conclusion. With all of its flaws and successes, Ghosthunter turns out to be a very by-the-books third person shooter with the occasional surprise. 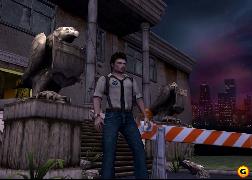 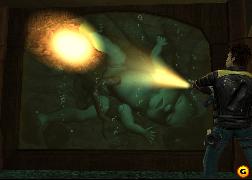 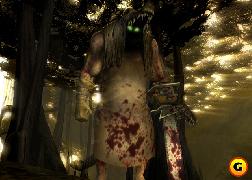 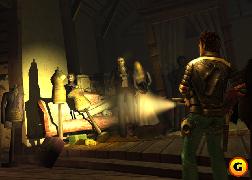 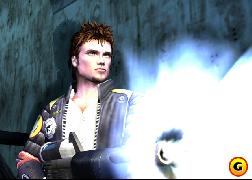 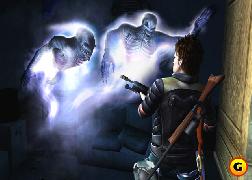 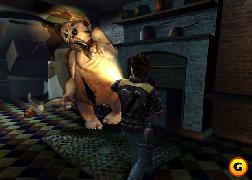