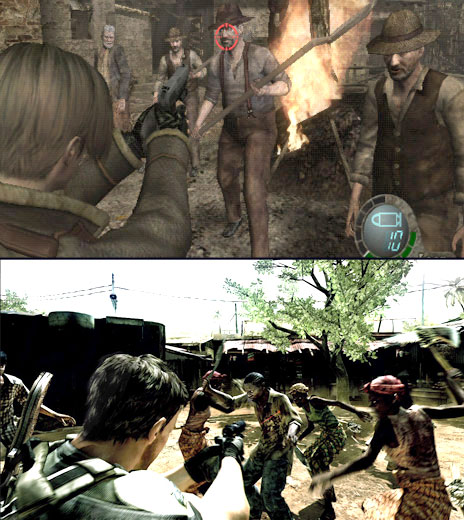 Only one of these scenes is controversial.

I’ve been thinking for a while about how best to address the controversy surrounding the recently-released Resident Evil 5 trailer. The trailer, which depicts Chris Redfield (a white male) shooting black zombies in what appears to be Africa, has raised more than a few eyebrows. Kim Platt is one of many people who find the trailer disgustingly racist, and you can read her thoughts on the matter at her blog Black Looks. Racism is such an inflammatory topic here in America that I’ve thought pretty long and hard about how best to discuss this matter here without the debate degrading into personal attacks. I think that the problems that this country has with racism and bigotry are extremely important to discuss, but the internet has proven to be full of really offensive people, so I hesitated before posting this. Still, it’s such an important topic that I don’t think I can really ignore it.

Briefly, I want to describe the criticism against the trailer as I understand it. As Platt puts it, the trailer is “problematic on so many levels, including the depiction of Black people as inhuman savages, the killing of Black people by a white man in military clothing, and the fact that this video game is marketed to children and young adults.” I’m going to set aside the “marketed to children and young adults” part of her complaint for the moment, as it’s a common stereotype that many non-gamers hold and doesn’t really pertain to the real discussion here. Platt is echoing the reactions that many people have when they see the Resident Evil 5 trailer: a white guy shooting mindless black dudes is not socially acceptable in American society.

There are a few things I want to say about this controversy. We have had a pretty interesting discussion about this on the forum, and I want to sort of collapse my rambling posts from that thread into something more coherent here.

The first thing I want to talk about is culture clash. When I first moved to Japan in the late 1990s, I slowly experienced the sensation known as culture shock. In my case, it was a feeling of being perpetually off-balance, and it was caused by curious juxtapositions or behaviors of people in Japan that I couldn’t quite explain. I made the mistake most people make when they visit a foreign country: I mistook superficial similarities in my own culture and the Japanese culture as proof that the people in Japan operate pretty much the same as people in America. I saw neat buildings and neon lights and people going to work every day and figured that Japan was pretty much like America except that they drive on the other side of the street. Culture shock began to take hold as I realized that while Japanese people do many of the same things Americans do, they don’t necessarily do them for the same reasons. The critical mistake I had made was the assumption that I could look upon some superficial Japanese thing or event and somehow divine what the motivation behind it was. I can do this in America, but I eventually realized that I can’t do it with any level of reliability in Japan.

Since then I’ve become a lot more conscious about how things I consider to be “common sense” may not actually be all that common outside of my home country. And that is why I don’t believe that the people who made the Resident Evil 5 trailer are trying to be racist, even unconsciously. It’s true that depicting a white man shooting African villagers is unacceptable in American society, but this video isn’t the product of American people. America has a terrible history of racism, slavery, and subjugation, and our continued struggle with these issues as a culture is reflected in this controversy: clearly, the video invokes images that remind people of a not-so-distant past where this sort of thing may have happened not to zombies, but to real, living people. But the people who made the game that this video comes from have none of that history; Japan has its own set of problems with racism and xenophobia, but they are not the same shape as America’s.

I think that people like Platt find the trailer so disgusting because they assume that anybody with common sense would understand that these sorts of images are bound to offend, and therefore they conclude that the people who made the video must be intentionally trying to offend–it seems like unabashed racism. But I think Platt has made the same mistake I did back in Japan: she assumes to understand Capcom’s intent because she assumes that the cultural signals she is receiving are the same ones that were intended to be sent. But this isn’t necessarily true; when dealing with a different culture, I don’t think you can make any assumptions about what “common sense” is. And if you don’t understand the motivation behind the work, I don’t think you can justify the extremely serious allegation of racism.

Please note that I’m not trying to argue that the RE5 trailer isn’t offensive. People take offense at things based on their personal sensibilities, and I’m not about to tell anybody that they are wrong to be offended by anything. It’s your personal prerogative to be offended about whatever you want. And frankly, I do understand what Platt is talking about; the trailer does invoke images that make me uncomfortable, but because I don’t really know what the creators of the trailer are thinking, I think that discomfort says more about me and my culture than it does about them.

I also think it is fair to fault Capcom for not being more sensitive to their target audience. They should have anticipated this sort of response, and while I don’t think it’s fair to call them racist, I do think that the label of insensitive and clumsy is appropriate. Resident Evil is not their only problem either: they recently removed an Islamic phrase (link requires Gamasutra account) from one of their other games after they received complains from Muslims. But I think that there is a huge difference between racism–the purposeful propagation of a negative or dehumanizing stereotype–and inadvertently offending people because of cultural insensitivity.

I also want to talk very briefly about the trailer itself. I want to note that this entire controversy is based on about 30 seconds of footage from a game that we know nothing about and that isn’t scheduled for release until 2009. I also think that people too quickly overlook the content of the game itself. While it might seem like shooting zombies is a pretty straight-forward video game premise, it is worth remembering that Night of the Living Dead, the film that spawned the zombie genre as we know it today, is a pretty damning commentary on race relations in America. Given how little we know about Resident Evil 5, I think it’s a bit premature to make judgments about it, especially considering the roots of the zombie genre.

One last point to make here. After Kim Platt wrote about her reaction to the Resident Evil 5 footage, her blog became the target of angry gamers who left a barrage of extremely offensive comments. To the people who posted those comments: you are the problem with this country. It’s not video games that perpetuate racism, it’s assholes like you! People like you give the rest of us gamers a bad name, and you are actively contributing to one of the central problems in America today. What century do you think this is? Shame on you.