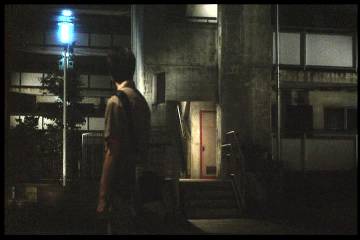 I have no clue what is going on in Pulse, but it’s awesome.

My wife and I (and our brand-new daughter, though she wasn’t yet born at the time) moved to a new neighborhood this year. For the first time in almost a decade, I think we’ll be living in a place that actually has kids going out to Trick or Treat the neighborhood. Some of our neighbors have gone all out–one guy has created an entire cemetery in his front yard, while another has rigged some sort of contraption to make a life-sized model of Death hang menacingly over his front door. The leaves have turned color and are quickly migrating to the ground, and the TV stations are running films from every 80’s horror series that they are able to edit into politically correct submission. I love this time of year, both because it’s fall, the weather is nice, and the foliage is beautiful, but also because Halloween is a holiday where we celebrate our enjoyment at scaring ourselves. Unlike most of the other holidays, Halloween in America is an exercise in honoring horror–an emotion otherwise thought to be negative or mind-warping–as a basic form of human entertainment. Despite all the gaudy plastic pumpkins and marketing blitzes that define the holiday for many, I think that at its core Halloween is an admission that scary stuff is something that everybody can enjoy.

I have a couple of recommendations for this year’s Halloween. First, you could mull over the announcement that Capcom is making a Resident Evil CG movie. If that’s not enough for you, you could go rent yourself some quality horror films–none of this sanitized-for-television garbage, but the real, genuine article. I’ve recommend Pulse (the origin of this neat shot on the left), Session 9, The Descent, and Don’t Look Now in the past, and I would like to reiterate my approval of these films. Or, you could check out this fascinating (if somewhat informal) book about Japanese horror films. I’m about half way through it myself and will be posting a full review when I’m done, but so far it’s been pretty good. Finally, you could play some Call of Cthulhu: Dark Corners of the Earth, which I found mostly satisfactory until the shooting bits started, but I can still recommend it to fans of the genre (which, if you are reading this site, you clearly are).

Anyway, I have to go buy some candy and get myself a mask or something. I’m totally unprepared for all the kids that are going to be knocking at my door in a few short hours. Trick or treat!