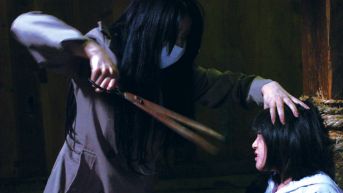 I’m sure she’s just planning to trim those bangs back.

This evening I watched Kuchisake Onna, a film made this year about the slit-mouthed antagonist of a Japanese urban legend I’ve discussed before. Actually, the film is built around the very general idea of a scary woman with a slashed mouth and surgical mask who hunts children–the other details of the legend are completely ignored. But that’s ok, because the filmmakers actually did a pretty good job on Kuchisake Onna’s design: when she shows up, you know exactly what to expect from her.

The story, such as it is, involves a series of children vanishing from the streets in broad daylight. Rumor has it that they are victims of Kuchisake Onna, who has been released from imprisonment by a recent earthquake. Turns out the rumors are right: Kuchisake Onna is on the loose and has a bone to pick with just about everybody under the age of 11 (and any adults who happen to get in her way). The protagonist, a teacher at a local school who’s students are among the victims, must track Kuchisake Onna down and stop her from taking any more children. She’s aided by another teacher, who helpfully can hear a strange voice whenever Kuchisake Onna is about to strike. Together they must solve the mystery–blah blah, you know the rest.

As a movie, Kuchisake Onna is unfortunately pretty bad. It’s not cringe-worthy bad, but there’s very little to redeem it; the acting is pretty terrible, the script is atrocious, and the plot is both full of holes and entirely predictable. But it’s not a total train wreck: some of the photography is pretty good (though there are a few really noticeably bad cuts) and I liked the way the director used color filters to code different locations in the movie. The pacing is pretty weird: the movie just starts, with no introduction, and within the first few minutes we’ve already seen Kuchisake Onna take her first victim; there’s no build-up and consequently very little arc to the overall story. The ending, unfortunately, is pretty lame, as is the application of some not-so-tricky wordplay late in the film to connect the story with the legend upon which

One thing I did like about the film is the way the antagonist, Kuchisake Onna herself, is portrayed. She shows up whenever she pleases, even in the middle of the day on a sunny street. There’s no need to wait for darkness or to explore the haunted mansion with flashlights at night (though that happens too–sigh), Kuchisake Onna is bad-ass enough to appear right in the middle of the day to grab children.

I also like the way the Kuchisake Onna looks: she is tall, has long hair, a surgical mask, and carries around some incredibly large shears. Actually, now that I think about it, I think her design was taken pretty much directly from the antagonist of Minetaro Mochizuki’s excellent horror comic Zashiki Onna. I’ve thought many times about translating Zashiki Onna (“Tatami Room Woman”) into English, as it’s such an awesome and well-written horror comic. At any rate, the design of Kuchisake Onna matches Mochizuki’s antagonist almost perfectly. That’s cool though–the design works, and it’s one of the best things about the movie.

The other, somewhat interesting (for aficionados, anyway) thing about the film is that it follows the modern Japanese horror film tradition of being about broken families. In this film, the subject is child abuse. As David Kalat points out in his fascinating book, non-nuclear family relationships are one of the core themes of modern (post-Ring) Japanese horror films. The thing is, nothing else about Kuchisake Onna really aligns to “J-Horror” (a term I abhor) conventions; it’s much more like a formulaic Hollywood slasher flick, with a heavy emphasis on body count and gore and no attempt at the subtlety favored by the recent classics of the genre. I wonder if the broken home theme was chosen because it fit the story (which it actually does) or simply to be like other modern Japanese horror films.

In any case, Kuchisake Onna is a pretty mediocre horror film that I think you are probably better off avoiding.

3 thoughts on “Kuchisake Onna: The Movie: The Review”