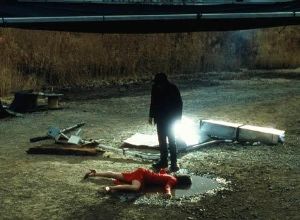 The other evening I watched Kiyoshi Kurosawa’s latest, a film called Retribution (sakebi, or “Scream,” in Japanese). You may remember that I am a pretty big Kurosawa fan; his film Cure is one of my favorite horror films of all time. The others of his that I’ve seen, Doppelganger, Pulse, Charisma, and Seance, are also excellent, though they are not as absolutely inspired as Cure. Kurosawa is good at using long, wide shots that go on for seemingly forever to convey the emotions of the protagonist (which, in his films, is usually isolation and despair). Kurosawa is a horror film director who actively avoids simple plots and cliche devices in his films; there is a subtly and sense of careful measurement in everything that he makes.

Retribution is no exception. The film revolves around a police detective working on a murder case and slowly realizing that the perpetrator is probably himself. It is a fatalistic film, very similar in tone to Kurosawa’s earlier Pulse, with a few little details from Cure thrown in as well. Kurosawa has something to say about Japanese society, something about the bleak isolation that Japan’s constant development and focus on the future creates. When the protagonist detective (played by Koji Yakusho, just like in every other Kurosawa movie) begins to see the victim of the crime he may have committed in his apartment, the effect is less ghostly than it is desperate. The visions that haunt him seem like pretty standard horror stuff early on, but by the end of the film the dead girl is something other than a run-of-the-mill vengeful spirit. The feeling of desolation and poverty within the world’s second richest nation is reinforced by the locales and sets that Kurosawa employes. Everything throughout the film is decrepit, dirty, and old, even locations that we might normally associate with modern society, like the police station. Recurring earthquakes and endless shots on reclaimed land also remind the viewer that the foundations upon which modern Japanese society is built are not necessarily stable.

Retribution has its flaws (well described in this extremely detailed, very well thought-out review of the film), and I enjoyed it slightly less than Kurosawa’s previous works, but that said I still thought it was pretty great. This kind of film cannot be made in America (not by a major production company, anyway), and I am thankful that we have guys like Kurosawa around to make it.