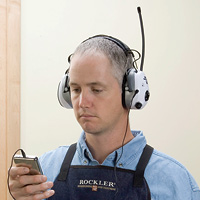 The height of cool.

The setup: I have a newborn who sleeps every evening by 9 PM. I enjoy horror games and films, but my wife isn’t such a fan. I have one of those TVs where the volume goes from “inaudibly quiet” to “loud enough to wake the house up” in a single click. I’d like to stay up late and indulge in my games and movies after my family has gone to sleep, but so far I’ve had to either turn the sound off entirely or sit about two feet away from the TV.

I need a pair of headphones. But not regular headphones; my TV is large enough that I need to sit several feet back to enjoy it. No, I need wireless headphones. I bought a pair of wireless headphones a couple of years ago in Japan, and while they were super-cheap and rarely worked correctly, they sold me on the idea that slightly better technology could make wireless horror viewing a reality.

So I started to shop around. It turns out that there are four types of wireless headphones available: radio frequency headphones (the worst; you get interference from the local hip hop station), 900mhz frequency headphones (probably fine if you don’t have a lot of 900mhz interference; I do), infrared headphones (sound is good but they require line-of-sight to a base station), and Bluetooth headphones (sound is good but they are super expensive). The price range for these things goes from about $15 for the radio headphones to $200+ for Bluetooth, which also requires you to buy a Bluetooth transmitter if you want to use your ‘phones with the TV.

None of these things sound like very good options to me. I don’t want to spend $200 for some headphones that I’m only going to use once a week, but on the other hand I can’t abide by lousy sound quality. The cheapest Bluetooth setup is slightly more affordable but doesn’t come with big ear pads, which I also desire.

So I decided to go with the IR headphones. Line-of-sight isn’t a problem for me, as I’m just going to wear them in front of the TV. They are pretty cheap and the reviews on Amazon suggest that the sound quality is pretty good. I went with a pair of Sony headphones that retail at a very-affordable $50. The way these things work is that the base is connected to the TV, and it beams the audio via infrared to receivers on the headphones themselves. I have to push my hair back when I wear them to make sure that it doesn’t obscure the receivers, but otherwise they feel pretty good on my head. They rest on the base station when not in use and automatically recharge, which is nice. And actually, the sound quality isn’t half-bad.

That is, unfortunately, until I turn on the TV. A key miscalculation on my part is that I have a plasma TV, which emits infrared light. I knew this to be the case before I bought the headphones, but I didn’t make the connection between an IR-producing TV and IR-receiving headphones. The result is a significant amount of background static, which annoyingly changes depending on what’s currently displayed on the screen (scenes with lots of white are louder). It’s acceptable, I guess, but the sound quality is degraded so much that I might have just been better off with a 900mhz model. It sounds better for games than for films, probably because the games I play are generally darker. But my plan to enjoy horror wirelessly was fatally flawed by my brand of television.

As an aside, last night I used my new headphones to sit through Exte, a Japanese horror flick about, well, hair extensions. Mostly this movie operates on the idea that other people’s hair is pretty icky to touch when it’s not attached to their head; we get hair coming out of people’s mouthes, out of their eyes, and even out of cuts in their skin. But the premise is terrible and the film can’t decide if it wants to be funny-and-campy or serious-and-scary. In the end it’s a pretty complete failure in every department. Also, it sounded bad through my stupid headphones.

5 thoughts on “My Quest to Find Affordable Wireless Headphones”