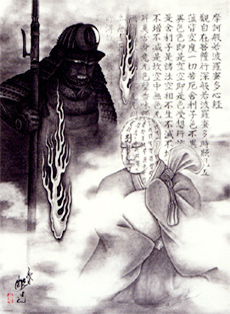 Unlike previous Creature Features, Earless Hoichi is not actually a creature. In fact, he’s the unfortunate victim of a long-dead military clan. The story of Earless Hoichi (耳なし芳ー, literally “Hoichi without ears”) is a classic Japanese ghost story, and is required reading for anybody interested in understanding Japanese horror.

You can read the story of Earless Hoichi for free online, or you could buy a copy of Lafcadio Hearn’s fantastic Kwaidan. I’ll present a short summary of the tale here, but I highly recommend that you read the original.

Hoichi is a player of the biwa, a kind of Japanese lute. He is a fantastic player, one of the best in the country, but unknown and poor. Hoichi is also unfortunate enough to be blind. Having no home, he seeks refuge in a temple (Amidaji, which still exists today as Akama Shrine), where a friend of his resides as a priest. One night while sleeping at the temple, Hoichi is approached by a gruff samurai who insists that he play for the samurai’s master. Even though it is the middle of the night, Hoichi follows the samurai to a secluded area that seems to be filled with people talking in hushed voices. He is asked to play a rendition of the Tale of the Heike, a story at which he is particularly skilled. His performance is so astonishing that his audience is moved to tears. On the way back to the temple the samurai tells Hoichi not to speak of the event, as his master is traveling incognito.

Hoichi is visited by the samurai the next night, and the night after that. The priest of Amidaji notices Hoichi’s absence, and has some of his servants follow the lute player the following evening. What they see astounds them; Hoichi appears to stand up in the middle of the night and walk briskly out of the temple. His speed is unbelievable for a blind man, and eventually they find him playing his lute furiously in the middle of a deserted graveyard. When they drag him back to the temple, Hoichi relates the story of the samurai and his secret master to the priest.

Realizing Hoichi has been bewitched by ghosts, the priest vows to save his friend from further torment. He paints Hoichi’s body with the text of a holy sutra to protect him from the ghostly samurai. The priest also instructs Hoichi to remain motionless at all times; any sound or movement, and the spell will be broken. That night the samurai calls for Hoichi as usual, but Hoichi is nowhere to be found. In his place, the samurai finds only a pair of floating ears. Though the sutra has rendered Hoichi’s body invisible to the ghost, the priest has neglected to paint 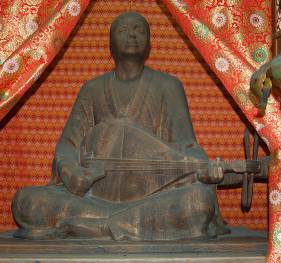 A statue of Hoichi at Akama Shrine

the characters on Hoichi’s ears, making them visible. The samurai, attempting to comply with his order to retain Hoichi to the furthest extent possible, rips Hoichi’s ears off and leaves with them. Though he is scared out of his wits and bleeding profusely, Hoichi does not dare move or make any sound until the priest finds him some time later.

Though Hoichi loses both of his ears, the priest’s spell is effective at freeing him from the clutches of the dead clan. He is thereafter never bothered by ghosts again, and goes on to become a famous lute player.

The story of Earless Hoichi is important because it is widely known. It is also interesting because embedded within it is another widely known story, the Tale of the Heike, which is based on real events. To understand the significance of some of the details of this story, it’s good to have a little background.

In the 12th century, the rival Minamoto and Taira clans had an extended conflict called the Genpei War. The final battle in that war is called The Battle of Dan-no-ura, which ended in victory for the Minamoto clan, giving them control of Japan. Dan-no-ura was a navel battle, and when the Taira elite realized that victory was impossible, most of them (including the six year old Emperor Antoku) chose to jump into the sea rather than face defeat. The word Heike means “Taira clan” (“hei” is the alternate reading for “taira”), and the Tale of the Heike chronicles the conflict and eventual demise of the Taira.

The decisive Battle of Dan-no-ura took place in the straits of Shimonoseki, which is where Amidaji is located. During the Meiji Restoration shinto became the state religion, and at that time the Buddhist temple of Amidaji was converted into a shinto shrine. The temple was probably originally constructed in memory of the child Emperor Antoku and the others of his clan who drowned themselves; today it also pays tribute to Hoichi.

Considering the location of Hoichi’s story and the specific reference to the Tale of Heike, I think it is safe to assume that Hoichi’s ghostly assailants are indeed members of the dead Taira clan. Thus their interest in Hoichi’s ability to recount the sad story of their demise is easily understood. This story is a classic Japanese ghost story in many respects, but I think the most telling theme is that of intense sadness: the Taira who died in the Battle of Dan-no-ura feel so strongly about their end that their emotion is able to reach out from beyond the grave and interfere with the real world, even though the Minamoto, their enemies in life, are long dead.