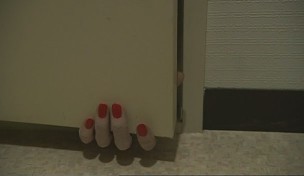 A couple of weeks ago I was browsing the film section of my local Japanese bookstore when I came across a box set of four discs called Tales of Terror From Tokyo and All Over Japan. Now, to tell you the truth, the set looked like utter schlock. In addition to the awkward title and terrible cover art, the distribution company responsible for the series is a group called “Tokyo Shock.” There’s no useful information on the back of the box and the whole thing was selling for $30 for all four discs (most of the other films at this store go for $30 each). It looked like a very blatant attempt to ride the post Ring wave of interest in Japanese horror films; I could tell right there in the bookstore that this Tokyo Shock group got the rights to whatever they could in Japan and released it here in hopes of making a quick buck.

I bought it. I mean, four discs for $30 is a steal, and I figured that even if it was utter crap I could peruse it for funny screen captures for blog posts. And the back of the box said something about “over 60 episodes,” so I figured they can’t all be bad, right? Plus I recognized some of the director’s names that were listed on the back of the box, and some of them have been responsible for films that weren’t half bad. So I said to myself, “what the heck.”

That was about four weeks ago, and I’m just getting around to watching the damn thing now. I’ve only watched the first disc so far, but I am happy to report that I am so far pleasantly surprised by the set. As I imagined, Tokyo Shock has snagged whatever horror-related material they could and reissued it here in the states. It turns out, however, that the material they were able to grab isn’t all that bad. The series is from a TV show called Kaidan Shin Mimibukuro (怪談新耳袋), which started running in Japan in 2003 (meaning that the show itself was probably an attempt to ride the Ring boom to profitability). What’s really cool about the show is that each episode is really, really short: five minutes at the most. This means that the directors have a very little amount of time to set up a scene, introduce characters, and then get to the scary bits. The results are definitely mixed, and the acting is pretty mediocre across the board, but I found many of the episodes to be quite good. The episodes that keep things simple are the most effective; those that try to be a regular film in a five-minute timeframe are less stellar. And some of the stories are just sort of nonsensical rather than scary.

Each episode is a self-contained story. The format resembles an earlier Japanese TV show, Yonimo Kimyouna Monogatari (世にも奇妙な物語), which was sort of a modern-day version of The Twilight Zone when it aired throughout the 1990s. The biggest difference is the Shin Mimibukuro’s five-minute format, which is what I think saves the series from being bad. The stories themselves are often just scenes: an elevator is headed down but it’s already on the ground floor; somebody is at the door and they sure don’t sound like your Aunt; something is wrong with your sister’s new apartment; your childhood diary warns you of a cheating lover. But that’s what makes the series fun–the episodes that are well executed just examine one particular scene and then end; they don’t have time to get bogged down and start sucking.

Anyway, I was surprised to find the first volume of this series as interesting as it was. Hopefully the rest of the set will be good as well. If you like this sort of thing and see this set for cheap, I think it’s a worthy purchase.

3 thoughts on “Tales of Terror from Tokyo”