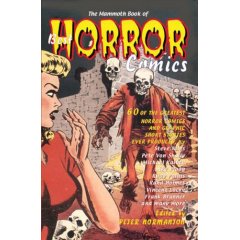 I recently purchased The Mammoth Book of Best Horror Comics, a collection of horror comics spanning the era before and after the Comics Code Authority was instated in 1954. Though I enjoy comics (as a kid I had a pretty good collection), I’ve kind of fallen out of sync with the comics world. I have friends and family who occasionally direct something fantastic my way, and I’m really interested in the medium, but this collection was the first comic material that I’ve purchased in about ten years (although I recently enjoyed and can highly recommend Jason Shiga’s online stuff, particularly Meanwhile, Fleep, and Bookhunter). I decided to pick up the Mammoth Book because I also just bought The Ten-Cent Plague: The Great Comic-Book Scare and How It Changed America and I wanted to do some brushing up on the works that caused the Comics Code Authority to be created in the first place. I think that the fear and uncomfortableness that the older generation sometimes feels about video games today very much mirrors the way that horror comics were viewed in the 1950s, so in the interest in understanding the present better, this stuff seems like pertinent knowledge.

I guess some people on Amazon were disappointed that The Mammoth Book of Best Horror Comics isn’t a full-color reproduction, but for $12 I can’t complain. The collection is filled with mostly obscure horror comics–48 in all–published between 1944 and 2004. About half of the comics are from the ’40s and ’50s, which is good because frankly, many of the later works are pretty dull. Nothing in the Mammoth Book is famous; there are no prints of well-known EC comics like Tales from the Crypt. I think that the book is a collection of whatever random works that the publishers were able to obtain the rights to for little or no cost; those looking for a collection of the most famous (and most controversial) horror comics from the last half-century will be disappointed. Each comic is introduced by the book’s editor, Peter Normanton, and describes the authors of the comic and the era in which it was published. Though Normanton clearly knows his stuff, his command of the English language is tenuous at best; after a couple of really annoyingly bad introductions, I skipped the rest and just stuck to the comics.

Despite its faults, the Mammoth Book does contain some really good comics. It’s fascinating to see the dramatic change in style and approach before and after the Comics Code; in some cases, the censorship seems to have actually improved the writing because authors were forced to use suggestion rather than all-out gore. The Monster of Dead End, which was published in 1962, is an excellent example of effective comic horror that doesn’t rely on melting faces or decapitations to get its point across. I also found it interesting that the tone of the earlier comics is much more depressing; though evil-doers often get what is coming to them, the endings of many of the 1950s era works are not uplifting or satisfying. The later books tend to play up the “you will reap what you have sown” approach to storytelling, where everything works itself out because all of the bad people have died and all of the good people have triumphed, but before the Comics Code Authority things didn’t always end quite so neatly. Though more recent tales like Over His Head (1983) began to experiment again with rather unpredictable stories, the dramatic difference between the 1950s and 1960s comics is really interesting.

So, while this is hardly a collection of the “best” horror comics, or even the most well-known horror comics, I enjoyed most of The Mammoth Book of Best Horror Comics. If you skip the introductions and stick to the comics and I think that collection is a really interesting example of how the medium progressed in terms of story telling technique and art style in the face of cultural fear and censorship. It’s hardly a definitive work, but as a (rather random) sampling of horror comics from the last fifty years, it’s not half-bad.

9 thoughts on “The Mammoth Book of Best Horror Comics”