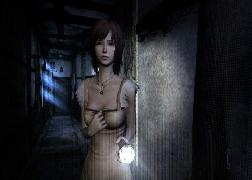 … which isn’t a bad thing. I’m of the opinion that if you don’t mind the slow pace and the unique combat system, the Fatal Frame series is probably the single most consistently frightening series out there. Fatal Frame 4: Mask of the Lunar Eclipse was the first game I purchased when I bought a Japanese Wii (making it my second Wii and fifth game machine connected to my TV–region locking can kiss my ass), but I haven’t been able to play it much because my wife refuses to be in the room when the game is on. Even when I play with headphones, the visuals are effective enough that she wonders if she’ll be able to sleep.

To tell you the truth, I was not expecting FF4 to be all that great. The chatter on the web about the game when it came out was that it was not sufficiently Wii-ified, that it was a poor port from the PS2 engine, and that it was generally a weak horror game. And the publisher decision not to export the game outside of Japan seemed to back up those concerns. I’ve played about two hours of the game now and some of the impressions I read on the net are sort of true: there are a few technical problems (loading of rooms seems to be way slower now than it used to be, there are noticeable drops in the frame rate when passing from one room to the next, etc) and using the Wiimote to aim is taking some getting used to. So maybe, I thought at first, the game isn’t all it’s cracked up to be.

But the thing is, this is a classic Fatal Frame game through and through. The art style, the sounds, the ghosts, the menu UI, the particulars of the story–all of core components of this game are right in line with the rest of the series. And the game looks pretty great; other the occasional drop in frame rate there’s nothing to complain about here on the graphics front.

What is most interesting to me is the ways the game has changed from its predecessors. Some of the changes are very subtle, while others are a little more dramatic. The controls, for example, have been modified to match the Wiimote: the thumb stick on the Wii Nunchuck drives the character around and the wiimote is used to look up and down. 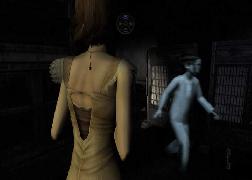 The camera is placed pretty low.

I haven’t quite gotten the hang of this yet–it’s hard for me to remember to tilt my hand down to aim downwards when fighting ghosts, for example–but I think that phase will pass. It’s also now necessary to hold the A button down for a while to pick up objects; the protagonist bends down and slowly reaches her hand out before grasping the item. I am sure by the time the game is done there will be at least one moment where a ghostly white hand shoots out and grabs her hand in mid reach, causing my heart to stop (D2 did something similar with trivial action cut scenes). There’s also a neat “item filament” bar that glows blue when items are near (and some of them do not appear until you get close enough to grab them), which makes ransacking areas for items a lot less tedious.

A much more subtle and (now that I think about it) major change is the way that the camera works. Previous FF games have been one of the last holdouts on character-centric “tank” controls (though the series made a few neat changes), probably because character-centric controls enabled the series to have some of the most interesting and complicated camera shots that I’ve seen. Fatal Frame 4, on the other hand, has opted for a behind-the-character camera view. The camera sits much lower than in most other 3rd person games–the protagonist takes up a large portion of the screen. If anything, it’s most similar to the camera system in Resident Evil 4, though pulled back from the character a bit. Like I said, the change is subtle; despite having played all of the other Fatal Frame games to completion, I didn’t notice this particular difference right away. I’m also not sure what the goal of this change is; it probably is an attempt to get away from tank controls, but I’m not sure if it was necessitated by the single-stick Wii controller or if it’s a nod to RE4 and its brethren.

Anyway, I’ve only just started to play and the game is sufficiently freaky that I will probably play in short bursts. But so far my impressions of the core game mechanics and the engine it is built on are very positive. All that remains to be seen is whether or not the game content will live up to its potential.

17 thoughts on “Fatal Frame 4 is pretty much like all the others.”