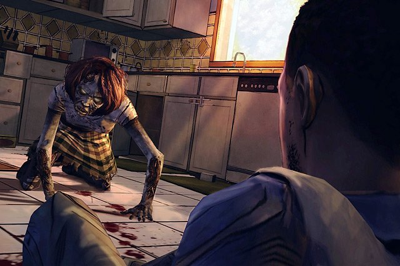 A couple of years ago my brother, a comic fanatic (and indie comic artist/author/publisher), gave me a copy of The Walking Dead for my birthday. A few years later he gave me a DVD of the first season of the show based on that comic. And that is why, when I read that Telltale had released a Walking Dead episodic game on Xbox Live (as well as PSN, iOS, and PC/Mac), I made a mad dash for my television.

I wasn’t disappointed. The Walking Dead game is fantastic–it’s one of the best adventure games I’ve played in a very long time. The interface is simple but effective, the tried-and-true adventure game play fits the needs of the story well, and the writing is absolutely top-notch. It’s not easy to make a game like this today; somebody at Telltale has a deep understanding of how adventure games work and why they are still viable in the market, despite the failure of the genre over a decade ago. It is exactly the right game for this series, I think: no other genre could have hit the emotional notes that are the series’ signature as well as this one does.

And yet, although it concerns a small group of people attempting to survive a zombie apocalypse, with all of the dramatic zombie attacks and bloody dismemberment that you might expect, The Walking Dead is not a horror game. At least, not by Noel Carroll’s standards. In his seminal text on horror, A Philosophy of Horror: Or, Paradoxes of the Heart, Carroll meticulously argues for the existence of “art-horror,” the emotion we feel when consuming works of horror (I wrote about Carroll’s ideas earlier this year). Art-horror has specific requirements that set it apart from related genres like suspense and mystery. One requirement is that a monster be involved. Another is that said monster must be plausible, dangerous, and disgusting, a role that the sauntering deceased for which the game is named clearly fulfill. But even considering the zombies, obvious horror tropes that they are, The Walking Dead fails some of Carroll’s other requirements for horror.

One of Carroll’s most insightful requirements is that the monsters of art-horror be “extraordinary.” That is, they must be something that isn’t expected, that surprises the protagonists, that isn’t a normal element of the world. This is in contrast to fantasy, in which monsters or other crazy beings are “normal” because the setting itself is extraordinary. Finding a troll in your back yard is a lot more surprising than finding one in Narnia. This “extraordinary being in an ordinary world” definition allows Carroll to cleanly separate works of horror from works of fantasy, even though both contain monsters that fit his other prerequisites.

The zombies in The Walking Dead, however, are not extraordinary. They are dangerous, sure, but they have become 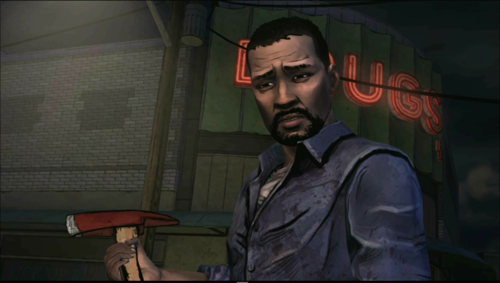 a fact of life for the main characters. The protagonists now live in a changed world; the new normal is a world in which the dead shuffle about looking for anything living to eat. Lee, the protagonist, is not surprised to see zombies. He encounters them, and kills them, regularly. Though they were initially weird, with time and exposure they have become ordinary. The world that these zombies inhabit, and how the protagonists react to that world, is The Walking Dead’s principal concern. Per Carroll’s requirements, this means that The Walking Dead isn’t going for art-horror.

Which, actually, you don’t need to read Carroll to understand. The Walking Dead has some intense scenes, but it’s not scary. It’s not trying to be scary. Carroll writes about how the emotions of characters in art-horror works ideally run parallel to those of the audience, but the characters in The Walking Dead are rarely scared. There’s no hiding in the corner or sobbing in a dark room for these grizzled veterans. They are competent, aware of their surroundings, and paranoid. They are angry, political, and scheming. And though they experience moments of vulnerability, the game doesn’t go out of its way to communicate how scared they are, because it’s not really going for scares. It’s got its eye on something else.

The real genius of The Walking Dead is that it forces you, the player, to step into the shoes of the protagonists and make hard decisions posed by the harsh world around them. The central question it is asking, I think, is whether or not you can maintain your humanity in the face of disaster. Do you act consistently when presented with the same problem in different contexts? How far will your moral compass sway when you are caught between starving, getting stabbed in the back as you sleep, or becoming food for some shambling corpse? Your decisions can’t be taken lightly, as they affect the way the rest of the game plays out.

My Lee is trying very hard to retain his humanity, to remain civilized. Even when it puts him in the line of danger, my Lee acts according to a strict moral code because he believes that deviation from it will result in chaos, and because he must set an example for the child in his charge. This leads to some significant hardship on his part, but he is confident in his decisions. There’s nothing requiring you to play this way: you could choose to be more opportunistic or vindictive depending on the situation; after all, isn’t surviving the most important thing at the end of the day? Even if it means somebody else doesn’t make it?

This uncomfortable middle ground between what is right and what is best in the face of absolute disaster is the emotional area that The Walking Dead wants to explore. Though it’s using zombies to get there, it’s not a horror game; the intent is to make you think about how you live your life rather than to raise the hairs on the back of your neck.