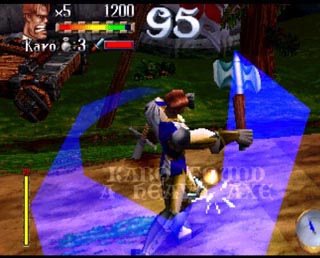 This game was once planned for North American release under the title Knights of Carnage. It was made the same people that did Burning Road for PSX and later Soul Fighter for Dreamcast. I like Legend because it is rare and it is a beatemup. The graphics are 3D and look old but the action is better.

You choose between three characters to travel through a series of areas kicking the daylights out of any monsters you encounter. Hand to hand combat consists of punch-kick combos with some throwing, while weapons are plentiful but wear out quickly. The magic system is a little difficult, as it requires you to press and hold a number of buttons at the same time and is a little hit-and-miss. When the magic system works, your characters are able to blast foes with fire or turn them into frogs. The monsters in Legend deserve special mention because there are just so many of them. You will battle orcs, dinosaurs, tigers, zombies, snake people,skeletons and many others. Akuma from Street Fighter and Goro from Mortal Kombat even make unpaid appearances. Legend rips off many myths and many games. If you want a brawler no one else has, Legend is for you. Sadly it is hard to find, and typically costs $20 to $25.

Aconcagua is a point and click adventure game. Before you cringe, it is very smooth and the action looks like Silent Hill or Resident Evil. Instead of directly controlling the character, you just direct him or her on where to go and what to do. The key to Aconcagua is having the right person, with the right item, doing the right things at the right time. Your group of plane crash survivors must band together and stay alive, and every member of the group has an important role in the game. What starts as a simple battle against the elements in the high Andes grows into story of politics and deception.

I liked the continuity of this game: all of the cinema was made using in-game graphics, the menus have a lot of English and pictures in them, and the voice acting is 75% English with the remainder being Spanish. This game is rare on the import market and generally overpriced. A good price would be $10 but it is often $30 or $40. Shop carefully. I enjoyed this game a lot. It has a good story to tell.

The Rally De series started with Rally De Africa in 1998. It was an arcade-style rally racer that successfully managed to capture the feel and fun of Sega Rally on the Saturn. However, Rally De Africa lacked the a Time Attack mode. Rally De Europe was released in 2000, and while I’m still waiting for them to add Time Attack, the graphics and car handling are much improved over the Africa version. The game lacks any official World Rally Championship cars but it uses convincing clones with fake names. The track design isn’t as well done as the classic tracks of Sega Rally, but the races are still fast and challenging.

The best part of Rally De Europe is the Zen-like control system. Gravel feels like gravel, tarmac acts like tarmac, and the powerslides and skids are dream-like. Diehard racers and beginners will both be pleased. After you complete all the Europe rallies (or cheat past them), a second game opens up: Rally De Africa 2000. This mode allows you to race on the old 1998 tracks with the 2000 game cars. In all that gives you 10 tracks and over a dozen cars. The game also has an exclusive feature called Memory Card Battle. It appears that you record a race on your card and then you email it to a friend via a Dexdrive file, sort of like a low-tech online challenge. Once you have your chum’s save, you can race against their ghost car.

Rally De Europe is rare on the import market. I suspect that there are many in Asia though. Increased demand for this game would probably make it more common. From an online store new it is $23. Secondhand on Ebay it should be under $10, if you can find it. If you really needed to get your racing fix and you can’t track down Rally De Europe, another option is WRC Arcade (PAL2NTSC code: D008 36C4 0001, 8008 36C4 0000), which is similar.

The original Overblood was a rough-around-the-edges (both in terms of graphics and gameplay) title that really wanted to be good. The team at Riverhillsoft really tried. Learning from the mistakes of the original and borrowing elements from games like Final Fantasy VII and Tomb Raider, the developer did the Overblood universe justice in the sequel.

Overblood 2 is a self-described 3D Action RPG. It has three playable characters and many NPCs. The charm of O2 is in the characters and varied game play. The British voice cast is very talented and often rises above the many clunky and cluttered moments in the translated script. The gameplay is awesome and appeals to players of many styles and skill levels. For example, at one point in the game you have to cross can electrified floor in an engine room. Depending on how you like to play, this puzzle can be solved in a variety of ways. If you like hunting for items, you could run around find shock proof boots. Dexterous players can try their luck on the moving clockwork over the dangerous floor. Alternatively, one could buy some cheap rubber boots in town and take some minor shocks, then use a health item. And players who like living dangerously could set a number of explosives behind their character and try to ride the blast over.

O2 has a lot of gadgets and game mechanics that are unique. One good example are the heat and freeze tabs you can collect throughout the game. Say you are surrounded by a pool of sharks. You could dive directly into the water and try to knife-fight them, or for 100 credits you could toss a heat tab in their pool and cause the water to boil and evaporate. A shark flopping on dry concrete isn’t going to swim up and bite anyone! Perhaps you being drawn by strong winds toward a moat of lava. By using a freeze tab, you can change the lava into a pane of cold glass, making it a lot easier to figure out how to turn off those pesky wind fans.

The graphics in Overblood 2 are plain but clear. The levels themselves are huge and heavily reward exploration. The controls are also good: jumping, running, shooting, swimming etc. can all be done with ease. When you are required to do a new activity, hints often pop up on screen, making the learning curve very gentle. The difficulty in Overblood 2 also adjusts itself as you play. No matter how many times you die, the game allows you to try again. If you keep screwing up a challenge like a boss fight or a junk blade race, the game will notice and make the challenge easier. Though such an adjustment will affect your score, it makes the game a much less frustrating experience.

Despite all of its cool features, Overblood 2 isn’t for everyone. The pacing is uneven and spots of the game are very slow. The PAL discs also have features that prevent them from being fully played on a NTSC console. Having a PC emulator with a good PSX clone controller is recommended. The game is common and can be found cheaply on UK Ebay. Download a save file for Overblood 2. 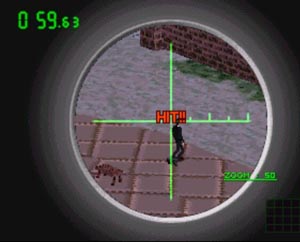 Most Simple 1500 games are terrible. This series is home to a large number of low-budget, low-fun titles. The Sniper is an exception. Though it was clearly made on the cheap, it offers a good concept and story with interesting gameplay.

In The Sniper you play Harry C Spencer, a hard boiled gunman. You have received a stack of contracts from a mysterious client only known to you as CA. The yen is good so you start assassinating key figures in the local crime gangs. After a briefing you pick a roof to shoot from and then wait for your victim. Your job is to find your target, aim carefully, and take them out. Though the premise is simple, some of the later missions become very hard. A fun training game is also available to help hone your skills. However, some of the gameplay assumes that you can understand Japanese, which means you’ll have to solve some missions by trial and error. Cheats for extra time and ammunition can be helpful if you are stuck. The Sniper is a great break from flashy, expensive import games. The steady pace and clear objectives mixed with a Hong Kong movie atmosphere make it an easy pick for me. The game is uncommon but shouldn’t cost more than $8, $10 max.