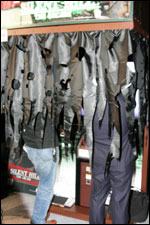 I’m sorry, I can’t not post this. Kotaku.com has a bunch of images from the new Silent Hill arcade game. You read that right. It’s a shooter, set in the Silent Hill universe, with lots of fog and film grain. And zombies. That’s like Silent Hill, right? Fog + film grain + zombies = winning formula, right? It even has Pyramid Head, whom you can apparently shoot, despite his blatant invulnerability to guns in Silent Hill 2. But hey, it’s got the Silent Hill logo on it, so it must be great, right guys?

Making a shooter out of a horror game is probably pretty tough. I’ve not really been impressed with the Resident Evil Gaiden / Dead Aim series (though I should play both more to be fair). But for a game like Silent Hill, where shooting is infrequent and often actively discouraged, this kind of thing seems like quite a stretch. Though it is clearly an attempt to cash in on a popular license, I suppose I’m not as irked by this game as I could be: the arcade scene is a really tough market, and I can actually see that arcade games might not even be made unless they are insulated by some brand or license. Still, this looks pretty terrible. Maybe next time I am in Japan I can try it out.