The Secret of Monkey Island and most other adventure games relied on this kind of landscape shot.

One of the key elements in modern horror games is visual storytelling. I’m not talking about cut scenes or character design, I mean the nitty-gritty details of shot composition: lighting, camera placement, and camera motion. Today I want to talk a little bit about how the horror genre developed the idea of a cinematic camera in video games almost independently of the rest of the industry, and how the need to communicate feeling though the architecture of levels and the placement of cameras had profound effects on the way that these games are actually played.

I’ve touched on this topic before. I talked briefly about Alone in the Dark‘s revolutionary approach to cameras in my article about the history of the modern survival horror game, and I mentioned the relationship between fixed camera systems and character-centric control schemes in a recent provocative post. But it’s such an interesting topic that I thought I’d devote a post or two to it.

To understand how the horror genre was so influential in developing the visual systems now used by a wide variety of genres, it’s important to understand what the state of the art before horror games came along and why change was necessary. In the late 1980s and early 1990s, adventure games ruled the PC game market. Most of them, like the seminal The Secret of Monkey Island, were built upon flat landscapes populated by sprites. This was enough to show off the game world and the people in it, but the technology wasn’t sufficient to frame shots dramatically. 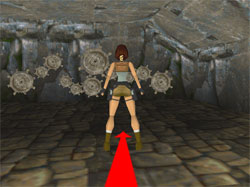 In games like Tomb Raider, “forward” is defined by the camera.

along comes Alone in the Dark and changes two important things: the camera system and the control system. Alone in the Dark took the flat 2D perspective of the adventure genre and projected it into proper 3D space. At the same time, the game provided players with direct control; instead of point-and-clicking to move around, players could use the keyboard to drive the protagonists around. A few years later this exact format was popularized on game consoles by Resident Evil, a game that was able to take advantage of the Playstation controller rather than the awkward keyboard.

But in transitioning from 2D scenes to 3D scenes, the developers of Alone in the Dark and Resident Evil faced a problem: how best to translate 2D input from the keyboard or controller into 3D space. After all, arrow keys or a D-pad can only represent two axes of movement; the software must pick a heuristic for translating that motion into 3D space. The common heuristic used by most 3D games then and now is to define a vector in 3D space that is “forward.” Tomb Raider, which shipped around the same time Resident Evil was hitting the shelves, used one of the first over-the-shoulder cameras and worked by assuming that the direction the camera was pointing was the direction that Laura Croft would move if the player pressed “up” on their controller. The mapping from 2D controller input to 3D movement was thus a projection along the orientation of the camera. As long as the camera stays generally behind the player’s character, “up” on the control stick will always mean “run forward towards the horizon.” Interestingly, this scheme 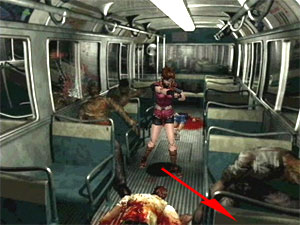 In games like Resident Evil, “forward” is defined by the character.

usually causes the player character to run in circles of you hold left or right on the control stick; when the camera is locked behind the player, any motion to one side causes the camera to move as well, redefining “forward” and creating a circle if movement to the side continues. You can see this effect in most third person games even today.

But Alone in the Dark and Resident Evil do not use cameras that are always behind the player. The whole point of Alone in the Dark’s camera system is to provide interesting and affecting points of view for the camera; the system would be moot if the camera were required to simply look in the same direction as the player’s character. So both games opted for the “tank control” model, where player input is mapped to the character’s orientation rather than the camera’s. In this scheme “forward” can be defined independently of the camera–up on the control stick will always cause the player to run in the direction that he is currently facing. By using this system the developers of Alone in the Dark and Resident Evil were able to mix 3D motion with dramatic cameras, and though the result was confusing and carried a high learning curve, the effect ended up being worth it to a huge number of gamers.

In the next post I’ll continue this discussion by talking about games in the late 1990s that made incremental improvements on the Alone in the Dark/Resident Evil model. I’ll also talk about how the model has changed over time, how more recent games have tried to deal with the need to move in 3D space with an unpredictable view point, and which titles now represent the state of the art.