One of the best ways to learn about game design is to play games that aren’t fun. While parsing a good game can be difficult, it is much easier to figure out why a bad game doesn’t work. Some games with good ideas get killed by bugs and other execution problems, and those aren’t very interesting. But sometimes I find a game that is functional and full of ideas, but isn’t fun. Those are the games where design lessons often lurk.

Curse: The Eye of Isis is an good target for study because it is technically competent but completely banal to play. Unlike some other terrible horror games, Curse’s software isn’t broken. All the parts needed for a proper Resident Evil: Code Veronica-style game are present and accounted for. There are some bugs and minor implementation problems, but for the most part we can ignore technical failures. This lets us focus on the real problem: the design.

Of course, some of the most annoying design problems are mundane. Curse is the kind of game that makes you open your inventory to select a key to unlock a door, even though you only ever have one key at a time. Its camera cuts between shots that point in opposite directions, which is disorienting. It is a fantastically easy game that I completed using only the default club weapon. There’s a boss that hurts itself with its own area attack. The design limits inventory space for no good reason, which makes completing the game a chore. And the story is, of course, nonsensical and rambling.

More interesting, I think, are the problems with the new designs that Curse brings to the table. You might not notice at first, but Curse has some odd ideas.

One oddity is that felled enemies emit a dangerous yellow curse smoke, which can reanimate other dead bodies in the area. There are bodies all over the levels of Curse, and I’m sure that the intent was for these corpses to come to life and attack the player. This happens once or twice in the game in controlled scenarios, but never during normal play. Perhaps the developers dropped the idea because combat isn’t fun and they needed to keep encounters short. I’m not sure, but the mechanic comes off as interesting but impotent.

Another idea involves using people instead of hot spots in the level to supply health and ammunition. Rather than finding ammo hidden in drawers or cupboards, you get it from corpses of gangsters that litter the area. Even a few keys and other items come from dead bodies. The idea, I guess, is that it’s more believable to find these items on a body than hidden in some alcove. This design is certainly one made in the name of “realism,” but the interesting implication is that items can move around.

It gets more interesting when we examine the save system. Instead of save points or auto-saves, you save by talking to a stereotypical Middle Eastern man named Abdul. As the player progresses, Abdul moves to meet him along the way, so it’s usually possible to save without traveling far. Abdul can even store items and weapons; he’s a mobile, all-in-one Resident Evil save room, complete with item box.

The core idea is that the level architecture doesn’t need to accommodate game play actions like saving. These actions fall to people instead of objects, perhaps because the developers felt it would make more sense. I mean, how many typewriters would you reasonably expect to find lying around a mansion like the one in Resident Evil? By moving ammo to bodies and saves to Abdul, the designers do not need to contort the environment to support these elements. In theory, this might produce a more believable game.

In practice, the environment is repetitive, hard to navigate, and quite boring. There’s no particular improvement in believability because other absurd game-isms persist. Save opportunities and ammo are both plentiful, so we never get a chance to judge the real potential of this system. Still, the idea to use people instead of the environment for item interactions is interesting.

This train of thought is evident in another design idea: character switching. As with just about every grandchild of Alone in the Dark, Curse allows you to play as two characters, a man and a woman. But unlike most other games, Curse allows you to switch characters in the middle of the game. In fact, the player switches characters several times throughout the story. Like Abdul, these characters show up periodically and can even exchange weapons and items.

But unlike the interesting-if-questionable save system, item swapping between playable characters has significant consequences. It throws a huge wrench into one of the core design constructs of this type of game: the puzzle dependency chart.

If you’re new to puzzle dependency charts, go read this fantastic article by the guy who invented them. In short, many Adventure designers organize their games as a series of locked gates. Unlocking a gate requires collecting a key item, which itself may be behind another gate. A good designer can force a player to access parts of the game in a pre-defined sequence without imposing a linear level map on him. By using a puzzle dependency chart, the designer can control exactly what the player has in his inventory at each gate point.

Curse follows a pretty simple (and linear, which is bad) puzzle dependency chain. Find the one locked door, get the one key, go to the next door, repeat. Every once in a while you will carry an item through several locked doors until you finally use it to unlock another door. As far as Adventure games go, it’s pretty primordial.

But the entire system is just chucked straight out the window with the character switching system. The two characters, Victoria and Darien, can swap items whenever they are in the same room. This feature robs designer of any certainty about whether the player is carrying the items that he needs to progress. Sometimes, if you end up with the wrong items, you can backtrack to the other character and swap. But often, Curse will cause the characters to switch and then immediately take one of them away in a cutscene. If you had the wrong items going into that cutscene, too bad! Your only recourse is to reload from a save.

It’s even worse with ammunition and weapons. At one point, neither of my characters were able reload their weapons because they held each other’s ammo. Sometimes you can predict that this will happen and stash weapons and ammo in Abdul. But even then there are times when Curse will strand items you need in an inaccessible character without warning.

The developers try to hack around this by putting items that you might need in Abdul’s inventory, but it’s a lost cause. They’ve spilled ink all over their dependency chart and are now trying to draw little lines around the stain. Limited inventory space compounds the issue. Late in the game I had to discard ammo for a powerful weapon held by Darien so that I could collect a key item for Victoria. Good thing it is trivial to beat every enemy with the club.

The biggest problem with this isn’t just that the player can screw himself. That happened to me once or twice, but it wasn’t a persistent issue. Usually the swapping of items was just an annoyance, a contrivance that wasted time. The design does break the game in various ways, but that’s not the most offensive thing about it.

The worst part about all this item swapping nonsense is that it makes the player think about the game as a system. Systematic thinking is exactly the opposite of what you want in a horror game. It reduces the simulation to a logic problem, albeit an annoying one, that the player just needs to solve. There is no hope of getting him to believe in the events that are occurring on the screen. And a logic puzzle puts the player is in complete control. If the game is just a pattern, any player that has figured it out is never going to feel frightened.

Curse: The Eye of Isis is a technically competent game marred by poor design decisions. Though boring, it’s not as frustrating as other mediocre titles, and that makes it good fodder for research. There’s no mistaking Curse for a good horror game, but that doesn’t mean it has nothing to teach us. 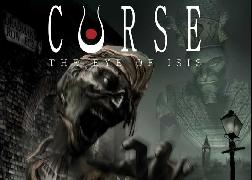 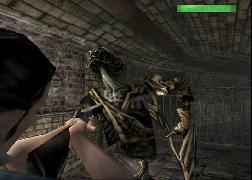 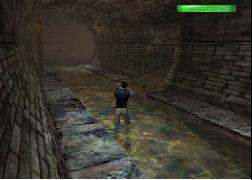 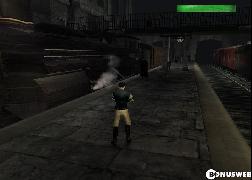 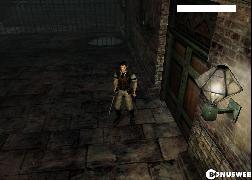