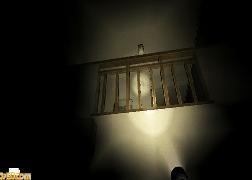 I don’t usually buy games on the day that they come out because a) I have a lot of games in my backlog already, b) getting caught up in hype is a bad thing, and c) the longer I wait the cheaper games get. But as I was ordering something of

You might have seen the trailer for Ju-On a while back. It’s a first-person Wii game based off the series of movies of the same name and supervised by the director of those films, Takashi Shimizu. Apparently the entire Western world mistook the developer’s logo as the name of the game, so you might have seen this title bouncing around news sites under the name “FEEL” (in fact, the name of the game is 恐怖体感 呪怨, kyoufu taikan juon, which is something like “fear sensation Ju-On”; the developer is a company called Feelplus). Anyway, it’s a first-person Wii game where you use the Wiimote to explore scary areas with a flashlight. Word on the street is that XSEED is bringing the game Stateside this year.

I’ve played the first episode and a bit of the second so far, so I thought I’d weigh in with some initial impressions. The game is well done, but it’s also exceedingly simple. You move around through the environment by pointing the Wiimote (on screen, a flashlight) in the direction you want to go and holding down the B trigger. This method of movement actually works really well; it’s so smooth that I thought the game was on rails at first. The side effect of this system, I guess, is that you move really slowly. There doesn’t seem to be a run button. Anyway, you move through the environment collecting items–particularly keys and flashlight batteries. If you run out of flashlight batteries it’s game over, but (at least in the first episode) they appear to be pretty plentiful. As you progress through the environment 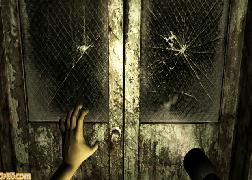 Ghost kid on opposite side of window: check.

various scary things will happen, mostly involving stuff falling near you for no obvious reason, the series’ signature cat-ghost-kid running by, or the Dead Wet Girl antagonist grabbing your arm. These are almost exclusively pop-out-of-the-dark scares, and they get old really fast. There’s a few legit scares here, and the environments are very well done, but once it’s clear that something sudden is going to happen every two minutes or so, it stops being surprising.

What’s really intriguing about this game is that I think that it’s designed to be played with friends. It’s a one-player game, but a second player can cause similar pop-out events to occur by pushing buttons on the second controller. To me this sounds like an attempt to recreate the feeling of watching a horror film with friends–especially for teens–and trying not to get freaked out. This is really interesting; I love the idea that the basic horror premise might actually be improved if you were to play with somebody along for the ride next to you. The complaints from review sites like Famitsu are that the game is very short (5 hours, they say), but if the purpose of the design is that it can be played in a sitting or two with friends, that length actually makes a lot of sense. Perhaps this is the way in which Shimizu has influenced the development of this game: it’s clearly designed not to be played alone, even though it’s a single-player game. I haven’t seen that before.

The other thing that strikes me about this game is that it’s very close to being a more modern incarnation of Hell Night. Not that it’s nearly as good as Hell Night; it misses the beat when it comes to sound, I think, and since avoiding death is fairly easy there’s very little of the pressure that Hell Night applies. But the system, the way that the game works and is played, is very similar. If nothing else this game could serve as a reference for how a more competent game might get started; the game mechanics seem solid and slightly wasted on this particular game.

As usual, I should note that I’ve only just started Ju-On and my impressions are subject to change. Stay tuned for a full review.