One of the things I learned while working on Dead Secret (big announcements coming soon!) is how complicated item combinations can be.  Combining items is a pretty standard Adventure game mechanic.  You allow the player to collect parts of an item from different locations, then combine those items into a new item that is necessary to progress.  Combine the herbs to make more powerful health items, combine the batteries with the flashlight to make it work again, combine the secret decoder ring with the mysterious page to read it.  If you’ve ever played any Adventure game you’ve probably combined some items at some point.

Horror games have used item combinations as a core puzzle mechanic since the very beginning, and it’s easy to see why.  Adventure games abiding by the puzzle dependency chart model allow the player to work on multiple problems simultaneously, but often need a synchronization point to gate progress.  Keys and locks get boring pretty fast, and item combination gives designers a way to make these synchronization points more interesting. 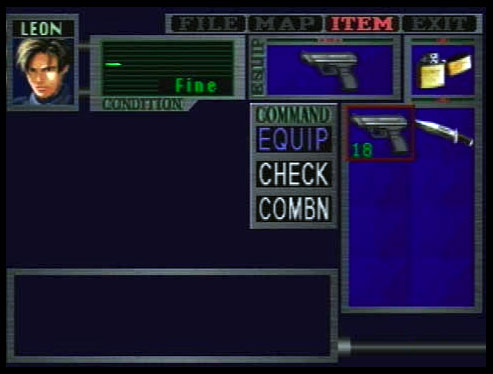 This all sounds simple on paper, but of course the devil lurks in the details.  In early Resident Evil games, item combination became part of your inventory management strategy.  In those games your inventory space is quite limited, so often you needed to combine items (shells, herbs, etc) just to free up inventory slots.  Inevitably there came a moment where you desperately needed to collect some item but didn’t have enough space for it, and item combination became an organizational tool.  Inventory management is a wonderful sub-game in the Resident Evil series, but from a production perspective it’s expensive to build.  You need UI to select items and combine them, some logic in the items themselves to determine when items and and cannot be combined, and maybe even some smart way to explain why certain item combinations are not good.  Resident Evil eventually implemented a number of changes to mitigate some of these complications.  For example, later games allow you to use a health herb without actually collecting it to get around the problem of death via full inventory.  Resident Evil 4 has hands-down the best inventory management system ever, but it’s also the most complicated to build.

More importantly, allowing player-controlled item combination makes it harder to communicate puzzles to the player.  If you want the player to combine the blade with the whetstone to sharpen it, then combine the sharpened blade with the hilt, then use the completed knife on the rope, you need to invent a reason that the blade can’t be used on the rope without the hilt.  You need to tell the player that the blade is too dull when he tries to use it on the rope without sharpening.  You need to invent a reason that the sharpened, completed knife can’t be used to cut other ropes, or as a weapon to stab the bad guy.  You must consider the possibility that your player doesn’t know what a whetstone is.  The more expressive your item manipulations become, the more the player will attempt complicated interactions.  It’s on the designer to come up with ways to respond to those attempts to avoid player frustration.

For Dead Secret, my goal was to keep item interactions as simple as possible.  In early design iterations items could only be collected or applied.  This kept the interface and communication requirements pretty reasonable.  But as we built out the game this simplistic item model became restrictive, so we changed it to allow for automatic item combinations.  When you collect all the necessary pieces of an object, the inventory system automatically does the combination work for you.  This approach has some pluses and minuses.  On the plus side, it keeps the UI simple but still allows for multi-step puzzles involving items that can be collected in any order.  This is particularly valuable in VR, where traditional user interface modes (e.g. the “pause screen”) don’t translate very well.  On the minus side, it removes the sub-puzzle of figuring out which item combinations make sense.  More importantly, it removes a degree of puzzle dependency control.  If parts for an item can be collected at multiple places, the item can be put together at any of those locations, and that has ramifications for progression.  There’s one spot in particular in Dead Secret where we had to do a bunch of work to accommodate this complexity in the dependency graph.

Overall I’m pretty happy with the system we ended up with in Dead Secret, but it isn’t nearly as simple as I had initially planned.  Items can be collected, automatically combined, used as one step of a multi-step puzzle, and even automatically used up.  There are items that can be applied in multiple areas, items that can be used independently, and items that are entirely optional to collect.  There are secret items that have no icon and no presence in the inventory screen.  A seemingly simple design has turned out to have all sorts of tendrils, extending deep into the mechanics of the core game.  Even so, the item system in Dead Secret is much simpler than many other Adventure games out there.

In leu of that, I’ll pose a question instead.  Take your favorite Adventure game, horror or otherwise, and consider the item system.  If you removed it entirely from the game, how much game would be left?

9 thoughts on “Tracing the Tendrils of Item Management”